The Law Society of Hong Kong (“the Law Society”) announced to its member in a circular on 11 December 2017 that the Solicitors' Hourly Rates (SHR) on party and party taxation in civil proceedings will be increased, effective from 1 January 2018 onwards. While the SHR does not govern the fees charged by solicitors to their clients (which is a matter to be agreed between them), this will mean that the winning party of an action can recover a higher sum of legal costs for work done by their solicitors from the losing party. The existing rates will continue to apply for work done by solicitors up to 31 December 2017.

The winning party of a case is usually awarded costs on a “party and party” basis by the court at the conclusion of a court case. Parties are required by Practice Direction 14.3 issued by the judiciary to attempt to reach an agreement on the sum of costs payable to the party entitled to the costs. Only if they are unable to do so should they proceed to “Taxation of costs” by a taxing master, whereby the court assesses the amount of costs payable at a sum it considers to be necessary or proper for the attainment of justice or for enforcing or defending the party’s rights.

The SHR is determined by the judiciary and serves as a guide to the hourly rates of solicitors of different seniority. While taxing masters are not bound by the SHR and may also take into account the merits of the case and parties’ conduct in the proceedings when assessing solicitors’ costs, they generally apply the SHR save for exceptional cases. The SHR is therefore also typically used as the basis on which parties negotiate when trying to settle the costs claimed.

However, the existing SHR has not been reviewed since 1997, during which there have been increases to the hourly rates charged by solicitors. This means that there has been a widening gap between the sum of legal costs that successful litigants can ultimately recover and the amount that they had actually incurred. They are left having to bear a greater portion of legal costs despite successfully bringing or defending its rights.

The Review of the SHR

Per the recommendation of the Law Society in 2013, the Chief Justice appointed a Working Party, who in turn engaged an independent consultant to review the SHR and also established an Advisory Group to provide support on the methodology of conducting surveys in relation to the review.

In their review, the Working Party mainly focused on the issue of the recoverability gap of winning parties in order to safeguard access to justice by potential litigating parties. They also took into account qualitative factors such as affordability of legal service and the level of fees regarded as acceptable by the public, views of stakeholders such as the Legal Aid Department, law firms of different sizes, the Department of Justice and consumers themselves, as well as the inflation rate.

Further, it was also recommended that the SHR be reviewed regularly every four years to take into account inflation, which shall be measured according to the Composite Consumer Price Index and monitored by the Judiciary.

The revised rates, which will apply in the taxation of solicitors’ costs starting from 1 January 2018, are compared and summarised as follows: 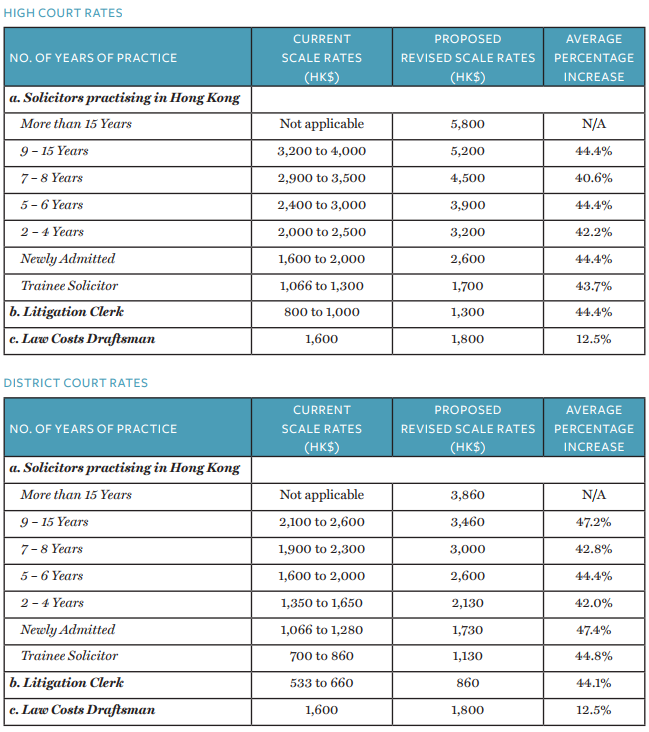 As can be seen from the above table, the average percentage increase of SHR for solicitors of each level of seniority will increase by more than 40% starting from 1 January 2018. Accordingly, this will be reflected in parties’ negotiations of the quantum of costs to be paid out to the winning party, or the costs to be allowed at taxation. This would mean that successful litigants would be able to recover a greater portion of legal costs they had incurred for defending their rights. At the same time, going forward, parties should also review their reserves for legal costs in civil litigations to take into account the revised standard by which costs will be assessed.

The practical impact of the above changes in SHR will need to be viewed in conjunction with the potential increases in jurisdictional limits of the District Court and Small Claims Tribunal in future.

As one may recall, in August 2015, the Judiciary issued a Consultation Paper on the Review of the Civil Jurisdictional Limits of the District Court and Small Claims Tribunal. In summary, the Judiciary proposed to increase the general financial limit of the civil jurisdiction of the District Court from HK$1 million to HK$3 million, and the limit for Small Claims Tribunal from HK$50,000 to HK$75,000.

The Law Society has in principle agreed to the proposed increases. If such increases of the Civil Jurisdictional Limits were to be implemented as proposed, that would mean some of the claims which are currently being brought in the High Court (and hence applying the High Court scale SHR) will then need to be brought in the District Court (and hence applying the District Court scale SHR).