SAP v Diageo in 2017 highlighted how customers can face unexpected charges where their licensed software interacts indirectly with other systems .Kemp IT Law partner, Deirdre Moynihan, looks at market developments since then and, in a world of tight budgets, how to avoid extra charges.

Contractual language to define the scope of permitted software use and to determine charging basis may have been agreed years ago. That language now finds itself applied to new technologies and interfaces in a way that was unanticipated when the agreement was signed. Increasingly, providers are scrutinising customers’ use of their software to ensure that use is in accordance with the terms of the licence and that the charges paid by the customers reflect actual usage of the software. This calls for a combined complex and nuanced legal and technical analysis to establish whether or not day-to-day use of the software is compliant with the permissions and restrictions of the applicable license.

This trend for heightened scrutiny of customer compliance with licence terms is the background to the 16 February 2017 judgment of Mrs Justice O’Farrell in a case between SAP UK Limited (“SAP”) v. Diageo Great Britain Ltd (“Diageo”).

Briefly, the facts are as follows:

In a trial on liability – but not the amount of damages – the English High Court ruled in favour of SAP:

o No ‘Named User’ category in the schedule applied to the type of access created by Connect to the SAP ERP as the Connect users “[did] not have access to source or object code. They [did] not have access to the functionality provided by mySAP ERP in support of the wider operation of Diageo’s business. They [accessed] business process functions and information from the database for the purpose of ordering products and managing their own personal accounts only.”[2]

o The amount of any additional licence fees due to SAP would need to be assessed during the damages phase of the trial.

• For Gen2 the court reached a similar conclusion.

• Therefore, SAP was entitled to charge Diageo for the access and use of the SAP ERP.

Following the decision and discussion and consultation with customers and industry, SAP launched a new digital pricing model for the “use” of its software.[3]

This new model gives customers the option to move to a new licensing and pricing model catering for:

• Direct/Human access, chargeable based on named human users; and

• Indirect/Digital Access, access via third party, Internet of Things (IoT), bots and/or other digital access: licensed based on number of transactions/documents processed by the SAP software. “Use” under the new model is defined broadly, as illustrated by Figure 1. Figure 2 shows the differences between the legacy and new digital access models.

Although SAP’s stated intention when introducing the new digital access model is to “make it easier and more transparent for customers to use and pay for SAP software licenses”[4], the new model remains complex and requires significant analysis to assess whether legacy customers should move to the new licensing model. Neither does the new pricing model reduce the requirement to critically assess whether the actual or intended use is permissible under the terms of SAP’s complex Software Use Rights. Casting a critical and circumspect eye over the relationship between the Ts&Cs and actual use is key – particularly as providers and customers grapple with the fast pace of technological development and the move towards cloud based, customisable, and interoperable IT systems easily accessed via APIs or browser interfaces. 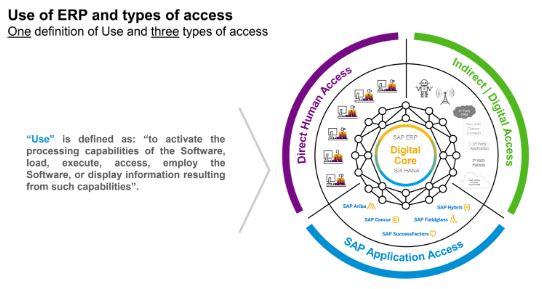 We therefore continue to recommend that particular attention is paid to the language used in Ts&Cs and how it may apply to different use cases or access rights. Customers should carefully review at the outset of the contract the nature and extent of the rights granted under any licence and the methodology applicable to the calculation of licence and maintenance fees. In these times of rapid technological change, customers should also consider putting in place a structured process to ensure that their use cases across the organisation continue to map to the licence grant and charging clause across the licence lifecycle. The issues for the software provider are the obverse – ensuring a genuine understanding by customers of licence scope and charging terms and backing up the primary contractual obligations with workable audit rights to verify compliance. For both sides, contractual terms dealing with the following issues should be express, precise and clear so that each party is aware of its obligations:

The analysis is not simply a matter of the legal team reviewing the Ts&Cs – a proper, measured and informed analysis requires a cross functional team of lawyers, software engineers, IT and other relevant business groups. It’s also not a once-off analysis at a single point in time – changes to use will need to be assessed against the existing use rights to ensure that no additional fees are payable.

This blog was first published as part of the white paper which you can read in full here: Algo IP: Rights in Code – 2020 Update

To view all formatting for this article (eg, tables, footnotes), please access the original here.
Kemp IT Law - Deirdre Moynihan
Back Forward