For many years the German Schuldscheindarlehen (a debt instrument governed by German law) has been an important element of the German domestic Corporate Finance landscape, but had hardly any international significance. Recently, however, the Schuldschein made an appearance on the international stage, and the “encore” calls are growing louder and louder. In 2018, only roughly half the volume of Schuldschein loans were placed for German corporates, with the other half stemming from international borrowers, predominantly coming from Austria, France, Benelux, Italy, the Nordic countries and the US.  The list of biggest Schuldschein transactions of 2018 reflects this trend: It  includes Rewe Group (food and holiday travel retailer, headquartered Germany with a deal size of: €1,000,000,000) and Faurecia (international automotive parts manufacturer, headquartered in France with a deal size of: €718,915,589).  Most recently, in February 2019, Barry Callebaut, one of the world’s largest cocoa producers, headquartered in Zurich, successfully placed its first Schuldschein with a value of €600,000,000.  This transaction is particularly noteworthy, because Barry Callebaut had been a repeat issuer in the US-High-Yield Bond Market for many years, issuing under New York law, but into the European market. It should be highlighted that, despite the fact that Schuldschein loans are governed by German law and are traditionally denominated in Euro, there have been lots of USD, GBP, Swiss franc and also Renminbi Schuldscheindarlehen.

Internationalisation was not the only development in the Schuldschein-Market. Long a lending product reserved for investment-grade or high-quality non-rated issuers, the search for yield has opened the market for higher-risk borrowers. As a result, the Schuldschein market has not been immune from high profile financial restructurings such as those of Steinhoff International and Carillion PLC in early 2018  and more recently, the German fashion house, Gerry Weber, which filed for insolvency after failing to repay part of its Schuldschein loans.   These defaults are indicative that as the market grows, investors should be wary of conducting their own credit analysis on issuers, with more than three-quarters of the market remaining publicly unrated in 2018.

Nonetheless, the Schuldschein private-debt market is set for at least €25,000,000,000 in issuance in 2019 with factors such as shaky markets enticing issuers to private placements over public bond issues, continued deal flow from frequent issuers and uncertainty around the strength of the M&A market in light of rising geopolitical risks all playing a part.

What is a Schuldschein?

Schuldscheindarlehen are loans governed by German law, which are structured in a way that creates some similarities to debt securities. The documentation is built around an underlying loan agreement. For each lender, usually a separate borrower’s certificate (Schuldschein) is issued, stating the loan receivable for that lender. Usually, such a borrower’s certificate contains the entire loan terms. Also, a form of transfer certificate is attached to the loan agreement and there is an agreed transfer mechanism, usually restricted to very high minimum amounts (such as multiples of EUR 1 million) to avoid fragmentation of the investor group. The borrower’s note has an evidence function and thus allows for easier enforcement, but it does not constitute a security under German law. Thus, a transfer of the certificate does not give any rights to the new “holder” – the transfer does require a formal assignment. More importantly for the placement process: Since this is a loan, not a security, Schuldschein-transactions are exempt from the obligation to publish a prospectus under the EU-Prospectus Regulation. A Schuldschein is also not an instrument which could be listed.

Schuldscheindarlehen are usually raised for general corporate purposes or working capital purposes, carry a maturity of between two and ten years and have floating or fixed rate interest options. Through using Schuldscheins, borrowers are able to gain easy and inexpensive access to medium to long-term financing from capital markets investors (banks, insurers, pension funds, investment management companies) that cannot always be reached through bank financings.

Parties to a Schuldschein

The parties normally comprise the borrower, the guarantor (if any), the investor(s) (acting as the lender(s)) and one or more banks acting as arrangers and who also sometimes assume the role of primary lender.  The borrower will usually instruct a paying agent as it’s agent in respect of the borrower’s payment and information duties. The paying agent is not a party to the Schuldschein loan agreement but instead, enters into a separate agreement with the borrower.

Differences between Schuldscheindarlehen and syndicated loans

Schuldscheindarlehen also tend to be comparably light in covenants, compared to syndicated loans. In part, that is a consequence of the investment grade history of the product and will have to be reviewed if the structure is used for higher-risk credits. Given the (intended) lack of a collective decision mechanism, however, maintenance covenants in particular, are likely not to be practical for Schuldschein-transactions. 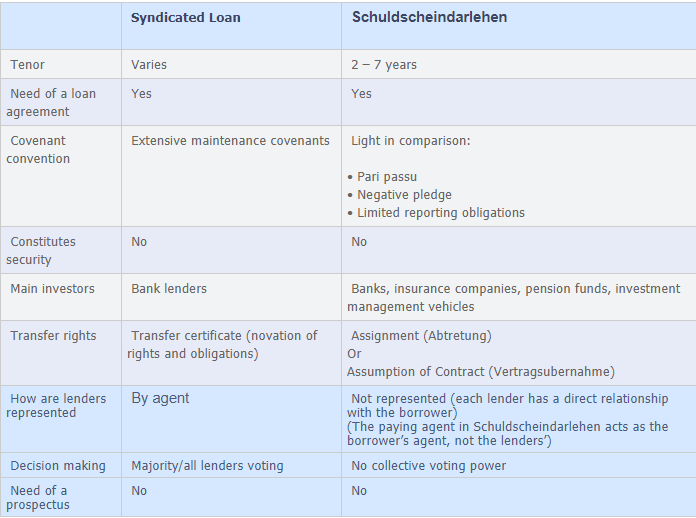 In light of the growing market and demand for a standard format, a Loan Market Association working group have produced recommended templates for Schuldschein loan agreements (the ‘Schuldschein Documents’) which aim to represent a reasonable and balanced position for the interests of both lenders and borrowers.

The Schuldschein Documents, available in both German and English, have been prepared on established typical format of a Schuldschein loan agreement and serve as a useful starting point for preparing contract documentation. There are currently two Schuldschein documents available on the Loan Market Association’s website, one with, and one without, an integrated (downstream) guarantee and each may be used to create a stand-alone contract. Regardless of the language, the Schuldschein Documents are governed by German law. It is important to note that, though the documents themselves are relatively short in nature, they are underpinned by German civil law provisions including the German Civil Code (‘Bürgerliches Gesetzbuch’, ‘BGB’) and such provisions as lenders’ termination rights (s. 490 BGB) and early termination rights of floating rate loans (s.489 BGB).

The process of putting a Schuldschein in place normally commences by a borrower agreeing a term sheet with one or more arrangers. The arranger then markets the Schuldschein loan to potential investors on the basis of the documentation agreed with the borrower. Potential investors have approximately four to six weeks to make a lending decision.

Several characteristics of the provisions of Schuldscheindarlehen and generally are:

b) Majority lender decision making: Schuldscheindarlehen do not include majority lender decision making. In the event of a transfer of parts of the Schuldschein loan, bilateral  contracts between the lender and each transferee are concluded. Each lender is individually responsible for the administration of its Schuldschein loan and has an individual termination right.  Unlike a syndicated loan, there is no agent or lead arranger who acts on their behalf;

c) Guarantee and security: Whilst Schuldscheindarlehen usually contain a negative pledge and may be guaranteed, they are ordinarily unsecured and specify that creditors will rank equally with other creditors ; and

d) Not securities: Although Schuldschein loans are not classed as securities under German law, it is possible that they may be classed as ‘Securities’ for the purposes of the US Securities Act 1933 and this assessment will need to be made on a case by case basis .

In order to improve the administrative burden of placing Schuldschein loans, platforms to facilitate the process have recently started to appear and will no doubt contribute to the growth of the sector as the placement process becomes quicker and cheaper. Further, such platforms will allow for reduced transaction costs facilitating smaller scale issues, increased scope of internationalisation of the investor base and a standardised communication medium.  An example of such a platform is HSBC Germany’s launch of ‘Synd-X’ in July 2018, being a digital platform for the issuance of Schuldscheindarlehen, bringing companies and investors together directly and with the aim of establishing a new market standard for issuing the documentation.  HSBC’s platform is also an example of an arranger specific/bank sponsored model whereby one bank facilities its own Schuldschein business. Other potential options would be a central marketplace model open to all arranging banks active in the Schuldschein market (such as vc trade (https://www.vc-trade.de/en) or alternatively, a broker model which would bring together issuers and investors directly without the involvement of an arranging bank (such as firstwire https://firstwire.market/en/). Blockchain platforms are also starting to develop and in October 2018, Erste Group and ASFINAG announced the first end-to-end digital issuance of a debt financing instrument in Europe via such a platform, a €20,000,000 Schuldscheindarlehen.

Such new platforms and blockchain based capital markets issuances are offering a competitive edge due to their time and cost efficiencies and will no doubt help advance Schuldscheindarlehen amongst issuers and investors alike in the months and years ahead. The ease of executing such transactions, of course, should not tempt investors to shorten their credit risk analysis.

Schuldscheindarlehen can be an attractive financing option for companies that require medium to long-term financing in the amount of approximately EUR20 million to EUR500 million. The products can be used to finance investments, acquisitions, real estate, projects or core current assets. Also because Schuldscheindarlehen are issued through private placement like method instead of public offerings of securities, borrowers gain greater control over the investors pool and the relationships. Schuldscheindarlehen can also be used in conjunction with other types of financing options, representing one of the capital market components of the overall funding structure (often with intercreditor arrangements put in place among various Schuldscheindarlehen, syndicated loan and bond holders).