The parties to this case are: 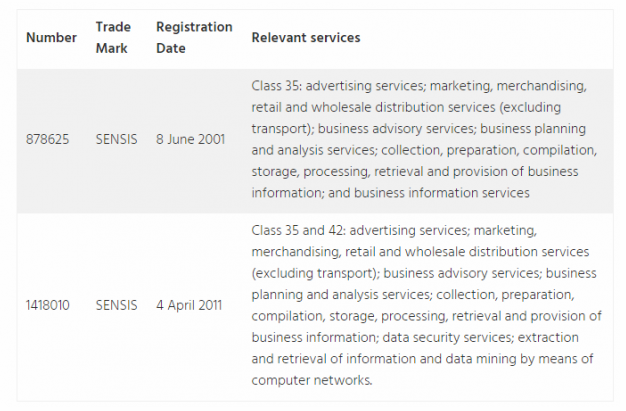 In February 2016, the Respondent applied to register the following trade mark for a range of services including marketing services and business marketing consulting in Class 35:

The Respondent denied the infringement claim in relation to the SENSIS DIRECT trademark. However, they did not contest the claims relating to the SENSES DATA trademark.

The Respondent also cross-claimed against the Applicant for the removal of certain services from their registrations for non-use.

Are the marks deceptively similar?

The first issue to be considered in this case is whether the marks are deceptively similar.

This issue is a question of the impression that persons of ordinary intelligence and memory would have of the mark SENSES DIRECT based on their recollection of the applicant’s mark SENSIS.

It is also important to note that the deceptive similarity analysis in the context of trade mark infringement can only be undertaken by reference to actual instances of use of SENSES DIRECT by the Respondent.

The Judge in this case was sufficiently satisfied that the SENSES DIRECT mark is deceptively similar to the SENSIS marks. In reaching this decision, he noted the following:

Does the Respondent have a defence to Infringement?

One defence to infringement in Australia is where the Court is of the opinion that the infringer would obtain registration of the relevant trade mark in his or her name if the person were to apply for it (s 122(1)(fa) of the Trade Marks Act 1995).

The Respondent argued that if their use did amount to infringement, they could use this defence on the basis that they could establish honest concurrent use i.e. that they adopted their marks honestly and that they had used their marks for a significant period of time, without any instances of confusion arising.

However, a big issue in this case was the question of when this defence is to be assessed.

The Respondent believed that it should be assessed as at the date of filing its actual application (which was 2 February 2016). If this was not accepted, they argued the following alternate dates:

In contrast, the Applicant argued that the defence is to be assessed as at May 2013, which is when the first alleged infringing conduct occurred.

Both parties submitted arguments in support of their case. However, the Judge agreed with the Applicant and held that the assessment is to take place at the date on which the first alleged infringing conduct occurred.

In any event, it was held that the Respondent would not have succeeded in establishing honest concurrent use of the mark. While the judge accepted that the Respondent adopted the SENSES marks honestly, he decided not to exercise his discretion to register the mark, primarily due to the high degree of confusion that was likely and the inconvenience to each of the parties.

Did the Applicant have a sufficient reputation to preclude registration of the SENSES DIRECT trade mark?

The Applicant asserted that even if the Respondent could establish honest concurrent use, that they should still not obtain a registration of their SENSES DIRECT mark due to the significant reputation the Applicant has obtained in Australia.

To succeed on this ground the Applicant had to establish:

Based on the evidence lodged, it was found that the Applicant’s reputation did not extend to services beyond directory services. Accordingly, the decision was that s60 would not apply to preclude registration of the Respondent’s SENSES DIRECT mark. However, ultimately this finding was redundant, as the Respondent failed to establish honest concurrent use.

As a side note, the judge also had no hesitation in confirming the decision of Kenny J in McCormick & Company Inc v McCormick (2000) 51 IPR 102 that honest concurrent use is not a defence to grounds of opposition under section 60 (likelihood of confusion based on reputation). While the judge’s comments had no effect on the outcome of the case (section 60 not being made out in any event), it is interesting to see that this authority is still being challenged.

The Respondent also cross claimed against the Applicant for removal of certain services from the SENSIS marks for non-use. In particular, the Respondent sought to have the following exclusion added the Applicant’s class 35 services (“the proposed excluded services”):

To defeat the non-use action, the Applicant had to show that they had used the SENSIS marks between 11 July 2013 and 11 July 2016, in connection with the proposed excluded services.

The Applicant argued that they had sufficient use based on their evidence showing use in respect of services which facilitate the sending of direct mail marketing services through data validation and deduplication services known as MacroMatch offered by Sensis Data Solutions. However, the Respondent argued that this use did not amount to use of the mark on the proposed excluded services and made the following comments in their closing submissions:

MacroMatch is necessarily agnostic as [to] the type or format of data it is washing, and the use to which it might be put. The data could be used for “customer service and support”, “telemarketing campaigns”, “customer data projects” and “CRM Programs” as well as direct mail marketing. Further, the applicant does not use the data after it has been “cleansed”; it returns it to the customer and swiftly deletes it. Therefore, the applicant never makes use of the data to any particular end, it merely provides a service to cleanse data. It is up to the customer to then use the data itself, or go to a third party provider to use the data.

Based on the information available, the Judge came to the conclusion that the differences submitted by the Respondent are immaterial because both services involve the provision of data processing services that enable a customer to undertake their marketing activities.

As such, the Judge ruled in the Applicant’s favour.

It was also found that the public interest favoured the exercise of discretion not to remove the proposed excluded services for the following reasons:

A summary of the key points in this decision are:

This case highlights the importance of conducting due-diligence prior to using or applying to register a trade mark in Australia, to minimise the risk of a dispute occurring once significant money has been invested in a brand.