CfD Allocation Round 3: Another step towards subsidy-free renewables?

Earlier today, the Department of Business, Energy and Industrial Strategy (“BEIS”) announced the allocation of Contracts for Difference (“CfDs”) in the third CfD Allocation Round (“AR3”). Successful applicants, each with a target commissioning date within the 2023/24 or 2024/25 delivery year, will be issued with their CfDs shortly, whereupon they will have ten working days to return their signed contracts (based on the published timetable all CfDs are expected to be signed by 4 October).

Successful offshore wind projects include three Dogger Bank projects (total estimated capacity 3.6 GW), Sofia Offshore Wind Farm (also located on Dogger Bank and with a total estimated capacity of 1.4 GW), and the Seagreen Offshore Wind Farm (estimated capacity 454 MW). Four remote island wind onshore wind projects located on Orkney and the Western Isles have been successful, with the balance of capacity made up of two ACT projects. As with the second allocation round (see last year's article), only the “less established technologies” were eligible to participate in AR3, though AR3 saw the notable addition of remote island wind.

BEIS has proceeded with the AR3 process despite an ongoing judicial review application lodged by Banks Renewables. Based on the challenger’s press release, the claim contests the exclusion of onshore wind from the technologies eligible to participate in AR3. The AR3 timetable was pushed back by two weeks in light of the challenge giving the bidders two extra weeks to decide whether to proceed with bidding their strike prices into the sealed bids auction. While successful bidders will be expected to sign their CfDs in the coming days, this judicial review process creates some ongoing uncertainty for both the CfD parties and BEIS. 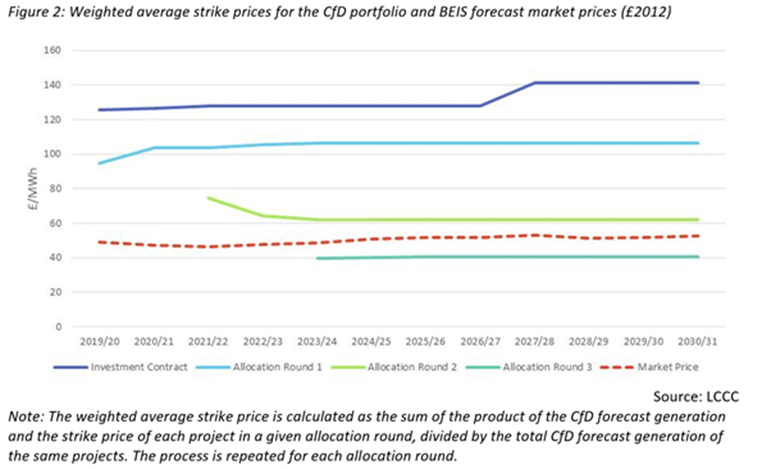 It will therefore be interesting to see how the government proceeds in the future auctions and what this price trajectory will mean for future projects. As “less established” technologies move closer to grid parity, the questions around affordability and the need for a subsidy (such as the £557m pledged for further CfD auctions in the Government’s 2017 Clean Growth Strategy) will come to the forefront.

CfD generator signatories will then have various obligations to fulfil in the short term following signature. In particular, they will need to satisfy their initial conditions precedent within ten business days and demonstrate the required degree of financial/project commitment within the first year.

In terms of when the next allocation round is likely to occur: BEIS announced last year that it anticipates that CfD allocation rounds will be called for less established technologies once every two years.