PRS landlords: What you need to know about the Residential Tenancies (Amendment) (No.2) Bill 2018

2019 is likely to be another strong year for private rented sector (PRS) investment transactions, with market observers estimating that institutional funds are set to invest over 7bn in the Irish PRS market. Potential developers, investors and funders should be aware of the Government's proposed changes to residential landlord and tenant law contained in the Residential Tenancies (Amendment) (No.2) Bill 2018.

The Bill is intended to give legislative underpinning to a number of actions outlined in the Government's Strategy for the Rental Sector published in December 2016 and the review of Rebuilding Ireland conducted in late 2017. The Bill's key provisions include:

The Minister has stated that he hopes to introduce Government amendments to the Bill dealing with:

PUBLICATION OF RENTAL AMOUNTS ON THE RTB REGISTER

The RTB currently publishes a tenancy register which includes information on the address of a tenancy and the number of bedrooms. When the Bill was published in December 2018, the Minister confirmed that the proposal to publish rental amounts on the RTB register was receiving due diligence by the Office of the Attorney General to ensure that any measure will be legally sound from a data protection perspective.

The Minister's officials, as well as officials in the Department of Education and Skills and the Attorney General's Office, are working on a proposed amendment to extend the application of certain provisions of the Residential Tenancies Acts, particularly those connected to rent setting, to purpose built student accommodation let under licence by private providers or let under licence or tenancy by public providers. This proposal could have significant implications for the student accommodation sector where licensing arrangements are the norm. Genuine licences, as well as dwellings let by or to public authorities (which includes recognised educational institutions), currently fall outside the application of the Residential Tenancies Acts.

WHEN WILL THE BILL BE ENACTED?

The Bill has been referred to the Select Committee on Housing, Planning and Local Government where a detailed examination will be carried out and amendments may be made. In Dil debates, the Minister stated that the Bill is intended to focus on priority proposals to facilitate quick passage through the Oireachtas with a further rent reform Bill to follow. Given the current focus on Brexit-related matters, it remains to be seen how quickly this Bill will be progressed. 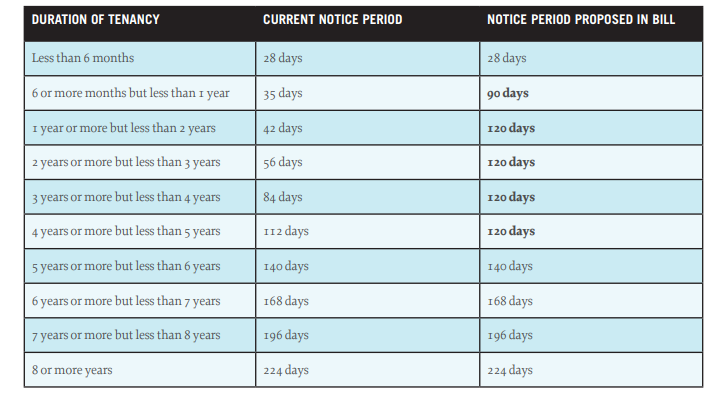