PRIIPS Regulation: What is in store for UCITS funds?

After a tumultuous early start in life, the finalised draft technical standards amending granular rules currently applicable to PRIIPS KIDs (Level 2 Measures)1 were finally adopted by the European Commission last month and are currently subject to scrutiny by the European Parliament and the Council of Europe.

The European Commission proposes the revised Level 2 Measures will apply to all PRIIPS KIDs from 1 July 2022. So why is this development causing UCITS management companies throughout the EU to sit up and take note?

In a “quick-fix” amendment being made to the PRIIPS Regulation itself2, the European Commission has also proposed that a PRIIPS KID be prepared in relation to UCITS which are marketed to retail investors in the EEA from 1 July 2022.

If implemented as proposed by the European Commission, this would require all in-scope UCITS management companies to provide EEA retail investors with a PRIIPS KID from 1 July 2022 onwards, a task which should not be underestimated given the significant differences between the PRIIPS KID and the UCITS KIID which is currently produced.

In a separate quick-fix amendment proposed by the European Commission to the UCITS Directive, the obligation to produce a UCITS KIID under that directive will be deemed satisfied where the UCITS provides a PRIIPS KID which complies with the PRIIPS Regulation. This is in order to avoid a scenario where a UCITS is required to produce both a UCITS KIID and a PRIIPS KID.

In this briefing, we analyse the scope of this obligation, provide an overview of the key features of the PRIIPS KID, highlighting where it differs and where it aligns with the UCITS KIID and outline next steps which should be taken by in-scope UCITS management companies as they implement their transition plans over the coming months.

No. As noted above, the European Commission has proposed that UCITS management companies managing UCITS that are marketed to EEA retail investors be required to prepare a PRIIPS KID from 1 July 2022.

However, the Economic and Monetary Affairs Committee of the European Parliament (ECON) has, in considering the quick-fix amendments to both the PRIIPS Regulation and the UCITS Directive, proposed amendments to both pieces of legislation3 which would delay the relevant provisions from taking effect until 1 January 2023 in order to give stakeholders sufficient time to prepare for the obligation to produce a PRIIPS KID. The revised time-frame proposed by the ECON must now be considered by the Council of Europe.

For the purposes of this briefing, we refer to the relevant application date as being 1 July 2022 although if the revised timeframe as proposed by ECON is approved by the Council of Europe, readers should be aware that the application date will be pushed out to 1 January 2023 (Application Date). We will keep readers updated as and when any further clarity on this emerges.

In what circumstances will a UCITS management company be required to produce a PRIIPS KID?

Pursuant to Article 5 of the PRIIPS Regulation4, a PRIIP manufacturer5 will be required to draw up a PRIIPS KID in respect of the UCITS and to publish it on its website, before making that UCITS available to retail investors in the EEA.

The decision tree on the next page should help UCITS management companies in establishing whether or not they will be required to produce a PRIIPS KID from the Application Date. 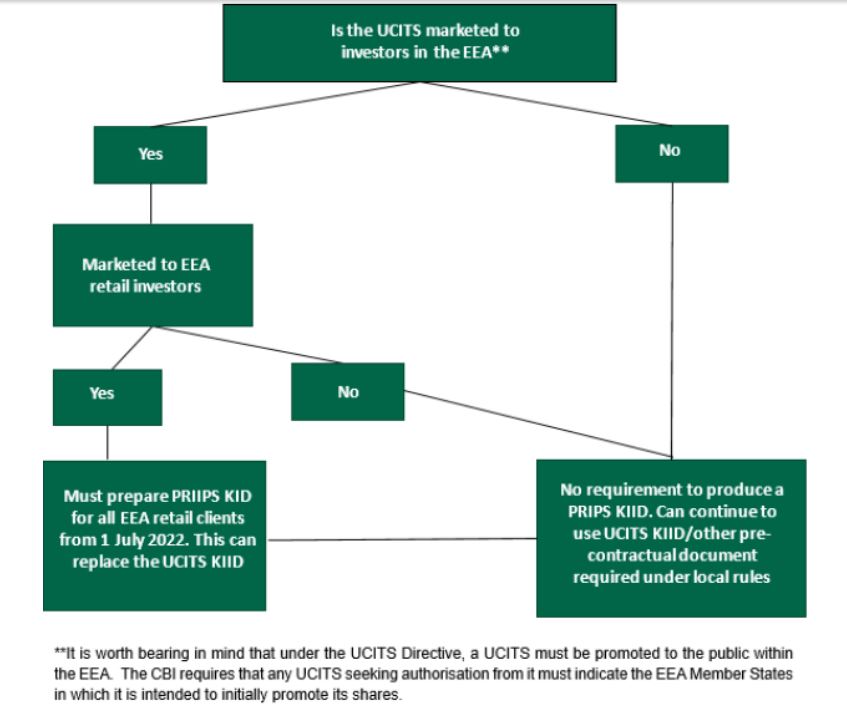 A UCITS will be required to prepare a PRIIPS KID to the extent that it is marketed to “retail clients” in the EEA. What is meant by a “retail client” for this purpose?

In essence, a retail client is any investor which does not fall within the definition of a “professional client” under MiFID rules. As a result, a UCITS which markets exclusively to entities regulated as banks, investment firms, asset managers, insurance companies or other funds (including pension funds) in the EEA or under equivalent third country rules or to high net worth individuals who meet certain qualitative or quantitative requirements will not be required to prepare a PRIIPS KID on the basis that the UCITS is not marketed to “retail clients” within the EEA.

What are the key differences between the UCITS KIID and the PRIIPS KID which UCITS management companies should be aware of?

In the table below, we outline the principal differences between the two categories of pre-contractual document, as well as identifying where existing UCITS KIID disclosures can be recycled in the PRIIPS KID. A further analysis of some of these provisions is set out subsequent to the table.

As noted above, the “Costs over Time” table must include a summary total cost indicator figure which is intended to illustrate how costs reduce the investor’s return over the holding period, assuming an investment of €10,000.

The narrative accompanying this figure must explain that the total costs figure will vary depend on how much is invested, how long the product is held and how well the product does.

One significant change from the UCITS KIID is the requirement for a PRIIPS KID to disclose transaction costs, expressed as a percentage of the value of the investment per year. This figure must be calculated on an annualised basis, based on an average of the transaction costs incurred by the UCITS over the previous 3 years. A different methodology must be used where the UCITS is in existence for less than 3 years11. This new disclosure obligation will mean significantly greater data collection and verification of such data on the part of in-scope UCITS management companies.

A UCITS KIID must disclose detailed information on the past performance of the relevant UCITS.

While the PRIIPS KID itself is not required to contain past performance information, the revised Level 2 Measures oblige UCITS funds to disclose not only forward-looking performance scenarios but to also include a link to the website (or a reference to the document) to provide access to information on the past performance of the relevant UCITS.

This follows significant pressure from a number of the ESAs, including ESMA, which publicly expressed the view in October 2020 that any PRIIPS KID which did not contain past performance information would be “detrimental to retail investors”12.

Helpfully, the past performance information which must be referenced in the PRIIPS KID must generally be calculated in accordance with the relevant methodology currently applicable to UCITS funds under the UCITS KIID rules.

As noted above, there are some key distinctions between the calculation methodology to assess the volatility of a UCITS portfolio which must be used for a UCITS KIID and that which will be required to be used in a PRIIPS KID.

Unlike the SRRI calculation used in UCITS KIIDs, the SRI calculation which must be used in PRIIPS KIDs includes a credit risk dimension.

Because of the fundamental difference in calculation methodology used, the SRI disclosed for a UCITS in its PRIIPS KID is likely to be lower than the SRRI figure disclosed by that UCITS in its UCITS KIID to date. This does not mean that the UCITS is less risky as the lower number is simply as a result of the different calculation methodology being used. Where a UCITS is sold via MiFID investment firms, consideration should also be given to whether this revision of the SRI figure will impact on the categorisation of the UCITS under MiFID product governance/target market requirements.

Under the PRIIPS regime, in scope UCITS funds must include forward looking performance scenarios which provide an indication of expected performance of the UCITS in four different scenarios:

The Level 2 Measures set out different rules for the calculation of each of the above different performance scenarios depending on the product/category/availability of historical data.

For UCITS which do not have sufficient historical data, a benchmark (proxy) can be used to supplement the values of the PRIIP.

Many EU insurance providers offer “multi-option products” with UCITS as underlying investment options e.g. unit linked insurance products. These “multi-option products” or “MOPS” must also produce a PRIIPS KID under the PRIIPS Regulation. To date such product providers have been permitted to rely on the UCITS KIID produced by the underlying UCITS funds in order to meet certain disclosure obligations under the PRIIPS Regulation. However from the Application Date, it will no longer be possible to use the UCITS KIID to discharge such disclosure obligations. While the relevant underlying UCITS will be required to produce a PRIIPS KID from the same date, the providers of such multi-option products will have insufficient time to update their own PRIIPS KID to comply with the new disclosure obligations from the same date if the UCITS itself only makes its own PRIIPS KID available from that date. UCITS management companies managing UCITS which are offered under such MOPs can expect significant engagement from insurance companies over the coming months as industry grapples with practical implementation issues arising from the fact that insurers will want to ensure that they are in a position to comply with their own disclosure obligations under the PRIIPS Regulation from the Application Date.

In the UK, a statutory instrument has been signed into law which extends the exemption afforded to UK UCITS management companies from being required to prepare a PRIIPS KID until 31 December 2026. In the explanatory memorandum which accompanied the publication of the statutory instrument, HM Treasury explains that UCITS providers will need to continue to produce a UCITS KIID for the next five years, rather than being required to move to produce a PRIIPS KID from 31 December 2021.

Action to be taken

UCITS management companies should initiate a PRIIPS KID implementation project to the extent that this has not already begun. Such a transition plan is likely to incorporate some or all of the following:

(i) Conducting a mapping exercise of the marketing and distribution strategy applicable to UCITS under management to determine whether a PRIIPS KID must be prepared for each UCITS from the Application Date;

(ii) Identification of internal team tasked with responsibility for implementing the transition plan, any external resources which the UCITS management company will engage to support it through the transition to PRIIPS KID and related budgetary forecasting and approval;

(iii) Assessment of each of the relevant provisions of the PRIIPS KID(s) to identify changes to existing disclosure requirements applicable under the UCITS KIID regime;

(iv) Identification of all new data points required and where such data will be sourced (whether internally, from delegates or from third party service providers). This will range from data required to populate the forward looking performance scenarios, data required to calculate the SRI based on the PRIIPS methodology and data needed to revise all costs disclosures in line with the Level 2 Measures;

(v) Testing of all relevant calculations required to be carried out under the Level 2 Measures;

(vi) Designing the template PRIIPS KID in line with Annex 1 to the Level 2 Measures and identifying and making changes to IT software and other systems (if this is being managed in-house) or identifying the appropriate software provider if relying on a third-party service provider (bearing in mind the continued focus of the Central Bank on operational resilience as outlined in its recent consultation paper);

(viii) Arranging for translations of the PRIIPS KID(s) where relevant and updating relevant websites to add the new PRIIPS KID(s) from the Application Date;

(ix) Engaging with the UCITS distributor(s) to ensure that they are required to provide retail investors in the EEA with the relevant PRIIPS KID(s) from the Application Date; and