Readying loan documents in a world without LIBOR

It has been two years since the Financial Conduct Authority (UK) (FCA) announced that it will not compel banks to submit to the London Interbank Offered Rate (LIBOR) beyond 2021.[1]

As this deadline draws closer, regulators and industry bodies are urging market participants to prepare for the transition with increasing intensity.

FCA’s Chief Executive, Andrew Bailey, recently commented that firms delaying transition are making a mistake.[2] The CEO for Asia Pacific Loan Market Association (APLMA) has also stressed that “time is now of the essence” and that members need to be informed of the upcoming “seismic changes”. Domestically, the Australian Securities & Investment Commission (ASIC) has written to major financial institutions imploring them to undertake a comprehensive risk assessment in respect of their exposure to LIBOR.[3]

Following on from our previous article The end of an institution: LIBOR’s death, we take a closer look at the developments surrounding the transition away from LIBOR, with a focus on the implications for loan documentation.

Will LIBOR cease to exist?

The FCA has stressed that the base case assumption should be that there will be no LIBOR publication after end-2021. The FCA expects the LIBOR panel to dwindle or disappear as a result of bank departures.

The administrator for LIBOR has expressed some willingness to continue publishing LIBOR provided there is ‘voluntary support from the banking industry’.[4] However, even if it does continue to exist for a period, the FCA has warned there is a high probability it will no longer pass regulatory tests of representativeness.

Working groups in different jurisdictions have now each identified an overnight risk-free rate (RFR) for their currency. Each RFR is at different stage of development, as highlighted in the table below. 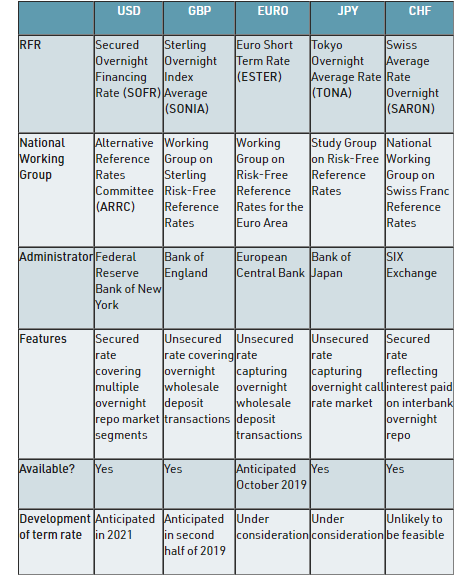 The RFR is only an overnight rate, unlike LIBOR, which is available in various term lengths. The RFR, anchored in active and liquid market transactions, is inherently risk-free and so lower than LIBOR (which accommodates credit and term risks).

Are existing loan documents equipped to deal with the transition?

APLMA produced facility agreement terms are widely accepted as market standard in the Asia-Pacific region. Although these include a fallback mechanism should LIBOR not be available, this fallback was designed with a temporary unavailability in mind, not a permanent cessation of LIBOR.

The current fallback typically offers several alternatives to apply in a waterfall fashion, including:

The Interpolated Screen Rate will be ineffective where banks cease making submissions and the LIBOR becomes unavailable for variable term lengths. Similarly, the Reference Bank Rate will be impractical in an environment where banks are reluctant to offer quotes.

The Historic Screen Rate is problematic as it would fix the interest rate instead of offering a floating rate reflecting lenders’ financing costs.

The Cost of Funds is undesirable for borrowers as the financing cost will no longer be based on an objective benchmark and the lenders may pass on increased financing costs caused by circumstances particular to them.

How can loan market participants prepare for the transition?

The first facility for a non-financial corporation referencing SONIA debuted on 1 July 2019, but the loan market still lags behind other financial markets (e.g. derivatives, bonds and securitisations) in its transition to RFRs,[5] due to the difficulty in reconciling the differences between RFRs and LIBOR.

As RFR is only an overnight rate, interest amounts can only be determined at the end of any given interest period. This is troubling for both lenders and borrowers for cash flow management purposes. Operationally, borrowers also require several business days to prepare payments of any fixed sum.

Different methods have been proposed by industry bodies to overcome this issue, including:

There is a push for development of forward looking term interest rates based on the RFR, using derivative transactions that reference RFR, provided that there is sufficient liquidity. SONIA is the most advanced in developing the Term Sonia Reference Rate, with the national working group advising it may be available in the second half of 2019. In contrast, the national working group for SARON has stated that the development of such a derivative-based term rate is not currently feasible.

There is also a substantial uncertainty regarding the viability and timeline for RFR term rates. As the FCA has warned, transition is not just about new business but also about converting legacy LIBOR contracts before fallbacks are triggered. Regulators and industry bodies are stressing that RFR term rates will not be the primary avenue for transition and are urging market participants to proceed with their transition plans to RFR without waiting for RFR term rates to become available.[6]

In Europe, the Loan Market Association (LMA) updated its Recommended Revised Form of Replacement Screen Rate Clause and User Guide in May last year,[7] expanding the application of the ‘Replacement of Screen Rate’ clause to broader circumstances including:

The revision also introduced a concept of ‘Replacement Benchmark’ to which the parties will transition, being the benchmark rate:

In the USA, the Alternative Reference Rates Committee (ARRC) has also published two sets of contractual provisions called the ‘amendment’ approach and the ‘hardwired’ approach to prepare new syndicated loan documents for a transition to SOFR.[8]

Both approaches are designed to replace the USD LIBOR where it becomes indefinitely unavailable or no longer representative.

The ‘amendment’ approach does not prescribe a successor rate but offers a process for the parties to agree to a replacement benchmark.

In contrast, the ‘hardwired’ approach prescribes the replacement options below to apply in a waterfall fashion:

The adjustment is to address the pricing difference between LIBOR and the replacement rate to reduce the transfer of economic value between parties. Where none of the prescribed rates above are available, the provision falls back to the ‘amendment’ approach.

The adoption of the LMA or ARRC proposed clauses are not automatic and must be voluntarily entered into by the parties. For existing loan documents, amendments will be required.

Other issues for loan market participants to consider

Loan documents often do not exist in isolation, and simultaneously with amending the rate applicable to the loan, any hedging transaction will also need to be amended (if possible) or alternatively terminated (which may trigger break costs) and fresh hedges entered into.

As LIBOR is used in a broad range of commercial (i.e. non-financial) contracts, those contracts will also need to be amended. New contracts (facility agreements and otherwise) referencing LIBOR continue to be produced.

Market participants would be well advised to consider referencing RFRs for new contracts, identify any contracts that include LIBOR clauses, evaluate their position and prepare for negotiating amendments to documents. For complex cross-border transactions, negotiations may be more protracted than expected, and the clock is already ticking.

The content of this publication is for reference purposes only. It is current at the date of publication. This content does not constitute legal advice and should not be relied upon as such. Legal advice about your specific circumstances should always be obtained before taking any action based on this publication.

How the extended SMCR will affect regulated firms