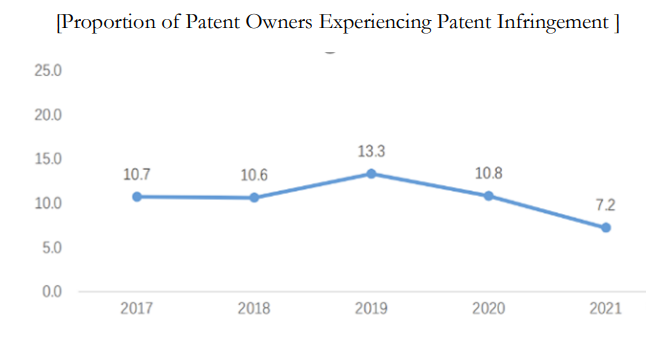 Second, the proportion of patent infringement cases with high compensation in China has increased significantly.

In 2021, 16.3% of China's patent infringement litigation cases were concluded with a compensation of more than 1 million yuan awarded by the court, through court mediation or outof-court settlements, 9.0% higher than the previous year, signifying that the cost of conducting intellectual property infringement keeps increasing in China. 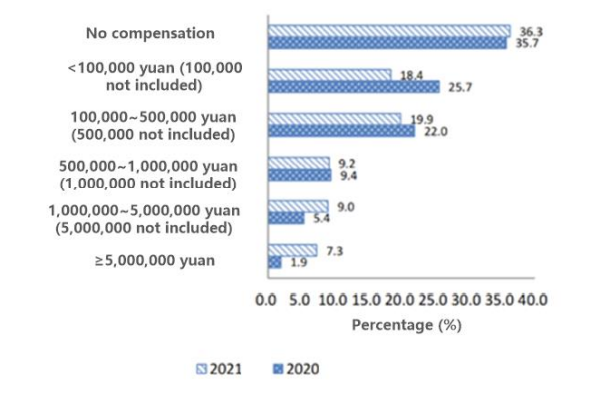 In 2021, 30.8%of patent owners encountering patent infringement in China chose to protect their rights by filing lawsuits to the court, 21.5% by requesting administrative ruling, and 18.6% through arbitration and mediation, an increase of 4.4%, 2.8% and 2.2% over the previous year respectively. Among them, 48.3% of patent owners chose at least two ways to protect their rights, signifying that the diversified mechanism for resolving intellectual property disputes in China is constantly improving.

In 2021, 3.0% of Chinese enterprises encountered overseas intellectual property disputes, nearly four times that of the previous year (0.8%). Enterprises of different scales all experienced an increase in that proportion compared with the previous year, among which large-scale enterprises have seen the largest increase, up by 6% year-on-year, reaching 8.7%. At the same time, the survey found that 71.8% of overseas intellectual property disputes occurred in the manufacturing industry.

Intellectual property rights have increasingly become the focus in international economic and trade frictions and in competitions of industrial and supply chains.