Replacing Reed? Rep. Tom Reed (R-NY), a member of the House Ways and Means Committee, resigned from Congress last week. As of this writing, Republicans have not indicated when—or whether—they will fill the vacancy left by Reed’s departure for the duration of the 117th Congress.   Should committee Republicans elect to replace him, the Brownstein Tax Policy team has profiled below certain members who have previously been floated as potential candidates to join Ways and Means. The profiles include tax legislation proposed by each member as well. This list is not exhaustive. As speculations continue leading up to the midterm elections, Brownstein will profile other potential replacements who could be named to the panel. 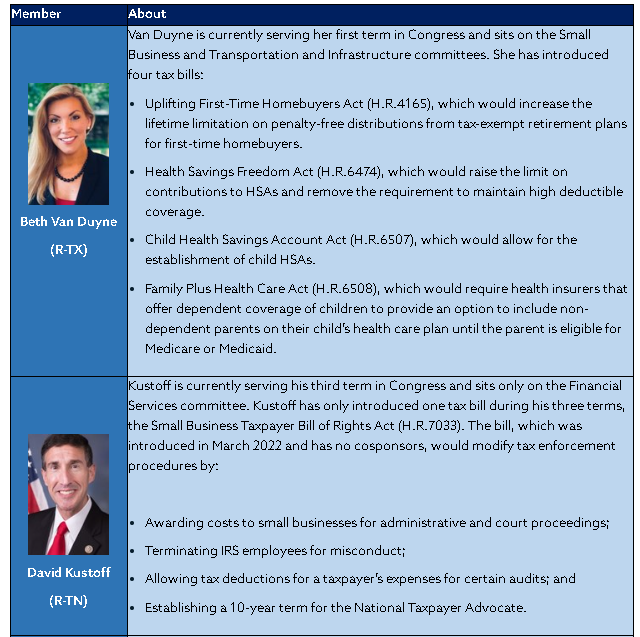 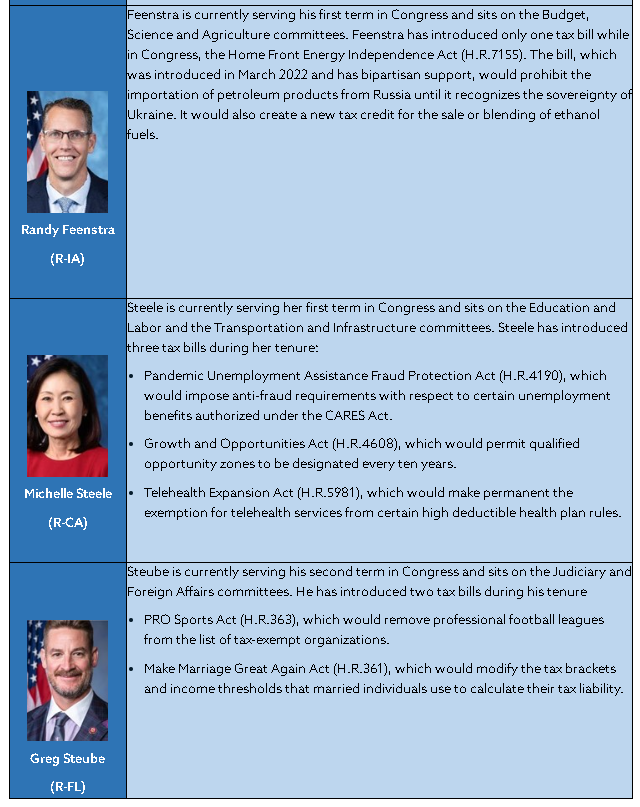 Conferees Wrestle Over Tax Title. The formal conference process to iron out differences between the America Creating Opportunities for Manufacturing, Pre-Eminence in Technology and Economic Strength (COMPETES) Act (H.R. 4521) and the U.S. Innovation and Competition Act (USICA, S. 1260) officially began last week. Over 100 conferees met on Thursday for a kickoff meeting, during which every member was given two minutes to make an opening statement. Those statements made clear that one of the more contentious issues will be whether to include a broader tax title in the bill.   Many of the key conferees from the two tax-writing committees support the inclusion of a measure that would provide a tax incentive for semiconductor fabrication facilities in the United States. The Facilitating American-Built Semiconductors (FABS) Act (S. 2107/H.R.7104), introduced by Senate Finance Committee Chair Ron Wyden (D-OR) and Ranking Member Mike Crapo (R-ID) and House Foreign Affairs Committee Ranking Member Michael McCaul (R-TX), would provide a 25% tax credit for investments in a domestic semiconductor manufacturing facility. While he is not a cosponsor, House Ways and Means Committee Chair Richard Neal (D-MA) has also vocally supported the FABS Act.   Other Senate Finance Committee members are supportive of the FABS Act as well, including Sens. John Cornyn (R-TX) and Mark Warner (D-VA), who were both instrumental in other core components of the legislation and will have significant influence during the conference process.   Wyden and Crapo also support another provision that would renew the ability for companies to immediately deduct all research and development expenses. Prior to the start of the conference, the Senate approved a related, but nonbinding motion to instruct (MTI), that urges conferees to include the R&D provision. The MTI was sponsored by Sen. Maggie Hassan (D-NH) and was approved 90-5, with only Sens. Cory Booker (D-NJ), Ed Markey (D-MA), Elizabeth Warren (D-MA), Mike Lee (R-UT) and Bernie Sanders (I-VT) opposing.   There is concern among some conferees, however, that if either or both these provisions were included, it would provide an opportunity for other members to attach additional tax measures, leading to a broader tax title that would complicate political dynamics and threaten passage of the underlying legislation. In this camp, House Ways and Means Committee Ranking Member Kevin Brady (R-TX) said last week that he sees “no need for a tax title in this conference report, especially one favoring a single industry.”   Similarly, Rep. Dan Kildee (D-MI), who has previously advocated for including relief for auto companies that use “last-in, first-out” accounting measures and are facing unexpected tax issues due to the effect of the chips shortage and vehicle availability to restock inventory levels, said last week that “if [a tax title] slows this down in any meaningful way, when it's already going to be a tough task to get this thing to the President's desk, then I'd have a real concern.”   Were a tax title to be included, Rep. Adrian Smith (R-NE), who is running to replace the retiring Brady as the top Ways and Means Republican, said it would have “to be about more than just chips.” This approach could prove problematic, though, as suggested by Crapo, who said last week that “the broader issue for both of them [the FABS Act and R&D credit] is if you start putting any tax items into USICA, does that open up the floodgate for everything?” Cornyn could have a similar opinion that a tax title should not be included if it threatens the larger package, as indicated by his comments last week that if the Senate has “to come back at a subsequent time and pick up the tax credit, we should do that.”   Secretary Yellen Testifies on Tax. Last week, Treasury Secretary Janet Yellen testified before the House Financial Services Committee and the Senate Banking Committee to update Congress on the Financial Stability Oversight Council, a body responsible for identifying and responding to threats to financial stability. Although she was not appearing before the tax writing committee, she did comment on some tax issues.   For instance, in her appearance before the Senate Banking Committee, she addressed the ProPublica taxpayer information leak that has been under investigation for months. Yellen said she could not provide any updates on the investigation, saying she is “anxious to see some results” as well. She characterized the leak as “very damaging” and said a number of bodies, including the Treasury Inspector General for Tax Administration and multiple law enforcement agencies, are looking into the matter.   In the House Financial Services Committee hearing, Rep. Roger Williams (R-TX) asked Yellen about recent efforts by certain members of Congress and industry to urge the Treasury Department to revisit its December 2021 guidance on Foreign Tax Credits. Williams explained that as a result of the regulations, “income and withholding taxes that have been credible for decades are no longer eligible” for the FTC. After arguing that the regulations could incentivize U.S. companies to move overseas, he asked if Yellen would be willing to reopen this rulemaking. In response, Yellen asked about which rulemaking Williams was referencing, but was not given a chance to answer before the next member on the committee began speaking.

Concern Over 30 Million Documents Deleted. The Treasury Inspector General for Tax Administration (TIGTA) issued a report last week that highlighted ways in which the Internal Revenue Service (IRS) could better promote electronic filing by business taxpayers. The report has gained much attention since it revealed that the IRS eliminated roughly 30 million paper documents it uses to identify taxpayers who do not accurately report their income. The report has caused an uproar among industry stakeholders and members of Congress.   According to the IRS, the agency eliminated these documents because it could no longer process them and had to begin implementing programming changes for the upcoming filing season. The agency said in a statement Friday it deleted the forms because of the COVID-19 pandemic and that it would not take similar actions for tax years 2021 and 2022. The agency also said that no taxpayers were harmed by the destruction of the returns.   Practitioners are concerned that the IRS may have incorrectly imposed penalties on taxpayers whose documents they threw out, thinking they had not been delivered to the IRS. However, the IRS said in its release that taxpayers will not be subject to any penalties because of the form deletion.   The House Ways and Means Committee has begun investigating the matter. Committee Chair Richard Neal (D-MA) said last week the committee wants “more information” and that it wants “to make sure there are no penalties that are imposed on anybody because of what happened with those documents.” Committee Ranking Member Kevin Brady (R-TX) also said last week that he has asked the IRS for a briefing on the impact the IRS decision will have on the agency and the public and if it has done anything similar in the past.   Rep. Bill Pascrell (D-NJ), who chairs the Ways and Means Oversight Subcommittee, has taken a more personal approach and called for the immediate replacement of IRS Commissioner Charles Rettig. He issued a press release last week that said “President Biden must replace Mr. Rettig immediately and also nominate a Chief Counsel for IRS.” Pascrell separately told reporters that he is “not going to recognize him as the director because he’s not acting like one.”   Rettig is again appearing before Congress this week and will likely face questions on the topic. He is testifying Wednesday before the House Appropriations Committee on the fiscal year 2023 budget request for the IRS.   CTC Portal Reopened. The online portal designed to help low-income taxpayers receive the expanded Child Tax Credit, enacted under COVID-19 legislation last year, reopened last week. Although the portal, GetCTC, only launched in September 2021, it was taken down in early 2022 after concerns were raised that it might cause confusion during the tax filing season. Code for America, which worked with the Internal Revenue Service on the portal, said in a statement that the portal “helps low-income families who often face barriers when filing tax returns that require more, and sometimes complicated, documentation."