Damaged Hair Care Products: The Root of the Problem

On September 7, 2018, Olaplex, LLC and LIQWD, INC. (collectively, “Olaplex”) filed suit in the United States District Court for the Southern District of Florida against Verbena Products, LLC d/b/a BEAUTYVICE and Robert Roque (collectively “Beautyvice”) based on Beautyvice’s sales of Olaplex hair care products. Olaplex alleges that the products sold by Beautyvice do not bear certain codes that Olaplex includes on its products.

Olaplex manufactures hair care products, and sells them through a network of salons and distributors, on Olaplex’s website, and through retail partners, such as Sephora. All of Olapex’s products come affixed with a product code, such as a QR code, which enables consumers to access information about the product. The QR code offers consumers the opportunity to purchase more products online or identify physical locations where the product is available. Olaplex’s codes also indicate the date a product was packaged and provide traceability from the moment a unit is produced to the point of consumer purchase. Olaplex alleges that its codes are critical to anti-counterfeiting and quality control efforts. Examples of Olaplex’s products are shown below: 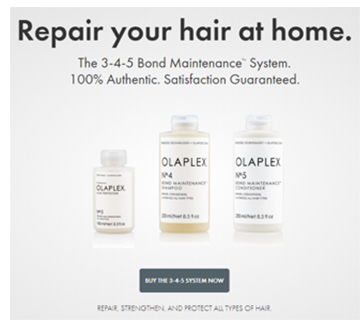 Olaplex alleges that Beautyvice sells products bearing the OLAPLEX marks through Beautyvice’s website and through its Ebay account, without Olaplex’s authorization. As shown in the picture below, Olaplex’s product (right) bears a QR code while Beautyvice’s product (left) lacks a QR code. 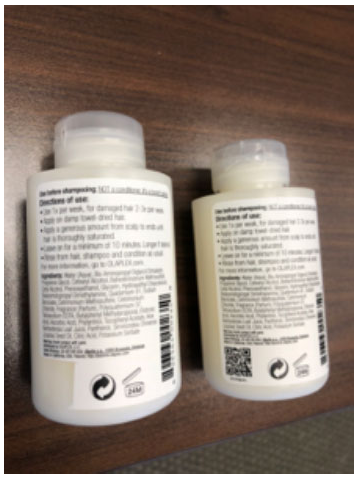 Olaplex alleges that in most cases it cannot tell whether the products are manufactured by a third-party and never included a QR code or if someone removed the QR code from a genuine Olaplex product that has been diverted or stolen from authorized distribution channels. Olaplex further alleges that the genuine products which are decoded are generally sold by distributors not authorized to sell in the U.S. and are frequently mixed with products bearing the OLAPLEX marks that are manufactured by third-parties. Olaplex alleges that Beautyvice removes the codes and other anti-counterfeiting measures from thousands of Olaplex products per year.

Olaplex argues that the absence of the QR code and mutilation of the packaging are material differences, and thus, Beautyvice’s actions constitute federal trademark counterfeiting, federal trademark infringement, federal unfair competition, common law trademark infringement and unfair competition. Courts have found that if there is a material difference between the unauthorized imported products and the authorized imported products, then the imports are not genuine products and can create a likelihood of confusion. When product codes are essential to a brand owner’s quality control efforts, the removal of the code can constitute a material difference. See Davidoff & Cie SA v. PLD International Corp., 56 U.S.P.Q.2d 1753, 2000 WL 1901542 (S.D. Fla. 2000), aff'd, 263 F.3d 1297, 60 U.S.P.Q.2d 1046 (11th Cir. 2001).

So what lessons can be learned from this lawsuit? Brand owners may be able to take action against third-parties who are selling products diverted from authorized distribution channels if there is a material difference between the authorized and unauthorized product. The material difference does not have to be a significant difference in the physical appearance of the product or packaging or the composition of the product. It can be a difference that impedes the brand owners’ quality control measures. To police the sale of unauthorized products with hard-to-discover differences such as the removal of codes or certain labels, brand owners should vigilantly police the Internet, and conduct test purchases of products on a regular basis. Authorized distributors and sellers should be careful not to tamper with the product or its labeling and packaging.