Overall, patent, utility models and industrial design growth was negligible, plant varieties grew by 11.7 % and trade marks grew by 26.8%. It is the first time the geographical indications figures were published and data on global publishing revenue or figures was attempted (by survey).

How did Australia fare?

Compared to the larger IP Offices, Australia, Canada, India and the U.S. reported a high share of non-resident filings. Australia had negative growth rate of women inventors in PCT patents (-3.6%), average patent examiner experience was set at 9.8 years and the average age of a patent in force in Australia is 7.7 years.

Australian residents IP activity was ranked out of 150 countries.

The ability of patent right holders to enforce their rights when those rights are infringed is an important aspect of a valuable patent system. Generally the report is fairly silent on patent litigation decreasing in the US and EU an increasing in Asia.

It was interesting to read WIPO’s comparison of the major jurisdictions (where Australia is similar to the UK) was particularly interesting in terms of costs. (figure below) 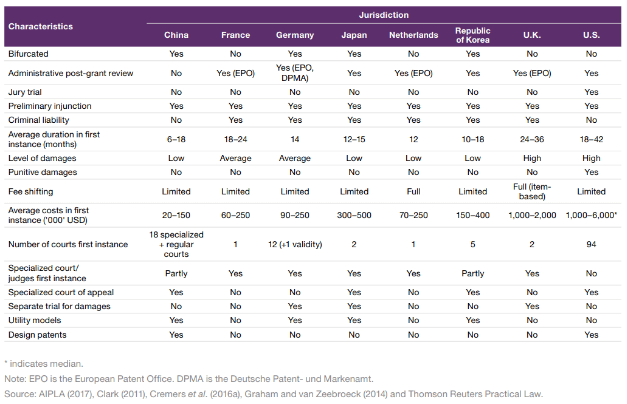 Technology most likely to end up in patent litigation? (Helmes 2018)

What were the global filing trends?

a) Patents – China growth (no growth in US/Japan)

Asia strengthened its position as the region with the greatest activity in patent filings.

Inventors filing patents abroad came from: U.S, Japan, Germany, the Republic of Korea and China. Patent applications were most likely to be rejected in UK/US and accepted in Australia and Russia.

Technologies most featured in patent applications: 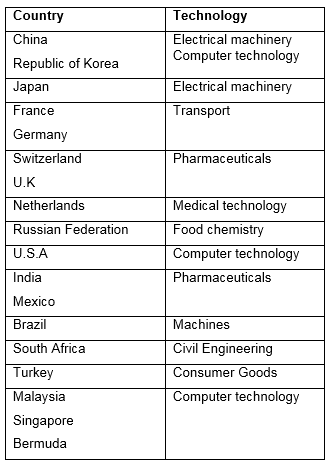 b) Trade Marks – Asia growth (no growth in US/Japan)

Asian Offices accounted for 66.6% of all trademark filing activity in 2017. Europe’s share declined to 17.7%, North America to 6.4%, while the combined share of Africa, Latin America and the Caribbean, and Oceania was 9.2%.

Countries with the highest volumes of filing were:

Trade marks were filed in:

The Nice classes can be grouped into 10 industry sectors. Low filings were chemicals & transport, highest industries were:

c) Designs – Applications are growing and China has 50.6% or worldwide share

Aside from China, increases in designs were: UK, Spain, Switzerland, EUIPO and Japan.

Designs were frequently filed for:

The major industries filing for designs were:

d) Plant Varieties – China grew over 50% to be the top filing office, US dropped

e) Geographical Indications – Germany has the largest no. in force

GIs are signs used on products that have a specific geographical origin and possess qualities or a reputation that are due to that origin, such as Gruyère for cheese or Tequila for spirits.

There were 4,932 European Union GIs in force in each of the EU member states.

GIs in force related to:

Revenue generated by the three sectors (trade, educational and scientific, technical and medical) of the publishing industry of 11 countries was surveyed and amounted to USD 248 billion. This data is incomplete, however the U.S. sold 2,693 million copies of published titles in 2017, followed by the U.K. (647 million), Brazil (617 million) and France (430 million).