The government has agreed to enact the Third Parties (Rights Against Insurers) Act 2010 (Consequential Amendment of Companies Act 2006) Regulations 2018. This snappily titled Regulation will seek to amend a discrepancy which restricted the ability of insurers to restore dissolved companies to the register for the purposes of a contribution claim.

Under the Compensation Act 2006, if a defendant is liable for any proportion of a claimant's mesothelioma then they will fund 100% of damages.  A claimant will often focus their efforts on a defendant company for which insurance cover can be traced.  The defendant may be dissolved and the insurer may then take the decision to settle the claim without restoring the company to the Register.

If the insurer, having settled the claimant's claim, wanted to issue proceedings for contribution from another employer, it would need to restore its insured client to the Register (the rights of subrogation not having been engaged with an inactive company).  The Regulations seek to allow insurers to step into the shoes of a dissolved company for the purposes of bringing a contribution claim and avoid the 6 year limitation period for Restoration under s.1030(4) of the Companies Act 2006.

The Regulations are yet to be approved by committee.

Context:  Under Fairchild, if a defendant had made a material contribution to the claimant's risk of developing mesothelioma then it would be liable in damages.  In Barker the House of Lords suggested that the liability of the employer could be apportioned by reference to the exposure.  The position in Barker was reversed by the Compensation Act 2006 so that if a defendant made a material contribution to the risk, then it would be liable for 100% of the damages.   Apportionment as between insurers and insureds was considered in IEG v Zurich and any apportionment should be on a time exposed to risk basis.

Reinsurance: The next logical step for the court was to consider the arena of reinsurance and in this case 2 questions were posed:

(1)  Could MMI (the reinsured) present claims to a reinsurer of choice, so called "spiking"? (2)  If MMI could "spike" the claim how would the respective liabilities be calculated?

In the first instance Flaux LJ, sitting as judge-arbitrator, considered that it was possible for MMI to "spike" the claims and that the liability would be apportioned on an 'independent liability’ basis. This method involved apportioning the loss for which the "spiked" reinsurance contracts were liable between the retentions and the various layers of reinsurance in each of the applicable years of reinsurance cover, in proportion to: (i) the amounts that would have been borne by each such layer or retention if the whole claim had been presented to each relevant year, and (ii) the relative amount of exposure which occurred in each relevant year.

The Court of Appeal has granted permission for appeal under s.69 Arbitration Act as it was accepted there were serious concerns as to the reasoning of Flaux LJ.  The decision in this case and whether or not cases can be "spiked" and if so, how the risk is to be apportioned will be of significant interest to reinsureds and reinsurers facing mesothelioma claims.

The HSE have produced updated mortality data from mesothelioma for the period 1968-2016. The document can be found at: http://www.hse.gov.uk/statistics/causdis/mesothelioma/mesothelioma.pdf

The most recent data suggests that we remain in the peak of the expected mesothelioma deaths with the trend continuing at around the current level until the early 2020s before starting to fall away: 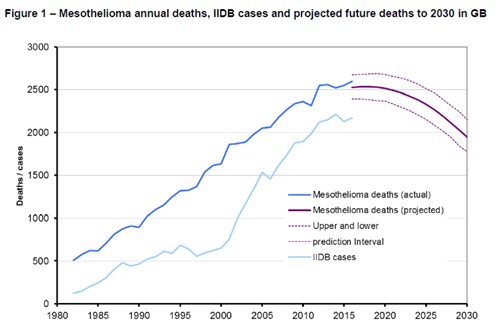 The report shows that in general the profile of male sufferers of mesothelioma are 80 or more years old (see figure 3(a)) and women sufferers are likely to be between 75 and 84 years old (figure 3(b)).  As one would expect the number of sufferers at young ages are generally showing as falling.

The HSE predicts that the rate of deaths from mesothelioma will continue at around 2,500 p/a for the remainder of this decade.

Background – an employee, Mr Merritt, was employed as a painter and decorator from 1975 to 1986 and developed mesothelioma as a result of exposure to asbestos.  The employing company was wound up in 1996 but was insured by RSA for the last 6 months of Mr Merritt's employment.  As the sole insurer on risk for the defendant RSA settled the claim for £173,750.00 inclusive of damages, costs and CRU.  The date of settlement was 17 January 2011.

Post settlement of the claim ELTO searches were completed which showed that Aviva provided EL cover to the employing company from October 1975 to June 1979 and Generali (the defendant) provided EL cover from April 1981 to March 1983.  RSA sought contributions from Aviva and Generali and the proposed apportionment, based on Fairchild, was RSA 8%; Aviva 60%; Generali 32%.  Aviva agreed to contribute to the claim on the terms proposed.   Generali refused to contribute to the claim for contribution based on s.10 Civil Liabilities (Contribution) Act 1978, which provides a 2 year limitation period for contribution claims as this was an equitable claim under s.1 of the 1978 Act.  RSA argued that the claim was effectively for a debt and that the usual 6 year limitation period ought to apply.

HHJ Rawlinson, considering the case of IEG v Zurich, found that the contribution claim was one that sounded in damages rather than debt and therefore would be covered by s.1 of the 1978 Act and accordingly the limitation period set out in s.10 of the 1978 Act applied.

Comment:  Where a claim is settled on a 100% basis by a traced insurer, it has 2 years from the date of settlement to bring a claim for contribution against another insurer or defendant under the 1978 Act.  The date of settlement for the purposes of bringing a contribution will be date that the damages are agreed rather than the date they are paid.  For those dealing with such claims, early ELTO searches should be undertaken to identify any potential contributors and early steps should be taken to secure their involvement in the claim.

David Williams' note on the case of Stewart v Lewisham and Greenwich NHS Trust  provides some useful guidance on whether the failure to produce a risk assessment gives rise to an automatic breach of duty.  On appeal the court found that the lifting of an oxygen tank, weighing 7.5 to 8 kg, by a midwife, was within the HSE guidance for safe lifting.  As such the task of lifting the tank did not present a foreseeable risk of injury and a detailed risk assessment need not  have been completed.  The accident occurred in this case prior to the coming into force of the Enterprise and Regulatory Reform Act, but the guidance provided remains valid for accidents or injuries sustained following the coming into force of the Act.

In the context of disease claims notwithstanding the weight of the item being lifted, an employer still needs to consider the factors set out in Schedule 1 of the Manual Handling Operations Regulations 1992 (MHO Regulations) and whether there are repeated or strenuous actions required. The absence of a risk assessment will not be conclusive of breach of duty but clearly from a claims defensibility point of view, if a risk assessment is completed which is cognisant of the specific risks and the control measures to be applied, the better the chances of successfully defending the claim.

The MHO Regulations require that the need for manual handling operations be avoided, or where this is not possible to reduce the risk to the lowest possible level (Reg 4).  Provision of mechanical aids such as pump trucks has long been accepted as a way of minimising risk.  In a new development it was reported by the BBC that the carmaker Ford was introducing "exosuits" to a number of its employees in various factories around the globe.  The exosuits are worn around the upper body and assist the employee with lifting or reaching overhead.  The suits have not been trialled in the UK as yet but it shows that employers can and should be seeking to rely on technology to reduce the risk of harm to employees.  Whether the use of exosuits or similar becomes more widespread in industry has yet to be seen.

The decision in Cartwright v Venduct Engineering Limited was considered by David Williams and James Tallant in their post of 18 July 2018.  In this NIHL claim, the claimant proceeded against several defendants against a number of whom the claim was discontinued.  Where claims are pursued against multiple defendants to trial, and damages are paid by one or more defendants but not by others, this judgment will enable the defendants against whom the claim has failed to recover their costs from the damages paid by the others. However, recovery is limited to circumstances in which the damages are paid pursuant to a court order. Where cases are compromised without an order or by use of a Tomlin, order recovery is not permitted.

In the case of Nicholls v Osram Limited and Lamp Metals Ltd (unreported) the judge found that a hearing loss of 3.3 dB, based on the Pass 2 calculations, did not make the claimant appreciably worse off and the hearing loss was therefore considered as de minimis.  This advances the position, modestly, from Holloway v Tyne Thames Technology Ltd where a hearing loss of 3 dB was found to be de minimis.