The long history (made short) of women lawyers

That of women in the advocacy is a path still all in the making, which pays the price of centuries of cultural backwardness.

Yet in many ways the woman is no stranger to the world of law. Indeed, it was an integral part of it, such as to be even the symbol: Themes, wife of Zeus, symbolized the order and the right; his daughter Dike, symbolized the Justice, the fundamental principle behind civil society.

Nevertheless, in ancient Rome the fact that the profession of lawyer was exercisable only by men and not by women seemed to the Romans simply obvious. For this reason, there was no specific law prohibiting women from practicing the forensic profession.

It is said that the first woman in the history to practice the advocacy was Hortensia, daughter of the famous Roman consul and advocate Quintus Hortensius Hortalus. She is best known for giving a speech in front of the members of the Second Triumvirate in 42 B.C.

When the triumvirs imposed to fourteen hundred wealthy women to participate in military expenditure, the women instructed Hortensia to plead their cause and she did so well that the tax was cancelled. After that, however, a praetorian edict was promulgated with which women were prohibited from postulate Pro aliis (to represent others in court). In this way the phenomenon of women advocacy didn't have any follow up in the history of Roman law. 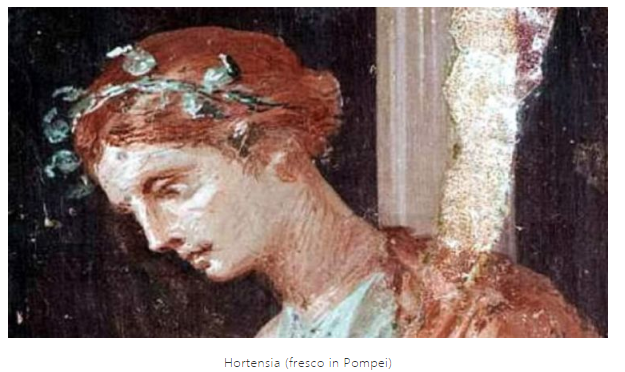 Even if the presence of women in the world of law has distant roots (Giustina Rocca, lawyer of the Forum of Trani – Italy, has gone to history as the first female lawyer in the world, in 1500), we have to wait the end of 1800s to see more women actually working as lawyer. Even though some women studied and graduated with a degree in law, they were prohibited from legal practice by state laws that denied women license to the "learned professions".

In every major European country, in fact, such as in Holland, France, the Scandinavian countries, and a handful of Swiss cantons, women did gain access to at least some fields of legal practice around the turn of the XX century. Yet in the United Kingdom, Belgium, Germany, Italy, the Iberian countries, and the successor states to the Russian and Austro-Hungarian empires, they did not win admission to the bar until after World War I.

In Austria, women could not even matriculate in the legal faculties of the universities until 1919; in Hungary, they could not become attorneys until after World War II.

Court decisions rejecting admission of women to the bar relied primarily on legislative intent and precedent. Even the court decisions, however, often revealed that much more than precedent was at stake the masculine exclusivity of judicial system. That is clear in the case of Lidia Poët, the first European woman who received a degree in Law (1881). She then underwent the theoretical and practical examination of the Order of Advocates of Turin and, approved by 45 of 50 votes, was inscribed in the roll of advocates in 1883.

However, the inscription of a woman on the roll "did not please" the office of the attorney general, who entered a complaint with the Court of Appeal.

The Turin Court of Appeals, in rejecting Lidia Poët's bid to join the Order of Barristers, used the so-called Imbecillitas sexus, arguing that pleading in court would be "contrary to the reserve and modesty appropriate to her sex." Women should not enter the "forensic arena" where they might have to deal with "questions that the rules of polite society prohibit from being discussed in the presence of respectable women." The judges also noted "the risk to the seriousness of the proceedings if one sees the 'toga' covering the strange and bizarre outfits that fashion often imposes on women, and hairdos no less bizarre" under the wigs of female attorneys. In addition, they expressed concern about "the very grave danger to which judges will be exposed of becoming objects of suspicion and calumny every time that the scales of justice tilt in favor of the party for whom a lovely woman lawyer has pleaded."

It is clear that no single factor, or simple combination of factors, comes close to explaining the timing of the opening of the legal profession to women in the various Countries. What is most remarkable is the relative simultaneity of the process in Countries with widely different economic, social, political, religious, and professional traditions. In the first quarter of 1900, women gained access to the bar in almost all the world. 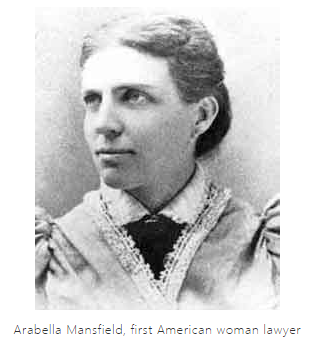 The first woman lawyer in the modern era was the American Arabella Mansfield. Despite an Iowa state law restricted the bar exam to males, Arabella Mansfield had taken it and earned high scores. Shortly after her court challenge, Iowa amended its licensing statute and became the first State to accept women and minorities into its bar. Mansfield became the first female lawyer in the United States in 1869, admitted to the Iowa bar. Nevertheless, Mansfield did not practice law, concentrating on college teaching and activist work.

In China, the first woman to become a lawyer was Zhèng Yùxiù, also known as Madame Wei Tao-ming (married name), Soumay Tcheng or Soumé Tcheng. She moved to Paris in 1914 where she received her doctorate in Law from University of Paris in 1926, and returned to China. She and her husband established a law practice in Shanghai, where she became a judge in a French Concession court. 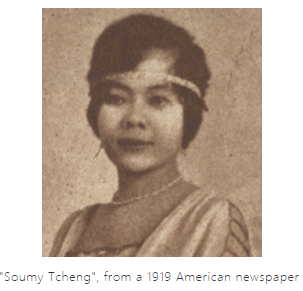 She advocated women having their own voices and choices in marriage, and wrote it into the Republic of China's law. Her autobiography, My Revolutionary Years (1944), published while her husband was Ambassador to the United States, is first-hand accounts of modern Chinese history and has been translated into many languages.

There are many women who choose the tortuous path of the free forensic profession and there are so many in the rooms of justice. However, the women's road in advocacy is still long to go. There are still few women called to carry out managerial offices, those who manage to overcome the stage of the practicum without abandoning their own path, those elected counsellor of professional orders and members of organisms almost closed to females. The legal profession has been and continues to be defined by male norms. Genuine change will come only with radical reconstitution of accepted social norms.

However, some excellent examples of successful women show that in spite of the difficulties and the evident disparity compared to the males, prepared and determined women can reach high positions in the forensic profession. 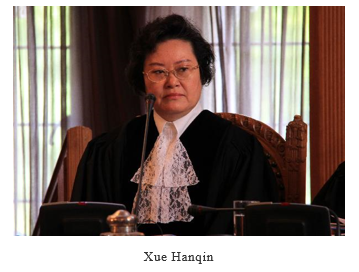 One of the most important lawyers in the world is now a Chinese woman. Xue Hanqin (born in 1955 in Shanghai) is a Chinese judge at the International Court of Justice. She is one of three female judges serving on the ICJ and one of only four women elected as members of the Court to date. Xue is the fifth Chinese judge at the ICJ, and the third representing the People's Republic of China. In 2012, Xue was appointed as Vice President of the International Court of Justice.

As in many other professional fields, women's participation at the highest levels of the lawyer career is important in shattering stereotypes and modeling possibilities for both current and future generations.