After a couple of well publicised losses (see 'related articles', right) McDonald’s finally score a victory, this time before the General Court. The case highlights however some surprising comments made by the General Court in terms of the comparison of marks regarding their similarity. 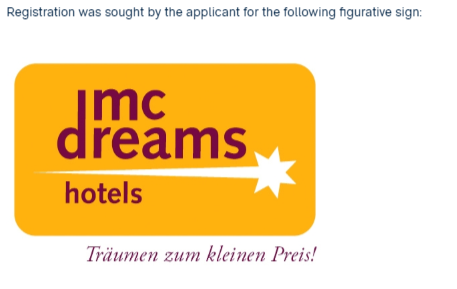 The services claimed were ‘Providing temporary accommodation’. After the mark was published McDonald’s filed a notice of opposition alleging a likelihood of confusion and also dilution under Articles 8(1)(b) and Article 8(5) of the EUTM Regulation.

The opposition was based on sixteen European Union trade marks (EUTMs) including the word marks McDONALD’S, Mc and BIG MAC along with the well-known German trade mark McDONALD’S, for goods in classes 29, 30 and 32 and for restaurant services in (old) class 42. McDonalds claimed a reputation for all of the goods and services covered by their marks in these classes.

No reputation or use was claimed for the provision of accommodation.

Services rendered or associated with operating and franchising restaurants and other establishments or facilities engaged in providing food and drink prepared for consumption and for drive-through facilities; preparation and provision of carry-out food.

It concluded that the relevant public would not make a mental connection between the earlier sign ‘McDONALD’S’ and the contested sign, that is to say, establish a ‘link’ between them.

Considering the global assessment the Opposition Division found that the strong differences between the marks, in particular the different overall impressions conveyed by them, counterbalanced the similarities found between them and the similarity to a low degree of the services and would prevail over the enhanced degree of distinctiveness of the earlier mark.

McDonald’s appealed and in April 2018 the Board of Appeal (BoA) upheld the appeal and annulled the Opposition Division’s decision. It agreed there was no likelihood of confusion but found that the conditions for Article 8 (5) had been met. It held that as the most dominant and distinctive element of the mark applied for was “mc dreams” it “fitted very well” in the opponent’s family of marks. The BoA concluded that an unfair advantage would be taken by the registration of this.

The applicant appealed to the General Court (GC).

The GC in comparing the marks somewhat surprisingly stated: “it is appropriate to take into account the fact that the phrases ‘dreams’ and ‘donald’s’ begin and end with the same consonants, ‘d’ and ‘s’”. From this they concluded there was a similarity between the marks albeit a low one, reinforced by the existence of the opponent’s family of marks.

The GC then asserted that “there is, at the very least, a significant degree of closeness between [the two sets of] services within the meaning of the case-law” including the case of MACCOFFEE, T-518/13.

The court then turned to the question of the link, and confirmed the BoA’s conclusion that the reputation of the earlier mark was exceptional and from this, an unfair advantage was being taken. Having found in McDonald’s favour on those points it was unsurprising for the GC to go on and say, following the case of Specsavers C-252/12, “the mark applied for uses a combination of colours which is similar, although not identical, to that most frequently used by” the opponent, which assists reinforcing the finding that the use without due cause of the mark applied for would take unfair advantage of the repute of the earlier trade mark.

Feeling a need to reinforce their decision they felt compelled to say: …with “the sentence ‘träumen zum kleinen preis !’ (‘sweet dreams at low prices’), such a notion would not be far removed from the idea of low-cost meals that can be conveyed by the mark McDONALD’S”.

Did Ronald just get lucky? At the time of writing a further appeal to the CJEU is possible. To us, the position adopted by the Opposition Division was not unreasonable. The question raised in the Black Label case (reported on page 02 of this newsletter) looking at the global assessment is one where some clarity from the CJEU would be welcome.