This is the third edition of the Eversheds Sutherland SALT Scoreboard for 2020. Since 2016, we have tallied the results of what we deem to be significant taxpayer wins and losses and analyzed those results. This edition of the SALT Scoreboard includes a discussion of the Massachusetts Appeals Court’s decision applying the Internet Tax Freedom Act’s screening software requirement, insights regarding sales tax sourcing and a spotlight on California cases. 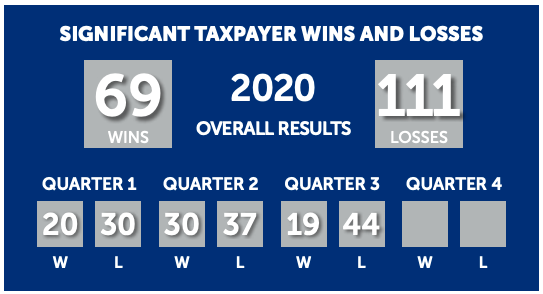 SUMMARY: The New York Supreme Court – a trial court – held that there was no rational basis for the state to impose New York sales tax on storage services performed in New Jersey. An operator of New Jersey corporate records storage facilities offered a service through which it would pick up its customers’ records from their business locations and transport them to the company’s New Jersey storage facilities. The court concluded that while the initial sale/pick-up of records from a New York customer were subject to tax, the subsequent charges for New Jersey storage were not taxable. View more information.

SUMMARY: The Nebraska Supreme Court held that a telecommunications construction company was liable for sales tax on: (1) its purchases of construction materials to build telecommunications infrastructure; and (2) its subsequent charges to install and build the infrastructure. Nebraska law requires a construction contractor to elect to be treated as a “consumer” or “retailer” with respect to building material purchases. Here, the taxpayer elected to be the consumer, making it liable for sales tax on its purchases. Nebraska also imposes sales tax on “any person involved in the connecting and installing of [telecommunication] services.” The court rejected the taxpayer’s argument that it was subject to double taxation, finding the scenario involved two different activities subject to tax. Rather, double taxation occurs when “both taxes are of the same kind and have been imposed by the same taxing entity, for the same taxing period, for the same taxing purpose, and upon the same property or the same activity, incident, or subject matter.” Here, rather, the taxpayer was the consumer of the construction materials and seller of the construction services. View more information.

SUMMARY: The Washington Supreme Court held that the business & occupation tax deduction for hospitals on compensation for health care services subsidized under certain government-funded programs is limited to payments received from Washington and federal programs. Therefore, payments by other states’ programs to Washington hospitals are included in the business & occupation tax base. The Washington hospitals claimed that their receipt of payments from other states’ medical programs qualified for the deduction. But the Court held that the statute “unambiguously” does not allow payments from other states to qualify for the deduction. The court also dismissed the taxpayers’ Commerce Clause argument. The court held that disparate treatment between in-state and out-of-state interests is tolerated if the challenged provision: (1) benefits the exercise of a government function; and (2) treats private interests the same. View more information.

SUMMARY: A California Court of Appeal found that where a taxpayer did not file proper notice with the California Board of Equalization, the limitation on retroactive “escape assessments” did not apply. Shortly after a merger, the taxpayer filed a Delaware certificate of merger, but failed to file the change in ownership statement in California until seven years later. County assessors may reassess property when there is a triggering event. When there is a delay between the event and its discovery by the assessor, the assessor may levy retroactive “escape assessments” to collect any underpayment for the intervening years. California’s typical four-year escape assessment limitation does not apply if the taxpayer fails to file a change in ownership statement. Here, the court rejected the taxpayer’s argument that the filing of a certificate of merger satisfied the requirement to file a change in ownership statement and held that without strict compliance with the statutory notice requirement, the four-year limitation on escape assessments did not apply. View more information.

SUMMARY: The California Office of Tax Appeals held that a foreign LLC was subject to the state’s $800 LLC tax because it held a 0.7830849% ownership interest in an LLC that owned property in San Diego. In addition to a more traditional nexus test based on an entity’s business activities in the state, California imposes a bright-line nexus test tied to threshold sales, property, and payroll amounts. In particular, a corporate entity is considered to be doing business in California if its real and tangible personal property in California exceeds the lesser of $50,000 – adjusted for inflation – or 25% of its total real and tangible personal property. In making this determination, California takes into account the entity’s pro rata share of California property owned by pass-through entities in which it holds an interest. The OTA concluded that because the foreign LLC’s pro rata share of the California LLC’s property – valued at over $60 million – exceeded this threshold, the foreign LLC had nexus for purposes of the $800 LLC tax. The OTA also concluded that the bright-line tests do not distinguish between active versus passive ownership interests, or general versus limited partnerships. View more information.

SUMMARY: A California Court of Appeal held that California income tax applies to the entire amount of trust income derived from California sources, even if the trust is managed in part by a non-resident trustee. The taxpayer argued that its capital gain on a sale of stock should be sourced to California based on the proportion of its trustees that were resident in California, without regard to the source of the income. The court disagreed, concluding that a trust’s taxable income must be calculated in the same way as if the trust were an individual. Thus, the taxability of gross income depends on the residence of the taxpayer or fiduciary only when the income is derived from a source outside of California. View more information.