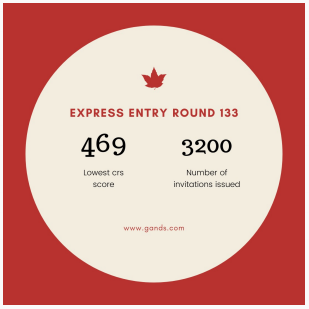 Today, the Department of Immigration, Refugees and Citizenship Canada (IRCC) invited 3,200 applicants with a Comprehensive Ranking System (CRS) score of 472 or higher to apply for permanent residence.

Last year, the Government of Canada issued a record-breaking 89,800 ITAs which is the largest number issued since the Express Entry system began. With less than 2 weeks left in the year, this record looks like it won't be broken. Today's draw brings IRCC to within 4,500 ITAs to match last year's target.

Today’s draw also marks the 133rd round of invitations since Express Entry came into force and with that, IRCC has applied its tie-breaking rule with the timestamp of December 19, 2019 at 13:21:53 UTC. This simply means that all candidates with a CRS score of 469 or above, and previous candidates with a score of 469 or above who entered their profile in the Express Entry pool before the selected tie-breaking date and time will receive an invitation in this round.