Does Adidas lose its Three Stripes？

A ruling made by the General Court of the European Union on June 19, 2019 upheld a decision by EU Intellectual Property authorities that three-stripes trademark owned by German sportswear giant was annulled due to "devoid of any distinctive character".

The three stripes trademark at issue: (hereafter "mark a tissue")

"The mark is not a pattern mark composed of a series of regularly repetitive elements, but an ordinary figurative mark," said by Court.

Does Adidas lose its Three Stripes？

A spokesperson from Adidas said "This ruling is limited to this particular execution of the trademark and does not impact on the broad scope of protection that Adidas has on its well-known three stripe mark in various forms in Europe".

Even if some news circulated emphasize that this decision represents a big loss for Adidas, but above statement seems more plausible.

Actually, Adidas Group has three main sub-brands under their different series (see below picture). Excluding the mark at issue which has been declared invalid in EU, Adidas still owns various valid trademark registrations designed with different three stripes under their brand.

The current invalid decision is more like a yellow-card warning for Adidas, but it wouldn't arouse great influence or lost in a short time. 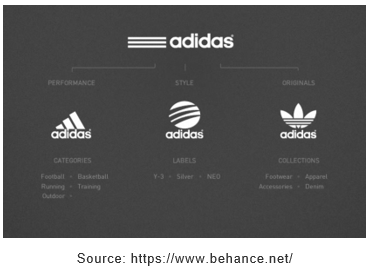 Background to the dispute

In 2014, EUIPO approved the trademark registration for "lll" (three stripes trademark at issue), in favor of Adidas, on "clothing, footwear and headgear" in class 25.

In the application for registration, Adidas had identified the mark as a figurative mark and corresponds to the description with "The mark consists of three parallel equidistant stripes of identical width, applied on the product in any direction."

In 2016, following the invalidation filed by Shoe Branding Europe BVBA, a Belgian-based company, EUIPO annulled the mark at issue because of lacking any distinctive character, both inherent and acquired through use. In accordance with EUIPO, the mark at issue should not have been registered.

Especially, Adidas failed to establish the evidence that the mark had acquired distinctive character through use throughout the EU.

The judgment issued by the General Court upholds the preliminary invalidation decision made by EUIPO, dismissing the request of Adidas again.

Highlighted arguments in the disputation

i. Misinterpretation of the mark

Adidas sought to argue that the mark at issue is a pattern mark whose proportions are not fixed, being able to extend to every dimension, rather than a figurative mark as it had been registered.

The court highlighted that a figurative trademark could be considered as a pattern mark only when it consisted of a set of elements that were repeated regularly.

Apparently, the mark at issue had no relations to the requirement of being a pattern mark, but only a figurative mark as described when filing.

In other words, the mark at issue should be used in the way it was registered. The length and angle of the stripes could not be modified.

ii. The law of permissible variations

Adidas also argued that a large body of evidence showing different forms of use of the mark at issue should also be taken into consideration instead of being dismissed.

As a result, those forms of use have acquired distinctive character.

The court agreed with the arguments of the Board of Appeal to dispute:

(i) where a trade mark is extremely simple, even a slight difference could lead to a significant alteration to the characteristics of the mark as it had been registered;

(ii) use of the mark at issue in the form where the color scheme is reversed necessarily alters the distinctive character of that mark;

(iii) some of the evidence showed a sign with two instead of three stripes and;

(iv) the use of sloping stripes altered the distinctive character of that mark. 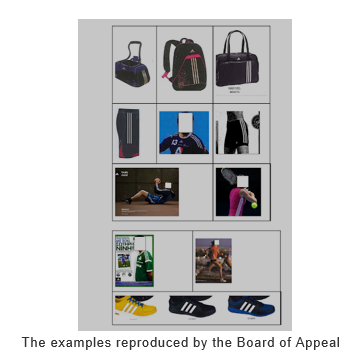 The examples reproduced by the Board of Appeal

As we can see, most of evidence provided by Adidas differ from the mark at issue in its registered form due to the different thickness, length or being cut at a slanted angle.

The difference constitutes significant changes, so Adidas's argument shall be rejected in its entirety.

iii. Acquired distinctive character through use -- relevance of use evidence

Adidas claimed that the mark at issue had acquired distinctive character through a huge amount of use evidence.

The court regards most evidences, more than 12,000 images, provided by Adidas are irrelevant. As what saying above in point ii, the form of use differs from the mark at issue itself.

In addition, Adidas had not proved that the mark at issue had been used throughout the whole territory of EU. The only evidence which is, to some extent, relevant relates to only 5 Member States out of 28.

Therefore, it cannot be extrapolated to the entire territory of the EU and prove the market issue has acquired distinctiveness among the whole EU consumers.

In the light of above, Adidas shall learn a lesson from this loss, even not big, paying more attention on maintaining trademark use evidence and being more organized on marketing strategy when designing trademarks.

A fall into the pit, a gain in your wit! The validity of use evidence should always be paid more concerns.

If the case happens in China? Effective use evidence of trademark in China.

Our clients often enquire us: what kind of use evidence of trademark would be identified as validity by Chinese trademark office? The Adidas case in EU initiate a similar issue in China.

Actually, the evidence provided by Adidas, even in China, would not be recognized as genuine use as since most evidence show the trademark has been modified from its registered form and only limit to few territories and different designated goods.

The evidence of use of trademark must be related to the mark itself for sure and must be formally acquired of being abundant in China.

In accordance with article 48 of Chinese trademark law: The use of trademarks herein refers to such activities as using trademarks on goods, goods packaging or containers and goods transaction documents, or using trademarks in advertising, exhibits and other commercial events so as to identify the sources thereof.

The evidence of use in the sense of trademark law is a Quartet, trademark + period + goods/services + territory, and none of them is dispensable.

In other words, the evidence provided should reflect what trademark was used on what goods at what time only in mainland China.

Generally speaking, the examination of use evidence of trademarking China are similar to EU. Nevertheless, it would be stricter on the form of use in China.

Some sample photos of product bearing the mark are far from sufficiency. Sample photo, fapiao (invoice), advertising documents, public publications, and printing materials at exhibitions, all of them should be taken into consideration to constitute "evidence chain" to prove the genuine use of trademark instead of symbolic use.

The case of Adidas has given us a lot of inspiration.

Firstly, enterprise should contemplate the use of trademarks when designing. Extremely simple design of trademark will bear the risk of losing its function of distinguishing the source of goods and services.

Secondly, all of the trademark offices in various countries have fairly strict regulations on the use of trademark, i.e. the use shall abide the form as registered without arbitrary modification, otherwise it will cause unnecessary losses in possible disputed cases.

At last, let's back to the Adidas case, the decision issued by the General Court of the European Union can still be appealed at the European Court of Justice, the EU's top court.

However, Adidas only has two months to do so. We will see what happens.