Cannabis has enjoyed quite the renaissance over the past six years. Since the people of Colorado and Washington voted to legalize cannabis for adult use in 2012, seven additional states and Washington D.C. have followed suit. Thirty-one states currently allow medical marijuana. All but four states allow for hemp-derived CBD in some form. In the November 2018 election, two more states are voting on whether to legalize for adult use while another two states will vote on whether to legalize for medical use. Additionally, several state legislatures are working on legislation that would legalize cannabis without the need for a ballot measure. As of October 17th, Canada became the first G7 nation to legalize cannabis at the national level. Even the U.N. is calling for a critical review of cannabis’ scheduling in international drug treaties. There is a sea change happening, regardless of our federal government’s antiquated and unpopular position on cannabis.

The history of cannabis prohibition and the classification of cannabis, in 1971, as a Controlled Substances Act Schedule I narcotic are well documented. At that time, after a decades-long campaign by the federal government against cannabis, national support for legalization hovered right around 14%.

Today, however, support for cannabis legalization is at an all-time high. According to the most recent Gallup poll, published October 2018, two in three Americans now support legalization. Since 1969, Gallup has polled a wide cross-section of Americans on cannabis legalization. From the early 1970’s until around 1996, support for legalization leveled off at just above 20%. In 1996, when California became the first state to legalize marijuana for medical purposes, support for legalization increased to above 25% and has been on a near-steady rise since then. In 2012, when Colorado and Washington became the first states to legalize marijuana for recreational use, national support had nearly doubled to just under 50%. Impressively, that support has grown to 66% in just six years, with 2018 being the third year in a row to see annual increases in support at 2% or more. 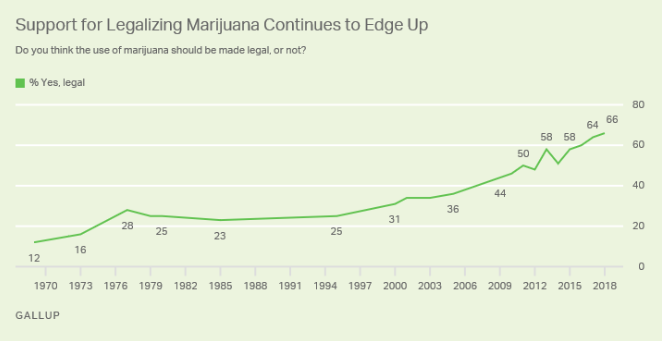 In addition to showing broad spectrum support, the recent Gallup poll breaks down support by certain demographics. Two statistics of note are as follows:

These statistics demonstrate the way Americans’ views of cannabis have shifted dramatically over the past several decades. Indeed the flood gates of support for cannabis are opening at the state level, creating a call for change in cannabis law and policy at the federal level.

Cannabis banking in the US