John Boudreau, professor and research director at the University of Southern California’s Marshall School of Business and Centre for Effective Organisations, recently stated in his book Effective human resource management: A global analysis, that HR professionals today spend no more time than they did in 1995 being strategic. In the current climate, the ability of HR directors to add strategic value in organisations is critical. So, what is holding HR back, from becoming the strategic function it needs to be?

“You only have to look at how so few HRDs ever make it to CEO to understand why,” says Glenn Jones, HR consultant to HSBC and Bank of America, and author of recently published book Human resources changes the world. “HRDs still seem to have a victim-mentality. Despite all the chatter about the need for strategic HR, the problem HRDs face is a systemic one around the function itself,” he adds: “with all the transactional elements of hiring, inducting, training and paying their people, that they simply don’t have the time to add the strategic string to their bow.”

HR is often, unfairly, accused of being fixated with creating ‘compliance’ rather than ‘capability’. “It’s like HR lives in a constant state of déjà vu,” says Jo Taylor, former director of talent and resourcing at TalkTalk Group, and founder of HR consultancy Let’s Talk Talent. “On the one hand HRDs say they want to be more strategic, but on the other, they haven’t changed with the times – they still use the Ulrich model (20-plus years and counting), and they still use the nine-box matrix. Using the same tools but expecting different results won’t work.” 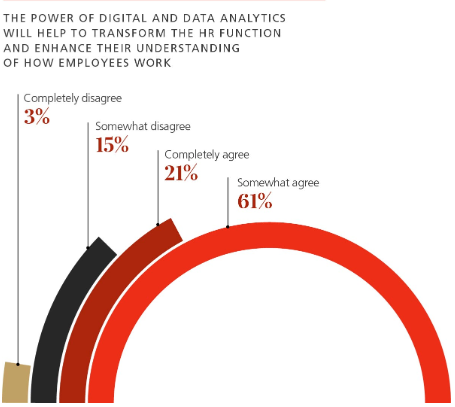 In theory, CEOs should fully support and defend their HRDs. PwC’s annual CEO Report 2018 reveals that alongside the things the boss has absolutely no control over – like terrorism, cyber-attacks and overregulation – the availability of key skills is now a top five worry (rising from 31 per cent of global CEOs polled in 2017 to 38 per cent this year), and something that is very much in their power to change if talent is a board-level conversation. But, as Taylor adds: “For HR to be strategic, it’s as much a task of changing who it reports to as anything else. Report to the CFO (as most HRDs do) and HR will only ever be talked about from an operational perspective. Report to the CEO and HR has the chance to make a difference.”

Being ‘strategic’ necessitates being able to come up with a strategy. As Nigel Davies, founder of digital workplace Claromentis says: “Strategic HR is HR with an agenda.” So, could better HR technology be the salvation they have been looking for?

Technology certainly gives the HR function a new vernacular – because just having better HR technology will improve the efficiency of HR itself – which can bring strategic visibility to the HR function. In Ius Laboris’s forces for change research, a staggering 82 per cent of respondents either ‘somewhat’ or ‘completely agreed’ that ‘the power of digital and data analytics will help to transform the HR function and enhance their understanding of how employees work, The Hackett Group’s global 2018 HR Benchmarking Report, also confirms this. It finds better use of technology can accelerate HR departments to ‘world class’ status in less than five years, and for a company with $10 billion in revenue, attaining world-class performance in HR represents as much as $14 million in cost savings annually.

“Technology enables HR to connect with the business,” argues Alex Moyle, author of Business development culture. “If the strategy of a business is to improve sales by X-per cent, it’s technology that has the power to identify who the best hires have been, what skillsets need to be found in further hiring, how psychometrics relate to sales performance, whether specific training received can be linked to faster new business gains. This is the sort of data that CEOs listen to.” According to Moyle, marketing departments have been using data like this for years and have the ear of the CEO not just because the data they present them is rich, but because it allows for faster decision-making.

But perhaps the most immediate issue for HRDs is the sheer proliferation of technology to choose from. As well as large enterprise-wide HR systems/dashboards that can catalogue the skillsets of all staff, and cross reference them against skills gaps for talent planning, recruitment and retention strategies, there are a host of single-play providers with very specific applications. These include a raft of predictive technology providers, including disruptive firms like Good & Co which has created a psychometrics test that works out if job applicants’ thinking style is compatible with the people or the culture of the company they might be working for. Where do HRDs even begin to look?

“Maybe the key is less about what the technology can do, but more what insight it provides,” suggests Will Hamilton, CEO of LauchPad Recruits, provider of AI-enabled recruitment technology. Its technology examines how recruiters manually score interviewees, to ensure fatigue or bias doesn’t set in. It also ensures that people are selected against what ‘excellent’ in a job is supposed to look like (based on how previous hires have performed on-the-job). Insightful data like this, he argues turns HRDs from operators to strategists. “At the moment, the siloed nature of HR means the rest of the business isn’t linking things like what HR does in recruitment with quality of hire further downstream,” he says. “Just compiling recruitment conversion rates or time to hire data won’t move the strategic needle, but more analytical data does. What HRDs need is to take the analytics to the boardroom rather than the technology itself.”

At the moment though, there is some debate about how close HR professionals get to doing the analytics themselves. Devyani Vaishampayan – a former interim global head of HR at Rolls Royce, and ex-regional HRD at G4S – is so convinced HR should know more about the strategic impact of HR technology that she’s set up a venture capitalist company – the HR Tech Partnership – whereby fellow HRDs actually invest in HR technology start-ups. She says: “One firm we’ve invested in can scan a million CVs a day; another is using emotion sensing AI to see how a corporate culture is evolving.” She adds: “The key though with any technology is that it should enable HR to predict change rather than react to it – it’s this predictive element that has the ability to take HR strategy to a whole new level.” She says: “Statistics out there suggest 25 per cent of HRDs are looking at AI, but my suspicion is that it’s lower. What’s really important is that HRDs gain familiarity with technology – because they need to spot the difference between what is hype and what will make a difference.”

“For HR to be strategic, it’s as much a task of changing who it reports to as anything else”

Recently published research by LinkedIn certainly argues the rise of the ‘HR analyst’ is potentially on the cusp, as professionals seek out the technological skills they think will make them shine internally. It reveals there has been a 49 per cent year-on-year rise in people listing HR analytics as a skill on their profile, with 19 per cent of UK businesses adopting HR analytics and 11 per cent creating an actual role in that name. Hamilton argues analytics requires a “very certain skillset” however, and HRDs would be best suited hiring analysts to do the legwork for them, and then interpreting the data they’re given.

But maybe it’s just adaptability that HRDs really need to show. Greg Pryor head of people and performance at Workday, argues HRDs simply need have the analytics at their fingertips to answer the new questions CEOs are asking: “CEOs are realising they need to start thinking bigger,” he says. “As they increasingly turn to HR leaders as strategic guides for a new business world, it’s important they have the answers to three key questions: How can they support their company’s growth initiatives and develop an agile talent strategy that ensures they have the right people in place at the right time?; how can they develop a culture that attracts, engages, and retains the best workforce?; and how can they tackle issues like cultural dilution and performance enablement and get their CEO and board ‘on-board’?”

Undoubtedly, some of these questions are ‘big’, but if technology is used appropriately, experts argue HR can lend new insight. Geoffroy de Lestrange, associate director of product marketing at Cornerstone OnDemand says: “In the face of change, HR must adapt much like finance and marketing did a decade ago.” He adds: “If HR cannot develop a people management strategy that aligns with the business ambition, then it cannot be a legitimate part of the leadership team.”

Anne-Laure Périès of the French Ius Laboris firm, CAPSTAN Avocats, says she strongly believes in the use of innovative technology for HR directors. “As the rest of the board will be making more and more decisions based on data analytics, it’s only natural that HR directors should do the same.” They will have to show their ability to analyse data globally - and it will be crucial for them to be familiar with big data because, from a European perspective at least, they will need to implement the General Data Protection Regulation. “This means HR directors will have to become more familar with the way personal data are colllected, stored and analysed by AI.”

But there is, it feels, hope ahead. A recent (2017) Cornerstone and IDC study found that only a fifth (17 per cent) of HR directors were ‘not’ part of their company’s digital transformation strategy. Hamilton concludes: “The conversation has, I believe, moved on. People understand technology touches us in all areas of our life. HR is now just one of those functions where technology is making an impact. Technology used to support decision-making at a strategic level can only be a good thing.”