Under the new land tax laws passed late last year, landowners’ interests will be aggregated across both joint and individual ownerships. Minority ownership interests in properties will not therefore prevent aggregation as they have done to date. This could cause a significant increase in tax for a landowner who currently holds land in structures that involve minority interests.

Many investors with multiple properties hold those properties jointly. This usually involves one landowner with a majority interest and other landowners with a minority interest. To the extent the minor interests are held by different entities, the properties in such structures will not be aggregated for land tax purposes (subject to the Commissioner forming the view that those minor interests were created to reduce land tax).

Under the new laws, which will come into effect from 1 July 2020, a landowner’s interest in any property they jointly hold will be aggregated with every interest they hold in other properties, whether individually or jointly. Using the above example, Mrs Jones’ 85% interest in each of the three properties will be aggregated in calculating her land tax assessment. This aggregation could result in landowners, like Mrs Jones, paying a significantly larger amount of land tax than they have previously.

The potential increase in land tax for the Jones Family under the new rules is shown in the following table. In this case, there will be an additional $15k of land tax each year for the majority holder, Mrs Jones. 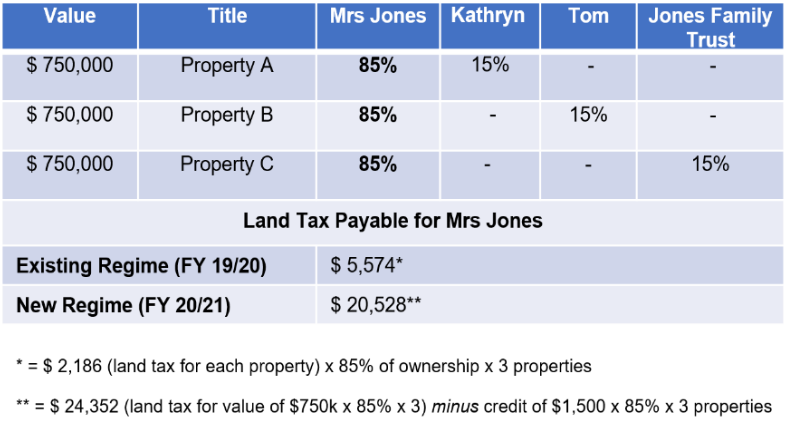 Mrs Jones may be eligible for ex-gratia relief under the Land Tax Transitional Fund for some of the increased tax. However, the relief is only available for 3 years and reduces in the second and third years.

What This Means Moving Forward…

The new laws could result in land held in existing structures with genuine minority interests effectively being aggregated for land tax purposes. This will likely lead to a substantially larger land tax liability for the landowner who holds the majority interest in those structures.

Accordingly, we strongly recommend that landowners who have structures that involve minority interests obtain advice as to the land tax consequences under the new rules. Consideration may then need to be given to restructuring to prevent any significant increases in land tax going forward.