The invention of plastics was considered a boon due to its potential to stop exploitation of plants worldwide, however, soon turned to be a curse due to enormous amount of generated non-biodegradable wastes, which may last as long as 4,000 years. As per a 2021 report published in prakiti.in, nearly 8,300 million tonnes of virgin plastics are produced globally as of 2017, of which merely about 9% could be recycled, about 12% of it incinerated, leaving a whopping 79% to the natural environment including but not limited to landfills, scattered in habitat conditions, polluting the depth of ocean as well as the space. Burning is the easiest and perhaps, the most detrimental way to get rid of plastic as it adds havoc to the air pollution. Dumping in landfills is for the facilitation of the plastics to go back to its fundamental material through decay and erosion by natural causes, which raises a number of issues including wasteful use of priceless land assets in a country of 1.3 billion with a population density of 382/ km2, choking of drain and drainage channels thereof, and overall a land pollution.Not only that, plastic found in field may well block the rainwater percolation underground and thereby block the rainwater absorption, and adds further misery by blocking seed germination. Even the domestic or wild grazing animals die regularly by unconscious consumption of plastic. 3% of the plastics that make way to the water sources puts the life the marine and river fauna in jeopardy and alters the environment available for the aquatic flora, thereby disturbing the eco-system by even altering the plankton population, rendering even species like blue whale endangered. Some reports even suggest that the human population is consuming a hefty amount of microplastics from contaminated water sources; said contamination stays hitherto unknown due to the size and nature of such plastics.

As per NPC India, there are nearly 360 million tonnes of plastics produced globally, with average worldwide utilization of 45 kg per person, out of which a big chunk is only meant for “single use”, something considered most detrimental to the environment, and correspondingly banned in many pockets of India, especially in some cities.Single-use plastic, as the name suggests, are essentially meant for one-time use followed by disposal, said item includes most of the day-to day use polythene bags, sachets, shampoo bottles, disposable glasses, etc. The Government of India (GoI) has issued a list of single-use plastic items that are banned including polystyrene aka thermocol for decoration, candy sticks, plastic flags, earbuds with plastic sticks, plastic straws, spoons, trays, packaging films around sweet boxes, invitation cards etc., where there are viable alternatives like stainless steel/ paper straws, bamboo made stirrers, ear-buds with paper sticks or fluid ear-care products, reusable glasses, cups or cutleries from bagasse or papers, eco-friendly reusable and/ or compostable containers or the likes. This decision was taken as a report from “Down to Earth” suggests that India consumes an estimated 16.5 million tonnes of plastics. FICCI, an industry alliance estimated that 43% of India’s plastics are going as packaging material and mostly constitutes single-use plastics, as much as 80% of the plastic used are discarded.

Seeing the detrimental effect of plastic on environment, India also started to think innovative ways for healthy disposal of plastics, said way includes banning of plastics outrightly with proper replacement, designing microorganism(s) that may metabolize such plastics or using these plastic wastes in some other environment friendly or atleast environment neutral way(s).

However, the steps taken by India is not merely in terms of managing the disposed plastics, but also in terms of putting a permanent halt to the generation of plastics, as Hon’ble Indian Prime Minister gave a clarion call to phase out single use plastic items by 2022. In tune with that, the Ministry of Environment, Forest and Climate Change, GoI notified the Plastic Waste Management Amendment Rules, 2021, which carried forward the spirit of ‘Azadi ka Amrit Mahotsava’, a defining step to curb pollution caused by plastic waste is adopted. India is banning manufacture, import, stocking, distribution, sale and use of identified single use plastic items, which have low utility with a corresponding higher littering potential, all across the country from July 01, 2022.

Coming back to the waste management front, one such way is using these plastic wastes already in the system, is to deploy these in road construction after due processing of the same. In this regard, an Indian inventor, designated as “plastic man” in reverence, Dr. Rajagopalan Vasudevan of Department of Chemistry, Thiagarajar College of Engineering (TEC), Madurai, TN, came up with a ground breaking method of using such plastic waste. His patent application no.: IN 220/CHE/2003, titled “Waste Polymer – Granite blend for block making”, wherein he principally claimed:

“A process of manufacturing the waste polymer – granite building block which is having the following steps:

a. Sorting and cleaning of waste plastics to identify polyethylene, polypropylene and polystyrene and to reject polyvinyl chloride

b. Shredding the film to a size, which passes through 6.75 mm sieve and retains in 2.36 mm sieve

e. Adding the calculated quantity of waste plastics to the hot granite

g. Transferring the mix to the automatic mould followed moulding to a definite size to make it into a block

h. Cooling the block between 10 to 15 minutes only

i. Carrying our finishing.”

Out of sheer act of generosity, Dr. Vasudevan has since made the granted patent free to use for the greater good, and the simple technology is described in the TCE website. His idea included mixing the plastic waste with asphalt mix was not only found useful in India, but also in countries like Australia, Indonesia, United Kingdom and United States.

Dr. Vasudevan further filed Indian Patent Application No.: IN 201721031514 titled “Method For Manufacturing Tiles/ Blocks From Waste Plastics”, which was assigned from TCE to a Pune based private company Hindura Infrastructure Pvt. Ltd., and filed corresponding applications through Patent Co-operation Treaty with the number PCT/IN2018/050574. Further, the same inventor from TCE filed another patent of addition numbered IN 202143001309 based upon earlier filed IN 201721031514, covering the entire methodology of converting plastics to road construction material.

With these developments as well as corresponding concerns for global warming and climate change, in 2015, GoI finally planned a pilot project for using plastic wastes for road building in the National Highways and issued corresponding guidelines for the same. In an amended guideline issued in 2019, the GoI listed the sources of waste plastic vide Table 2, which says: 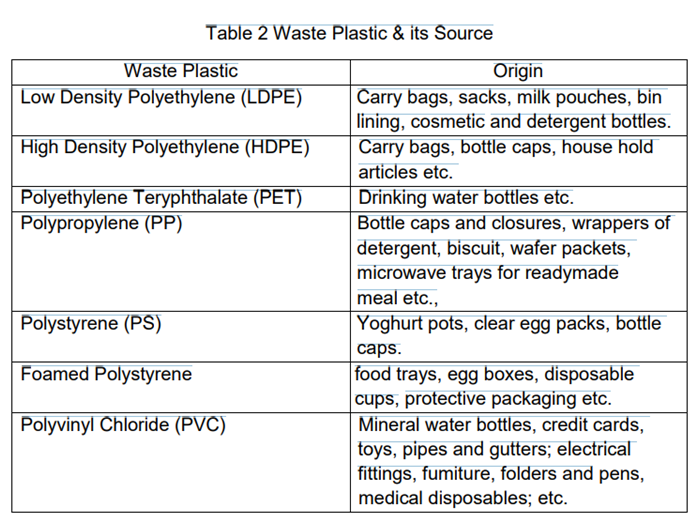 By these guidelines, both dry and wet processes for blending of plastic waste may be done, wherein in dry process, processed waste plastic is added after shredding in hot aggregates whereas in wet process, processed waste plastic in the form of powder is added in hot bitumen. Moreover, plastic waste material may consists only of Low Density Polyethylene (LDPE) or High Density Polyethylene (HDPE), with black colored wastes and PVC discarded, latter is discarded because of releasing lethal levels of dioxins as Dr. Vasudevan suggested. The parameters that must be monitored are the temperature for a limited period of time and the size of plastics or plastic particles. The source of the material, how it would be used must be monitored, while care must be given so that plastics with melting temperature above 180°C are omitted.

Thus, through these successive official guidelines, the process of using plastics for road construction around urban areas gained momentum since 2015. In TN, 11 km and in Kerala, 1 km of the road was constructed using the waste. A positive outcome from the pilot projects in terms of a decrease in overall consumption of bitumen adding to cost-effectiveness, superior longevity of 7- years as against 3- years following usual process, water resistance resulting in less stripping and potholes, increased load withstanding property, no leaching of plastic used and no effect of radiation like UV as well as little or no crack and no melting of the road resulting in minimal maintenance cost as compared to existing methods, inspired the GoI to build 1 lakh km of roads across 11 states including prominent cities such as Pune, Chennai, Surat and Indore, and to double the number in coming years. Till July 2021, 703 km of the National Highways were constructed using waste plastic in wearing coat of flexible pavement. The Ministry of Road Transport & Highways decided that bituminous mix with plastic waste shall be the default mode for periodic renewal of highways falling within the 50 km periphery of an urban area, having population of more than 5 lakhs. Target was set for completing about 300 km length of National Highways using waste plastics in the financial year 2020-21.

A Hindustan Times report says that the plastics replace 6-8% of bitumen from the road construction material, thus, saving money as well as the environment. This fact inspired states as well as local bodies to implement the same mandate in road construction. Plastic has been used for the 270 km stretch of J&K National Highway, Delhi-Meerut Expressway, road connecting Dhaula Kuan to Indira Gandhi (Int.) Airport, New Delhi, India. Bengaluru also successfully constructed more than 2,000 km roads with waste plastic. The Municipal Corporation of Gurugram (MCG) has mandated the use of plastics for arterial roads. The state of Assam also started to use the same. The Rural Road Programme under Pradhan Mantri Gram Sadak Yojana (PMGSY) has already successfully completed more than 13,000 km of rural road made of this material.

Therefore, it has been a matter of pride for India to finally successfully address the problem related to the plastics in dual ways through the intervention of constructive innovation by deploying the wastes to the roadways, as well as through the outright banning of “single use” plastics so that the waste generation may itself be curbed right from the source. In this 21st century, as we have already entered the neo-knowledge economy, innovation driven technologies by fellow Indians, used and patronized even at the government and state level, may catapult the destined rightful journey of India to the apex in every parameters.