On October 10, 2019, the Board of Governors of the Federal Reserve System ("Board") released two final rules to tailor and modify the applicability of enhanced prudential standards for bank holding companies ("BHCs"), savings and loan holding companies that are not substantially engaged in insurance underwriting or commercial activities ("Covered SLHCs"), foreign banking organizations ("FBOs"), and the U.S. intermediate holding companies of FBOs ("IHCs"). One final rule, issued solely by the Board, focuses on the Board's enhanced prudential standards, and the other final rule, to be issued jointly with the Office of the Comptroller of the Currency ("OCC") and Federal Deposit Insurance Corporation ("FDIC"), focuses on interagency standards such as standardized liquidity requirements.

As in the agencies' October 2018 and April 2018 proposals, the final rules subject banking organizations to various enhanced prudential standards based on institution categories that are defined by size and activity thresholds, as follows: 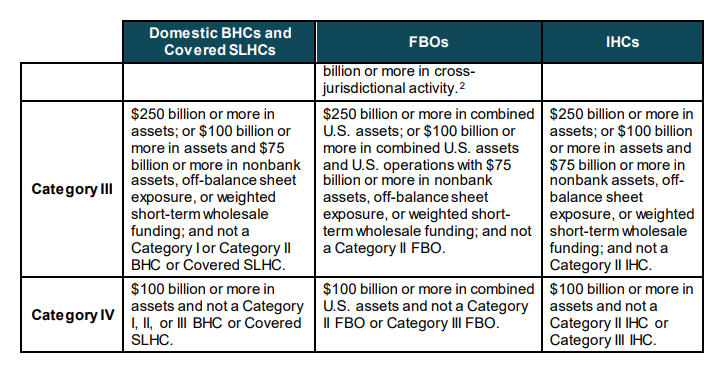 The Appendix to this client alert summarizes the requirements that apply to each category of organization under the final rules.

Compared to the agencies’ proposals, the final rules include the following notable changes:

In addition, the preambles to the final rules suggest that the Board is actively considering several future rulemakings: •

The final rules will be effective 60 days after their publication in the Federal Register. Banking organizations will be required to calculate their initial categories on the effective date of the final rule, based on averages using the most recent FR Y-15 and FR Y-9LP filings.