U.S. Patent No. 10,456,680: Determining play of the game based on gameplay events
Blog Patent Arcade 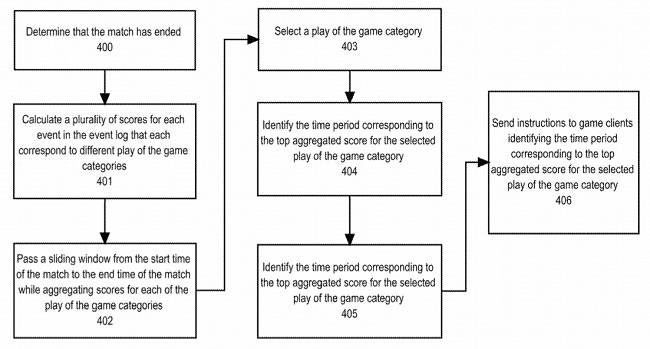 Summary:U.S. Patent No. 10,456,680 (the ’680 Patent) relates to determining the play of the game based on events that occurred in a completed match. The ’680 Patent details a method of scoring a variety of categories of events, such as a “high score” (kills, damage), “lifesaver” (healing, damage blocked), “sharpshooter” (difficulty of a headshot, shot by/on an airborne player), or “shutdown” (preventing another player from using an ultimate skill, etc.) across periods of time throughout the match. In one embodiment, the game server will select the play of the game category with the highest aggregate score, and in another may choose a category that is deemed more exciting to watch, such as the “high score” category. The play of the game is played by each game client and identifies the player who made the play. The play of the game may be either displayed from that player’s perspective, or in a third-person perspective.

Abstract: In an approach, a game server records events that occur within a match of a video game played using a plurality of game clients. After the match has concluded, the game server scores the events according to a plurality of criteria corresponding a plurality of play of the game categories. A sliding window is passed over the events in a number of increments. During each increment, the score for each event that falls within the sliding window is aggregated for each of the categories. The game server then selects a play of the game category and determines the top aggregated score for that category. Once determined, the game server sends one or more instructions to the game clients which causes the game clients to display a replay of the events that occurred during the time window increment corresponding to the top aggregated score for the selected category.