This year has seen a significant number of business failures, particularly on the high street, as businesses have struggled in the face of market fragility and Brexit uncertainty. When a UK portfolio company is underperforming, the presence of a defined benefit pension (DB) plan with a large deficit can be a significant problem. Companies with large pension deficits require contributions that affect cash flow and make exiting more difficult when the time comes to sell.

If a business slips into distressed territory, however, there are mechanisms whereby a company can divest itself of a DB scheme. As companies respond to Brexit and challenging conditions in some sectors, we believe that 2019 will see more of these types of arrangements. In our view, PE deal teams should consider how to respond if portfolio companies are at risk. While the mechanisms can be effective in allowing a company to continue trading (in some form), PE owners should note a number of important factors before deciding to attempt this. 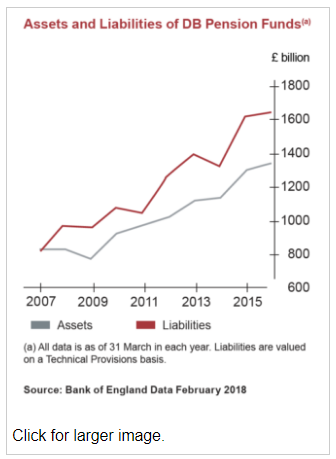 One mechanism for divesting a pension scheme is a Regulated Apportionment Agreement, or RAA. RAAs require consent from the UK Pensions Regulator, while the Pension Protection Fund (PPF) must not object. If an RAA receives approval, pension liabilities can be apportioned to a shell company, which then enters insolvency. The pension plan then enters the PPF, and the company can continue trading. RAAs are rare as they require the approval of pension authorities and deal solely with pension liabilities. Yet we believe that with the right approach, PE firms may be able to pursue this option in a worst-case scenario.

Another mechanism is the Company Voluntary Arrangement, or CVA. Pension authorities tend to prefer a CVA over an RAA as they deal with all stakeholders. A CVA allows a company to avoid liquidation and formal insolvency by reaching a binding agreement with creditors. CVAs need to be approved by 75% of a company’s creditors, and no more than 50% of connected creditors can vote against it if a CVA is to succeed. CVAs have a broader scope than RAAs, as they cover credit arrangements and often include rental arrangements and other business costs. A number of companies, including the retailer House of Fraser and the restaurant chain Jamie’s Italian, have sought CVAs so far this year.

No Quick Fix for Pension Liabilities

In our view, neither RAAs nor CVAs are a quick fix. Both mechanisms require support from stakeholders and regulators, as well as sacrifices from PE owners. The Pensions Regulator and PPF require criteria be met before either mechanism is approved. The company’s insolvency must be deemed “inevitable”, while the outcome for the pension plan must be “significantly better” than if the plan’s sponsoring employer entered insolvency. Consequently, a sizeable contribution to the plan would typically be required. Meanwhile, CVAs and RAAs also result in dilution of a PE firm’s equity stake. Both routes demand an “anti-embarrassment” stake be handed over to the PPF post restructuring — 33% if the current shareholders remain connected to the business, and 10% if an independent third party buys the company.