What are the benefits of the Agreement?

The European Commission states that the agreement will include the removal of 99% of customs duties on exports. Vietnam's tariff elimination schedule for goods imported from the EU will cover a period of 10 years, whereas EU tariffs applicable to Vietnam originating goods will be phased out over a period of 7 years.

The EVFTA will also open up market access for services between the parties. Importantly, Vietnam has committed to phasing out the Economic Needs Test (ENT) applicable to secondary and subsequent retail establishments, five years after entry into force. Accordingly, EU retail investors will enjoy streamlined access to the Vietnam market from 2025.1

Among other things, the EVFTA also includes an intellectual property chapter and liberalisation of public procurement as well as modern transparency, sustainable development and labor provisions.

When will it enter into force

The EVIPA will require Member Ratification Procedures, and will likely enter into force after the EVFTA. The EVIPA also allows for either the EU or Vietnam to propose provisional application of the Agreement.4 In such a situation, only the elements of the EVIPA which fall exclusively under the EU's competences may be provisionally adopted, by agreement between Vietnam and the EU. This would allow some elements of the EVIPA to enter into force at an earlier date.

The European Union - Singapore Free Trade Agreement (EUSFTA) and the EU - Singapore Investment Protection Agreement (EUSIPA) provide a case study on how the EVFTA and EVIPA are likely to proceed. The EUSFTA was the first EU free trade agreement to be divided into a free trade agreement and investment protection agreement, in order to proceed with Member Ratification Procedures. Both agreements have already been ratified by the EU Parliament. The EUSFTA is awaiting entry into force following final administrative procedures, whereas the EUSIPA must be ratified by each EU member state, in addition to the regular ratification process. 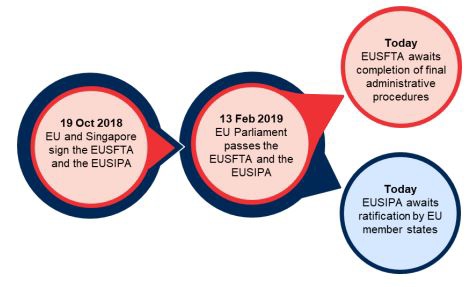