In a referendum held Thursday, June 23, 2016, the citizens of the United Kingdom (the “UK”) voted to leave the European Union (“EU”) in the so-called “Brexit”. Although the European Union Referendum Act, which authorized holding the referendum, is silent as to further steps, last year the European Union (Notification of Withdrawal) Act 2017 authorized the Prime Minister to notify the EU of the UK’s intent to withdraw. The Prime Minister made this notification on March 29, 2017 under Article 50 of the Treaty on European Union, which provides two years for the parties to negotiate a withdrawal agreement, unless the UK and the European Council unanimously decide to extend this period.[1] Further Acts and proposals in the UK have also sought to give effect to the results of the referendum and prepare for the separation of the UK and EU.

One area of concern in the context of Brexit is the UK’s legal framework for privacy and data protection. The UK government has recognized that it will still be part of the EU when the General Data Protection Regulation (the “GDPR”) comes into effect on May 25, 2018.[2] The UK has stated that it will comply with the GDPR, and that its compliance will not be affected by Brexit.[3] To this end, on August 7, 2017, the UK Department of Digital, Culture, Media and Sport (the “DCMS”) published a Statement of Intent, in which it outlined the policy and objectives behind a proposed Data Protection Bill (the “Bill”), which was introduced in Parliament on September 13, 2017 and is currently making its way through both houses.[4]

In the discussion below, we provide the key takeaways from the Bill, the differences between the Bill and the GDPR, the differences between the GDPR and the EU Directive (defined below), and then consider in greater detail the proposals contained in the Bill and how those proposals may affect companies in the UK, EU, United States and elsewhere post-Brexit.

Key Takeaways from the Bill

The suite of proposals contained in the Bill will:

Since the early 1990’s, data privacy has been a significant concern of EU institutions. Personal privacy and data protection are enshrined in human rights treaties to which the EU adheres,[5] and the EU first adopted the European Data Privacy Directive in 1995 (the “1995 Directive”),[6] which was transposed into local law by Member States, including by the Data Protection Act 1998 (“1998 Act”) in the UK.[7]

Migration to and Retention of the GDPR

In April 2016, the EU adopted the GDPR, which will supersede the 1995 Directive and have direct effect in the 28 Member States on May 25, 2018, without the need for national transposition. Since the UK will still be a member of the EU on the date the GDPR enters into effect, the GDPR will become part of UK law. Under the proposed European Union (Withdrawal) Bill (also referred to as the “Great Repeal Bill”), the GDPR would remain UK law after Brexit, but it could be amended in the UK thereafter.[8] Additionally, regarding the processing of personal data for criminal law enforcement purposes, the EU developed the Data Protection Law Enforcement Directive (“DPLED”), which is also scheduled to come into effect in Member States in May 2018.[9] However, given that this latter instrument is an EU Directive, Member States will have leeway in how they transpose the DPLED into national law.

Proposed Measures of the Bill

Rather than completely overhauling the 1998 Act, the Bill, as proposed by the DCMS, subjects most processing of personal data to the GDPR and seeks to enhance and bolster the laws already in place to reflect the changing nature and scope of the digital economy.[10] Some of the differences between the Bill and the GDPR are due to the derogations that exist under the GDPR. Part 2 of the Bill supplements the GDPR and applies a broadly equivalent regime to certain types of processing to which the GDPR does not apply. Some salient aspects of the Bill are discussed below as well as some key differences between the GDPR and its predecessor, the 1995 Directive.

Looking Through the Brexit Lens: What Businesses Need to Know

If the Bill is adopted in its current state, its workability and success will be determined by its performance post-Brexit. Upon the UK’s departure from the EU, it will become a third country for purposes of EU law. As such, a number of instruments will need to be put in place to ensure a continued successful relationship with other polities regarding the transfer and protection of data, including, importantly, the EU and the United States.

With respect to the EU, post-Brexit, the UK will be subject to Article 45 of the GDPR, which stipulates that data transfers will only be permissible if the UK as a third country ensures an adequate level of protection.[46] The EU Commission could adopt an adequacy decision in respect of the UK, as it has done for several countries under the 1995 Directive, and which would ensure an all-encompassing and clear agreement permitting transfers of personal information from the EU to the UK.[47] In order to obtain a finding of adequacy, in essence, the EU Commission examines, most notably, the strength of the legal framework in question, the effectiveness of the domestic regulator and the petitioner’s international commitments to data protection.[48]

However, if the UK is unable to obtain this designation, then in accordance with Article 46 of the GDPR, cross-border data transfers could still take place if the recipient outside of the EU puts appropriate safeguards in place, which include standard contract clauses or binding corporate rules. These alternative measures would involve added costs and red tape for businesses. For purposes of legal certainty and as the strongest guarantee of the free flow of data, an EU Commission adequacy decision would be the preferred approach.

Regarding the United States, post-Brexit, the transfer of data will no longer be governed by either (i) the EU-U.S. Privacy Shield, which established the legal framework pursuant to which transatlantic transfers of data may take place for commercial purposes between the EU and the United States,[49] or (ii) the EU-U.S. Umbrella Agreement, which established a comprehensive high-level data protection framework for EU-U.S. law enforcement cooperation.[50] Consequently, the UK will be at liberty to choose the mechanisms pursuant to which it wishes to proceed with the United States. However, given the general consensus that the UK is unlikely to diverge from the GDPR, the UK would be able to adopt its own equivalence decision with respect to the United States and its own privacy shield. This would mirror the approach taken by Switzerland and recently advocated by the European Union Committee of the UK House of Lords. Not only does Switzerland have an adequacy finding by the Commission, but it also has in place a Privacy Shield Agreement with the United States identical to the EU-U.S. agreement.[51]

Overall, the proposals contained in the Bill must be welcomed as a sign that the UK government is implementing the GDPR and other developments, and it is doing so with an eye toward certainty and an orderly Brexit in the field of data privacy. This is imperative because data privacy and data protection impact not only personal rights, but a significant portion of the digital economy. However, the Bill is still only the first step as a number of gaps remain, such as the UK’s relationship with the United States and the EU.

The introduction of GDPR represents one of the most significant shifts in data privacy standards in several decades. Any organisation that processes EU citizens’ data should assess how the GDPR applies your organisation and implement a plan to prepare for the new law before it goes into effect in May, taking into account also the complexities that are added by Brexit.

Here are 12 steps to take now to prepare for the GDPR, under the UK Information Commissioner’s Office Guidance: 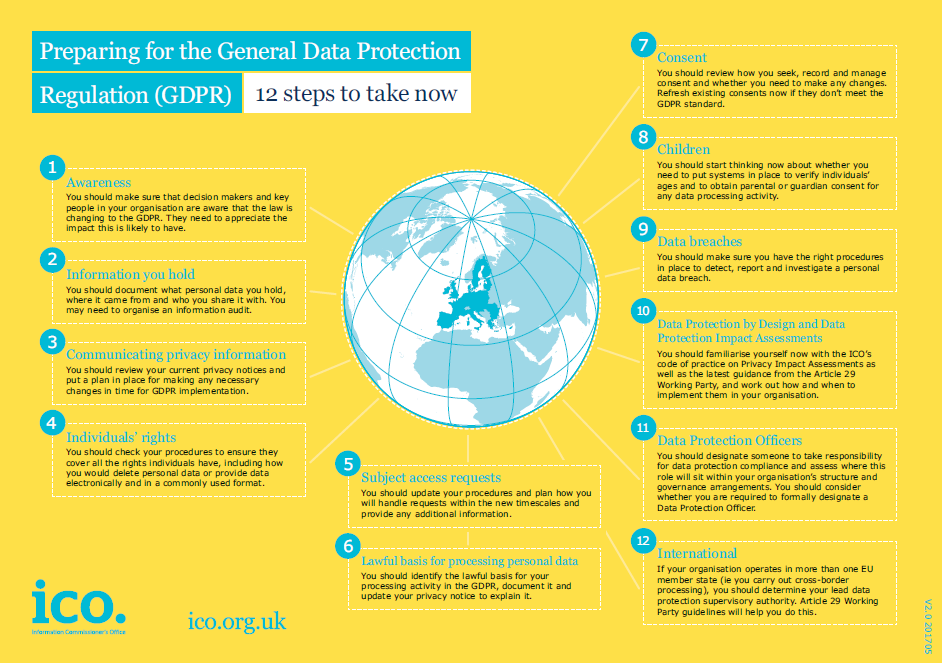 Status of GDPR Implementation in Other EU Member States