The Mongols Nation motorcycle club was recently convicted of violations of the Racketeer Influenced and Corrupt Organization Act (RICO) resulting in a California federal jury ordering the motorcycle club to forfeit its trademarked logo based on links between the image and the criminal activities carried out by the group. The imagine incorporates the motorcycle club’s name along with a Genghis Khan-type character riding a motorcycle. 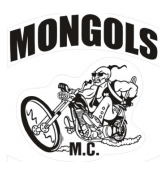 U.S. Atty. Nicola Hanna called the verdict the first of its kind in the nation and said that seizing the Mongols trademarks would serve to “attack the sources of a criminal enterprise’s economic power and influence.”

However, the case is not over. U.S. District Judge David Carter refused to order the trademarks forfeited and instead set a hearing for next month to address, among other things, difficult First Amendment issues raised by the verdict.

In addition to forfeiting legal rights to the logo, the jury also determined that the government could keep certain items of personal property seized during the course of the case which include the Genghis Khan image or the "word mark" consisting of the word "Mongols." This means that the government will hold on to documents as well as certain items of clothing and patches displaying the image, which are typically prized possessions by motorcycle club members.

One unique element of the case is that the defendant in the trial is the motorcycle club itself, not any of the specific members. If prosecutors successfully take possession of the trademark, it likely would set a precedent that could be used against other organizations.

The case is USA v. Mongol Nation, an Unincorporated Association, case number 2:13-cr-00106, in the U.S. District Court for the Central District of California.