If a transaction crosses the HSR Act’s reportability thresholds, parties to the transaction must report it to the FTC and the US Department of Justice (DOJ) prior to consummation.[3]

Pursuant to the updated thresholds, a transaction will be reportable if:

HSR Act reportability thresholds are adjusted annually to reflect changes in the US gross national product (GNP). This year’s threshold adjustments represent an increase of 9.06% over last year’s thresholds.

As previously reported, on December 29, 2023, President Biden signed into law the Merger Filing Fee Modernization Act, which, for the first time in over twenty years updates the structure and amount of filing fees due when submitting an HSR Filing. 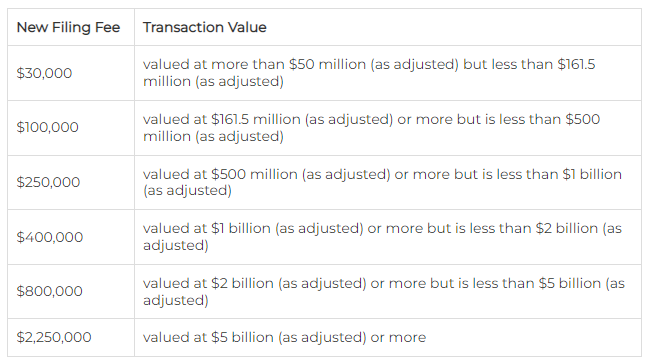 Unlike the prior three-tier structure, the amounts of the six-tiered filing fees will be revised annually based on changes to the Consumer Price Index (CPI), rather than changes to GNP as for the reportability thresholds.

A stated goal of the expanded fee structure is to provide both the FTC and DOJ with more resources to investigate potentially anticompetitive transactions; the Congressional Budget Office has estimated that the increased filing fees could raise an additional $1.4 billion between 2023-2027.

Section 8 of the Clayton Act prohibits interlocking directorates between companies that cross certain thresholds. Similar to the HSR reportability thresholds, the Section 8 enforcement thresholds are adjusted annually based on changes to GNP.

For this year, one person is prohibited from serving as a director or officer of two competing corporations if: