However, the relevant UK and EU laws state that a design may, in fact, be asserted in the appearance of the whole or a part of a product. On this basis, designers therefore have the choice of deliberately disclaiming features of the product to which the design is applied and for which they do not wish to seek protection. In many industries, such as the automotive sector, it has therefore become common for companies to apply for protection for elements of their products that can be removed and replaced, so as to protect against after-market modifications. For example, companies can file registrations directed towards headlight assemblies, bonnets, spoilers or the like, without claiming the entire vehicle in which these features are incorporated.

In addition to registered protection, the UK and EU also offer design protection without prior registration in the form of Supplementary Unregistered Designs (SUD) and Unregistered Community Designs (UCD) respectively. Such unregistered designs provide automatic protection from the day that the design is first made available to the public. However, if the published design is a complex product, up to now it has not been clear whether the protection provided only covers the product as a whole, or whether unregistered protection can subsist in subordinate parts of the overall product. In referral C‑123/20 to the Court of Justice of the European Union (CJEU), the Italian supercar-manufacturer Ferrari found itself asking for clarity on this situation.

On 2nd December 2014 Ferrari published a press release depicting its brand new FXX K track racing car. A key part of the FXX K’s design was the appearance of the front end, which had a deep v-shaped bonnet and a Formula 1 inspired spoiler-shaped bumper. 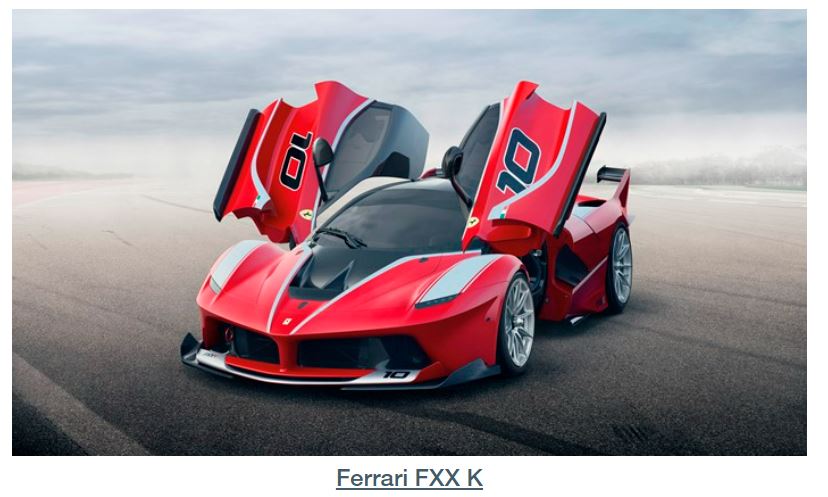 Unfortunately for Ferrari owners, since the FXX K is a racing car, it could not be driven on public roads. Spotting a gap in the market, Masonry Design, a German company specialising in body modifications for supercars, produced a kit for modifying the appearance of the road-legal Ferrari 488 GTB so that it resembled the FXX K. Principally, this involved a new v-shaped bonnet and an F1-style bumper. Masonry Design’s modified Ferrari 488 GTB was unveiled at the International Motor Show in Geneva in March 2016. As this was within three years of the first publication of the FXX K, Ferrari sued Masonry Design for infringement under UCD in the FXX K. 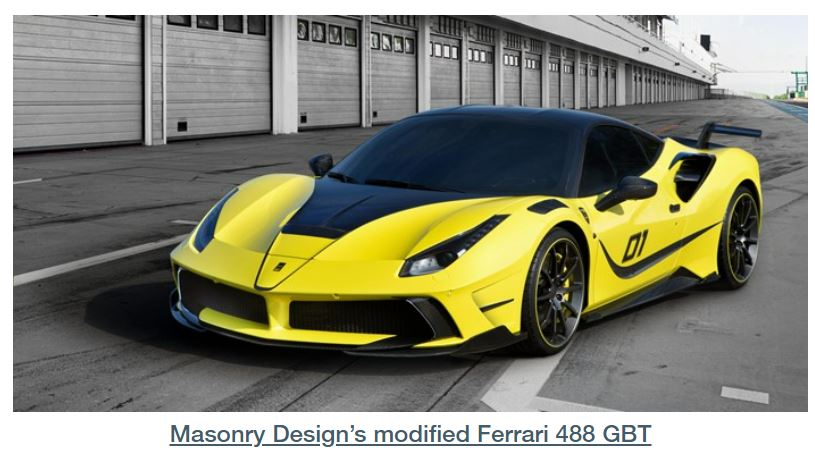 The case was first heard in the Dusseldorf Regional Court, sitting as a Community Design court. Ferrari claimed that UCD existed in the shape of the v-shaped bonnet and the bumper. At first instance, the Dusseldorf Regional Court determined the “design” arising from the publication of the FXX K in 2014 was the design of the entire car. Since the bonnet and the spoiler were not published separately to the FXX K, these could not be considered a separate design. In order to assert rights in only part of this design without a separate publication, the court found that the part in question must have “a certain autonomy and consistency of form”, and that the bonnet and spoiler of the FXX K did not meet this requirement. On appeal, the Dusseldorf Higher Regional Court agreed, and so the case was brought before the Federal Court of Justice, Germany’s highest court.

The German Federal Court of Justice determined that the outcome of the case depends upon the interpretation of the Community Designs Regulation (CDR) 6/2002, and therefore referred two questions to the CJEU. First, the German court asked whether, following publication of an image of an entire product, UCD can be said to exist in only part of that product. Secondly, if this is the case, is there any additional criteria that needs to be applied that the part in question must meet in order for the design to be valid? In particular, the German court asked whether the test of “a certain autonomy and consistency of form” was the correct application of the law.

Responding to the referral, the CJEU found that Unregistered Design Right can indeed subsist in a part of a product following disclosure of an image of the whole, provided that the part in question is clearly identifiable. In other words, the test applied in Germany that the sub-component must be published separately was wrong. Additionally, the CJEU found that there is no separate criteria for selecting part of a design, although the part in question must meet the requirement for protection as a design under the regulation, which is namely that it is defined by features such as lines, contours, colours, shapes and texture. The case will now return to the German court for conclusion.

Will this decision be followed in the UK?

The CJEU’s decision does not have jurisdiction over UK law, and so it is not clear whether the UK courts will follow this judgement. However, the principle of unregistered design protection being applied to part of a design has existed in UK law for a long time, and in fact pre-dates the CDR itself. In particular, there is a body of UK cases, most notably Sealed Air Limited v Sharp Interpack Limited [2013] EWPCC 23, which make clear that UK Design Right (a distinct right to SUD mentioned above) can be applied to part of an article. Outside of the UK, unregistered design rights did not exist in Europe before the CDR, and there is commentary to suggest that the concept of being able to select part of a design rather than the whole was always intended to be part of EU law. Accordingly, many UK practitioners may be unsurprised with the CJEU’s decision, and it would seem highly likely that this principle would be followed in future cases in the UK concerning SUD.

How does this affect designers?

In principle, the CJEU’s decision is good news for designers and innovators. In particular, the decision helps to address the issue of “partial” or “contributory” infringement of a design, making it easier for designers to protect subordinate aspects of their products. This might apply not only to replaceable parts such as in Ferrari’s case, but also to integral features of a product that could be copied and incorporated into another item.

However, the case also highlights the major shortcomings of relying on the very short three year term of protection provided by unregistered designs. Masonry Design’s kit was only launched in March 2016, and Ferrari’s UCD in the FXX K expired on 2nd December 2017. This means that, despite going all the way to the CJEU, Ferrari can only claim for 18 months’ worth of infringement. Registered designs, by contrast, can last for up to 25 years. If Ferrari do have not registered design protection for the FXX K’s bonnet and spoiler, there is nothing to stop Masonry Design continuing to sell the kits at issue. Accordingly, although this looks like a win for designers, it underlines the importance of having a combination of different types of protection, rather than relying solely on unregistered rights.