Since the Alice decision in 2014, patent eligibility under Section 101 has become a serious concern for innovative leaders attempting to build a strong patent portfolio directed to technology that includes software-related or data processing features, such as AR/VR technology. Because of the unpredictability and genuine threat of one’s invention being deemed patent ineligible, the mere association of an invention to software or data processing may scare away potential investors, weaken leverage with potential licensees, and fail to intimidate competitors from infringing. Companies must proactively address potential Section 101 issues through careful and comprehensive patent application drafting that equips them with adequate detail and disclosures that can overcome concerns and provide strong rebuttal arguments.

Companies should understand that they can face 101 challenges at different times throughout the life of a patent. The first hurdle is during review by a patent examiner of a patent application at the USPTO, which includes analyzing whether the claims in the application is directed to a patent ineligible concept (e.g. abstract idea). Once a patent is obtained, its validity can be challenged in judicial tribunal, such as a federal district court or the Patent Trial and Appeal Board, by a third-party through arguments that the patent should be deemed invalid because it is directed to ineligible subject matter. Thus, it is ideal to address any potential 101 issues upfront at the patent drafting stage.

For patent applications relating to software, the immediate confusion after Alice was drastic with a 31% increase in first office action rejections based on Section 101 and 26% increase in the uncertainty in the patent examination process. However, in January 2019, the USPTO provided guidance to address Section 101 issues that reportedly decreased the number of rejections by 25% and the uncertainty by 44% in 2019. While these guidelines are not binding outside of the agency, they are instructive on how a company can approach Section 101 issues in light of Alice.

It is helpful to understand the overall procedural analysis to determine patent eligibility. Patent eligibility is broken down into Step 1 and Step 2. Step 2 is further defined in two parts: Step 2A and Step 2B. Lastly, Step 2A breaks down into two separate prongs: 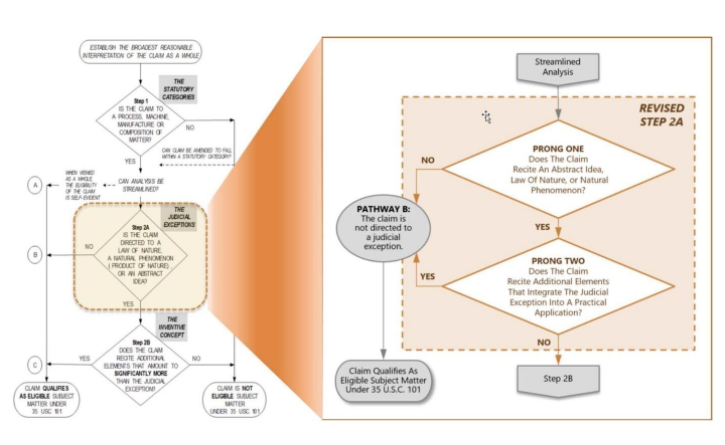 Step 1 merely involves determining whether the claim meets the statutory requirements of Section 101, which requires the claim to be a “process, machine, manufacture, or composition of matter.” Every claim must ft into one of these categories, otherwise, it is not patent eligible.

Step 2 is where the difficulty and confusion arise. First, in Step 2A, it is determined whether the claim is directed toward one of the judicial exceptions: a law of nature, a natural phenomenon, or an abstract idea. Next, in Step 2B, one must show that the claim recites an inventive concept. This article focuses on practical tips to take advantage of Step 2A and avoid Section 101 issues, specifically on how to avoid having claims covering AR/VR concepts being designated abstract.

For prong 1, there are three common categories of abstract ideas that examiners and courts look toward to see whether a claim limitation recites an abstract idea: mathematical concepts, mental processes, or certain methods of organizing human activity. All three of these examples are at the core of AR/VR applications. Mathematical concepts are instrumental in manipulating data and creating AR/VR environments. Many of the applications surrounding AR/VR implement visualizations of the human mind. And, many industries take advantage of AR/VR to perform previously manual activity in a augmented or virtual manner. Thus, it is especially important that that patentees carefully draft claims directed to AR/VR technologies.

Describe in Detail How Extensively Data is Manipulated

To avoid reciting a mental process, the claims cannot include limitations that can be practically performed in the human mind. For instance, in Research Corp. Tech. v. Microsoft, the Federal Circuit found that the claimed method was not a mental process because it was directed toward rendering a halftone image of a digital image by comparing, pixel by pixel, the digital image against a blue noise mask. On the flip side, in Electric Power Grp. V. Alstom, the Court found that the claims recited vague data analysis at a high level of generality such that it could be performed in the human mind. Thus, it is important to capture the complexity any processes described in claim limitations and avoid general data processing that, when broadly read, covers analysis that can be simply done in the human mind.

To further protect claims from Section 101 attacks, patentees should equip themselves with arguments under prong 2 by including additional elements that integrate any alleged abstract idea into a practical application. This requires analyzing limitations individually and as a combination with the rest of the limitations of the claim itself. The key inquiry requires showing a meaningful limitations on the abstract idea so that the claim is not designed to monopolize on the abstract idea. Notably, integration into a practical application can be found even when the elements represent well-understood, routine, conventional elements or activity.

To take advantage of prong 2, a patentee must recite additional limitations that capture and utilize the abstract idea in a meaningful manner. In USPTO Example 45, elements (b) and (c) of claim 1 recited abstract ideas because they described mathematical formulas to determine extent of curing and mental processes that could be performed in the human mind by, for example, a scientist or engineer. Next, under prong two analysis, the other claim limitations (i.e. limitation (a) and “controller”) did not integrate the abstract idea into a practical application. Limitation (a) was recited with a high level of generality and described mere data gathering. Similarly, “controller” generic recitation represents no more than mere instructions to apply limitations (a)-(c). The physical nature of the controller does not transform this additional limitation into a practical application. Contrastingly, claims 2 (dependent on claim 1) and claim 4 add limitation (d) directed toward sending control signals perform corrective actions by instructing the molding apparatus to perform specific functions (opening and ejecting) once a certain temperature is reached, thus preventing technical issues of undercuring or overcuring of the molding. This limitation meaningfully employs information provided by the abstract limitations to control the operation of the apparatus. Moreover, the claimed controller provides technical improvements in the field of injection molding.

The tips described above can help insulate claims from Section 101 issues. In Part II, we dive into Step 2B and explain how patentees can draft claims to recite an inventive concept. This will provide even more arguments against Section 101 attacks.