Israeli M&A heads for another bullish year after record 2018 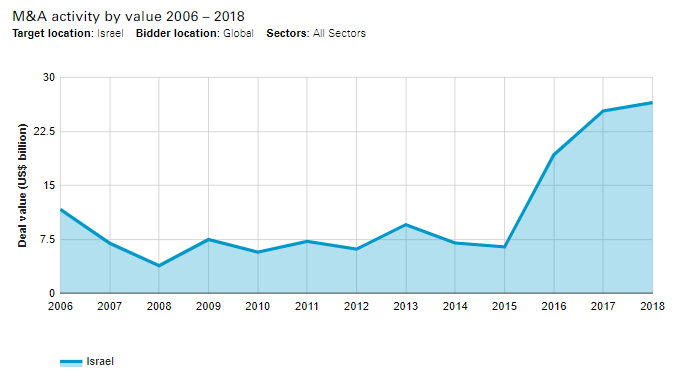 Dealmaking in Israel is on a high. Last year saw value hit new records—deals targeting Israeli companies totaled US$26.5 billion, a 4.5% increase on the previous year.

One of the reasons for the increase was the jump in the value of domestic deal activity in 2018—rising 179% from US$2.9 billion in 2017 to US$8.1 billion last year. Meanwhile, inbound activity held up well with four of the top five deals coming from abroad. The largest transaction of the year, US-based International Flavors & Fragrances (IFF) acquisition of Frutarom for US$7 billion deal, made industrials and chemicals the best performing sector in 2018.

Another major cross-border transaction in 2018 was Pepsi’s acquisition of Sodastream, the manufacturer of a device to make carbonated beverages at home, for US$3.2 billion. The deal is part of a larger shift in consumer attitudes towards healthier and more sustainable products.

The technology, media and telecommunications (TMT) sector in Israel continues to be a highlight. Last year, there were 29 deals worth US$4.5 billion, making TMT the best-performing sector in terms of volume.

Coming on the tail end of a sweeping wave of consolidation in the semiconductor industry, US-based KLA-Tencor’s US$3.1 billion acquisition of Israeli Orbotech was the largest TMT deal of last year in Israel.

The cybersecurity sector also saw a number of high-profile deals. The largest deal of the subsector saw the NSO Group acquired in an approximately US$1 billion management buyout backed by PE firm Novalpina Capital.

The health of the cybersecurity startup ecosystem in Israel was made evident in a number of acquisitions by large multinational giants in the field over the last 18 months. In April of 2018, Palo Alto Systems acquired endpoint security provider Secdo for a reported US$100 million, while in October, Check Point acquired cloud security provider Dome9 for a US$175 million. Already in 2019, Symantec made the significant planned acquisition, also in cloud security, of Luminate Security for US$200 million.

TMT continues to shine in the first five months of 2019—all of the top five deals so far this year have taken place in the sector.

Israel’s reputation for innovative technology goes beyond the TMT sector, however. The pharma, medical and biotech (PMB) sector was the third-best performing sector by volume. The largest deal in the sector saw Medtronic, the world’s largest medical device firm, acquire Mazor Robotics, the manufacturer of a robotic guidance system for spine surgery, for US$1.3 billion.

In 2018, domestic M&A in Israel hit the highest total deal value on Mergermarket record. Some of that activity was spurred by the need to comply with the country’s “Law for the Promotion of Competition and Reduction of Concentration,” which came into effect in December. The law had the aim of reducing the number of corporate layers in pyramidal companies, separating financial entities from non-financial ones and restricting marketwide and industry-specific concentrations of ownership.

The largest domestic deal of 2018 saw holding company Equital acquire the 62.93% of its subsidiary Jerusalem Oil Exploration Limited (JOEL) which it did not already own for US$2.7 billion, in order to comply with the legal requirement to reduce the number of corporate layers. Another major domestic deal last year saw the Ofer family split between them the ownership of their real estate and banking holdings. As part of this, Eyal Ofer acquired an 18.99% stake in Mizrahi Tefahot Bank for US$766 million.

While these examples from 2018 can be attributed to shareholders and corporations rushing to comply with pending regulatory changes, the domestic M&A trend could be set to continue: White & Case’s annual survey of senior Israeli executives found that 69% of respondents believe that Israeli private companies would be one of the two most active types of acquirers in 2019, compared to only 23% in last year’s survey.

While Q1 2019 marked a decline in M&A activity compared to the same period the previous year, the survey results reveal a bullish and optimistic outlook for Israeli dealmaking in 2019 and beyond.

The survey also found that 43% of respondents predict that competition for Israeli assets will increase significantly over the coming 12 months, compared to only 28% of respondents who felt that way a year ago.

The overwhelming majority of respondents to our survey expect their organizations to increase their M&A activity this year. Almost three-quarters (76%) believe their companies will be involved in more deals.

Even a potential global economic downturn is not dampening enthusiasm. More than three-quarters of respondents feel that a slowdown in the coming 12 months would not inhibit their deal plans.

With sentiments riding so high, there is a good chance that 2018’s record M&A value figures could be broken in 2019.