FTC Puts Influencers and Sponsors on Notice with $15.2 Million Judgment

“Influencers should be on notice,” Federal Trade Commissioner Noah J. Phillips tweeted on March 6, 2020. This tweet formed part of a thread discussing the FTC’s settlement with Teami, LLC, a tea and skincare product marketer charged with engaging in deceptive influencer advertising tactics.

In November 2019, the Commission published “Disclosures 101 for Social Media Influencers,” which laid out guidelines for influencer marketing. One guideline required influencers to place a disclosure of their relationship to a brand where it will be “hard to miss,” commenting that required disclosures are likely to be overlooked if placed “anywhere that requires a person to click MORE.”

The FTC’s complaint contended that influencers who posted about Teami’s products violated this guideline by placing brand disclosures at the end of a lengthy caption, requiring a viewer to click “MORE” to see the disclosure. And the health claims contained in the posts themselves—that Teami’s detox teas could lead to weight loss and treat conditions like migraines, clogged arteries, and even cancer—were unsupported by credible science, the complaint alleged. 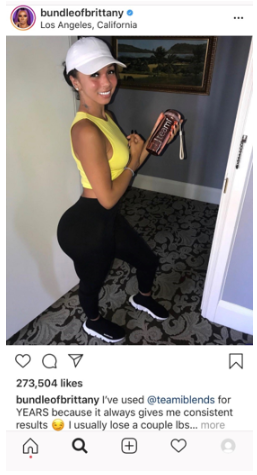 By a unanimous vote, the FTC authorized a stipulated final order that imposed a $15.2 million judgment against Teami, an amount which represented the total sales of the challenged products. $14.2 million will be suspended upon the payment of $1 million based on Teami’s inability to pay the entire judgment. The order further requires that Teami’s advertisements include clear, conspicuous disclosures of material connection with its influencers.

In addition to the final order against Teami, the FTC also sent warning letters to ten influencers who posted about Teami’s products, including Adrienne Bailon, Jordin Sparks, and Cardi B. The warning letters stated that all material connections to a brand should be disclosed above the “MORE” button and should not be hidden among multiple hashtags.

The FTC has recently shown an increased focus on influencer advertising. This settlement and associated warning letters come on the heels of the FTC’s recent announcement regarding its plans to update the endorsement guidelines. We therefore expect more FTC action—and potentially more regulations—on the horizon.