A patent confers a negative right and, therefore, does not give the right to exploit the invention, but to prevent this exploitation by third parties. This is one of the principles of the patent system; it is also one of its most difficult concepts because it is not intuitive.

The very name "defensive patent" seems to go against the above principle. In fact, the defensive patent does not change the equivalence infringement analysis since an alternative embodiment will be obvious or not regardless of whether it is claimed in a subsequent patent application. Instead, it may be a better (or more credible) way of presenting the non-infringement argument to a judge, since the objectivity of the patent office examiner is not in question.

In Spain and other neighbouring countries the most common equivalence infringement test is derived from the Catnic/Improver questions developed in the British courts. In Spain, the test currently accepted derives from Supreme Court Sentence 223/2015, of 29 April, of the Civil Chamber, Section 1, concerning preparation process claims related to the active ingredient escitalopram[1]. This test is based on the following three questions:

The defensive patent is related to the second question of the test, i.e. the obviousness of the alternative. According to this question, if the alternative was not obvious in view of the possibly infringed patent on its priority date, there would be no infringement.

Simply put, it is usually contended that if a valid patent (the "defensive patent") protects the alternative in question, exploitation of the alternative does not infringe by equivalence any patent previous to the defensive patent. This is because the claim protecting the alternative is inventive (i.e. not obvious) with respect to the relevant prior art, of which the patent that could be infringed forms part. Conversely, if the claim protecting the alternative of this second patent is considered to lack inventive step, then its exploitation infringes by equivalence, at least in relation to the second question of the prior test.

Neither of these two statements are absolute truths, and the defensive patent must be carefully assessed in order to reach a proper conclusion.

A defensive patent should only be considered to fulfil its defensive function if its inventive step is based wholly or partly on the element on which the equivalence is assessed. Otherwise, this patent should not be a non-infringement argument.

An example makes it easier to explain this situation. Imagine a first patent protecting a mechanical device comprising a "spring" and an "insulating film". A patent is then applied for and granted for a mechanical device that only differs from the one already patented in that it comprises a "rubber band" and a "cork film". This second patent, if valid, has novelty and inventive activity. Let us suppose that the inventive step derives from the unexpected advantages of cork as opposed to the insulating materials of the films described in the first patent, and there are no arguments of inventive step for the use of the rubber band.

The commercialization of the device covered by the second patent (the "disputed embodiment") would not constitute a literal infringement, since it does not have a spring. The analysis of possible infringement by way of equivalence cannot focus on the use of "cork film", since it falls literally within the definition claimed ("insulating film"), but only on the use of "rubber band".

The fact that the second patent has been granted should not automatically serve as a defence for non-infringement by equivalence, as this only indicates that the "cork film" is inventive, although this fact is irrelevant from the point of view of infringement as it is literally covered by the claim.

Thus, since the analysis of possible equivalence focuses on the "rubber band" versus the "spring", if the second patent does not offer inventive aspects as regards this replacement, its grant should not be considered a useful argument to defend non-infringement by equivalence.

Conversely, if the patent had been granted on the grounds that the exchange of the "spring" for the "rubber band" is inventive (not obvious), then the grant of the patent should exclude the possibility of infringement by equivalence.

Rejection of the defensive patent for lack of inventive step, even if the first patent alleged to be infringed is used as a prior art document, should not automatically be considered an argument for infringement by equivalence either.

One of the most important factors in assessing both infringement and patentability requirements is what documentation is relevant to the study. A possible representation of the situation described above is as follows: 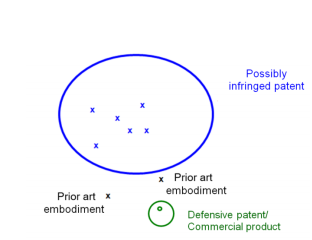 The first (possibly infringed) patent is shown in blue with its concrete examples. Prior art embodiments known before the defensive patent are represented in black, it being irrelevant whether they were known before or after the first patent. Finally, the subsequent defensive patent, including the example that has been commercialized and for which the possible infringement is being assessed by equivalence, is shown in green.

For the assessment of the inventive step of the defensive patent, all the documents known before its relevant date, in this case the black and blue disclosures, plus the common general knowledge at that date must be considered. However, the possible equivalence should be assessed taking into account only the content of the allegedly infringed patent, blue, and the common general knowledge.

Assuming that the possible inventive step of the defensive patent is based precisely on the presence of the element that is an alternative to the element present in the claim of the possibly infringed patent, i.e. on that element on which the possible infringement is analysed by equivalence, there are several scenarios:

Sentences of the Spanish Supreme Court

Supreme Court Sentence 309/2011, of 10 May, of the Civil Chamber, concerning a process for the preparation of the active ingredient olanzapine, analyses the possible infringement by equivalence, and considers the test of the three questions to be appropriate for this purpose.

Subsequently, the Supreme Court has ruled several times on the application of the Doctrine of Equivalents. Specifically, in the already mentioned Sentence 223/2015, of 29 April, it goes into greater depth in the analysis of the second question.

On the one hand, it indicates that the granting of the defensive patent does not ensure that there is no infringement by equivalence:

It goes on to state that an alternative does not have to be inventive (from the point of view of patentability) in order to deny infringement by the answer to the second question of the test:

And, conversely, it may also be the case that a subsequent development does not overcome the threshold of inventive step required to be patentable because, as a whole, for a person skilled in the art, it is clearly derived from the closest state of the art at the determining moment of its priority, but which does not however infringe the earlier patent since the alternative used to replace one of the technical features of the claims, despite not altering the operation of the invention, could not have been considered obvious by a person skilled in the art at the priority date of the allegedly infringed patent.

This Sentence establishes that the appropriate date to assess the infringement is the priority date of the possibly infringed patent. It is precisely this difference in time that explains why the study of infringement and patentability starts with completely different information, as has already been indicated in this work, and is reflected in the Supreme Court's Sentence: