We explore the potential rise of renewable energy power purchase agreements (PPAs) in the New Zealand market. In this article we discuss why PPAs have become so popular around the world and how we see them fitting in within the New Zealand market and also look at the various sectors that we have seen participate in the PPA market to date. So, what are PPAs, what is their relevance in New Zealand and what advantages do they present to electricity users?

Globally, PPAs have become one of the most common ways for renewable energy projects to achieve long-term price security. These structured agreements provide project revenue certainty for investors and developers, removing a significant roadblock to financing and building new renewable energy facilities.

A corporate PPA is a long-term contract under which a business agrees to purchase electricity directly from a generator of renewable energy, usually at a fixed price. This differs from the traditional approach of simply buying electricity from retailers on short or medium terms at fluctuating market prices (often known as a utility PPA). This article does not discuss utility PPAs but instead focuses on the renewable energy corporate PPA.

PPAs are very well established in the US and many European markets. They are not entirely new to New Zealand either and we have seen a recent uptake in attention across the country. For example, last year Tilt Renewables entered into a PPA with utility Genesis Energy for the output of its 130MW Waverley Wind Farm. The Ministry of Business, Innovation and Employment (MBIE) is also currently investigating the incorporation of PPAs into the national energy framework via the establishment of a PPA platform.

In comparison to the US and Europe, the New Zealand PPA market is in a relatively nascent stage. However, it seems only a matter of time before the use of PPAs becomes more common across the country. The increasing frequency with which large, well-known corporates have entered into PPAs and invested in generation assets of their own, stems from both the economic and environmental benefits they provide. This appears to be no exception in New Zealand as many of the major energy developers and consumers are exploring the possibility of incorporating PPAs into their energy strategies.

As global business becomes more environmentally conscious, our clients have become increasingly keen to source their power from green sources. This movement was initially led by the Big Tech companies in the US and Europe, and with the arrival of Microsoft's datacentre in New Zealand it seems likely that a similar trend will take place here. New Zealand's share of renewable electricity is strong – however, only 40% of primary energy supply comes from renewable sources. For many businesses, therefore, taking power from the grid does not satisfy their internal or external sustainability commitments.

In certain jurisdictions, including New Zealand, these PPAs will also include obligations to provide or procure certain metering and ancillary activities that are undertaken by experienced third parties. As such, if the generator does not have the capacity to fulfil these obligations, the corporate offtaker may need to enter into a back-to-back agreement with a third party under which the third party commits to undertake these relevant obligations.

Synthetic PPAs are, at present, the most common form of PPA in New Zealand. In a synthetic PPA structure no power is physically traded. Instead, the agreement functions with a derivative contract structure where the corporate offtaker and renewable energy generator agree a defined strike price for power generated by the generator’s renewable energy project. The corporate offtaker will enter into a separate agreement with their electricity retailer to acquire electricity at the spot price.

The PPA then works as a financial hedge:

Private Wire PPAs, unlike Physical PPAs, address transfer of electrify directly from the generator's facility to the corporate offtaker, rather than being notionally passed through a national power grid. The renewable energy generating facility will be located at, or close to, the offtaker's assets and will usually only supply power to the offtaker.

Private Wire PPAs may often be used in conditions where the offtaker wishes to secure its own source of power (e.g. for use in a factory or an off-grid location).

How can corporate offtakers benefit from PPAs?

Companies will have a variety of different reasons to source power from renewables, but the possibility of securing lower and fixed electricity costs is a major factor in their growing popularity. Indeed, a recent survey of 1,200 companies found that 92% that were sourcing from renewable energy technologies were doing so to reduce their electricity costs. In the face of a steep global decline in the price of renewables, companies are entering the PPA market to take control of their electricity costs. Demand from corporates worldwide for renewable energy is now exceeding supply1.

We have seen that PPAs can potentially provide offtakers with savings of up to 45% on their electricity bills. In this context, PPAs offer a sustainable way of hedging the future cost of electricity against volatility in the market. The below graph from the International Energy Agency and Bloomberg NEF highlights the global rise of the corporate PPAs (shown as agreements by volume of contracted offtake): 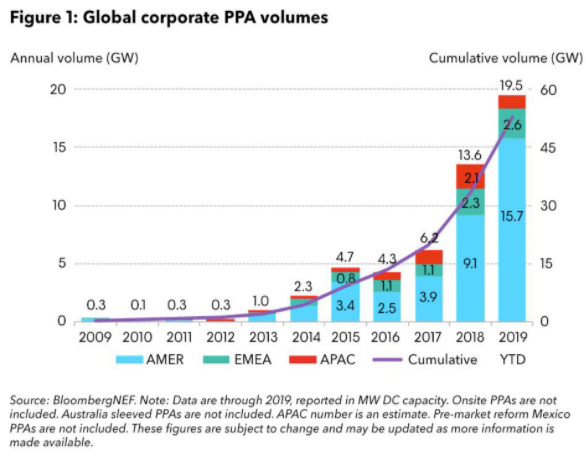 Despite the falling cost of renewables, users of electricity via the spot market in New Zealand are exposed to periods of unpredictably high electricity prices. Recently, there have been various incidents of market volatility that have pushed the market power price upwards. They can come in various shapes and forms. For instance, natural events: this year the North Island suffered its worst drought in 50 years, with clear implications on the price of hydroelectricity. Alternatively, there are arguments that high prices can be caused by human intervention. For example, earlier this Winter the Electricity Authority issued its preliminary decision on an Unfavourable Trading Situation (UTS) in which it is alleged that certain Gentailers unnecessarily spilt water from their hydro facilities which could have been used for generation. The authority has suggested that this UTS might have costed other electricity retailers an extra NZD80 million for power on the wholesale market.

In the face of similar peaks of market volatility in other countries, a longer-term market hedge against power prices has been attractive to a number of our clients.

PPAs are also helping companies to meet their sustainability commitments. In 2019 almost 400 companies around the world agreed to set science-based targets for their environmental commitments, more than doubling the total number of companies with such goals. Through entering into direct agreements with renewable energy facilities, companies can verify the renewable source of their electricity and also their contribution to the development of a specific project. For this reason, PPAs have been an essential component in the energy strategies of many RE100 companies who wish to demonstrate additionality in their green contributions.

Which sectors are using corporate PPA?

We have advised on a wide variety of significant PPAs since we worked on the first European PPA in 2013. Originally demand was led by Big Tech offtakers, although the large industrial users of electricity soon entered the market. However, over the last five years, we have seen an exponential increase in the introduction of other sector participants to the PPA market. As the benefits of these arrangements have become better understood, they have become increasingly common across the board. We are now advising clients on transactions incorporating PPAs into a range of markets, including retail, government, education, agriculture and financial and professional services.

In New Zealand the PPA market is currently in a relatively nascent stage. However, this is expected to change. There has been particular interest from the agriculture and industrial sectors. A group of New Zealand’s largest energy users has announced its intention to procure a large proportion of their electricity from renewable electricity sources. This would be achieved via PPAs. The group is proposed to include Fonterra, pulp and paper manufacturer Oji Fibre Solutions, forestry and timber company Pan Pac Forest Products, and metals industry companies New Zealand Steel and Pacific Steel. This procurement project, which is being led by the Major Electricity Users Group (MEUG), will seek to buy electricity from a range of new projects, potentially including geothermal, solar and wind sources.

However, we do not expect the rise of the NZ PPA to be restricted to the industrial and agriculture sectors. For example, Microsoft has announced its intention to develop a data centre in Aotearoa. Microsoft has procured more than 1.9GW of renewable energy globally in its places of operation and will likely implement a similar strategy again in New Zealand. Throughout the world we have seen Big Tech companies leading the way in developing the PPA market, and so it seems likely that the New Zealand market will follow suit.