Romania has a minimum wage set by law. Each year, it is set by a separate legal norm. For 2019 there are two different minimum wage levels: 2,080 RON and 2,350 RON. For the higher wage, the key elements are the necessary level of education for the role, and the employment period.

Starting in 2019 a compulsory and significant increase of the minimum salary, as well as tax incentives, were introduced. The measure applies mostly to the construction industry, but also concerns companies with other particular activities. (We have already reported on that in greater detail.)

In 2019 the new minimum salary for the construction industry was set at 3,000 RON gross. At the beginning of this year, by means of the controversial emergency ordinance 114/2018, a series of special incentives were introduced in the construction industry, offered when certain conditions are met, and applicable until 31st December 2028. The most important are:

Another Emergency Ordinance, EO 43/2019, changed the minimum wage in construction, which was initially set just for 2019. Now, employees in the construction field will benefit from a gross minimum wage of 3,000 RON, for the entire incentive period from 1st January 2020 to 31st December 2028. Other changes concern the completion and clarification of the conditions.

Failure to observe the minimum wage rule will be seen as an offence, punishable by a fine of 300 - 2,000 RON. The tax incentives will be cancelled and tax obligations will be calculated retrospectively, with additional payment of default interest, and late payment fines, which can result in significant increases in payments due.

Comparison of wage levies applicable to industries other than construction

The following table compares wage levies owed for all three legally established minimum wages, according to a salary calculation with the regular tax rates. Wage levies for construction are shown with the current incentives applied. 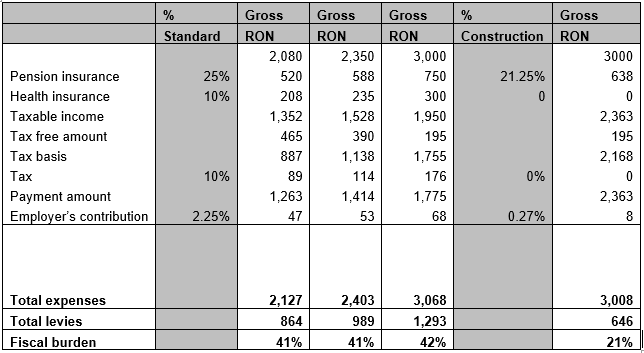 Construction employees owe only the reduced pension insurance. The employer sets a lower rate for labour insurance, but in practice, problems arise. The 112 Declaration can only be filled in with the standard percentage rate.

Overall, the tax burden in the construction industry is significantly lower than in other fields (21% compared to 41/42%). However, the total expenses of the employer are higher overall. By raising the minimum wage, the total costs rise for each employee previously earning a salary of less than 3,000 RON.

It is known that Romania has a high burden for wage-related income. A study published this year that compares minimum salaries in 26 EU states shows that Romania has a tax burden per employee of 40.85%. It is significantly higher than other states in central and eastern Europe: Slovakia – 17.86%, Bulgaria – 22.40%, Poland – 29.29% and Hungary 33.5%. Up to now there have been no efforts on the part of the legislative body to generally reduce the tax burden in all commercial fields.