On 5 December 2018, the Fair Work Amendment (Repeal Four Yearly Review and Other Measures) Bill 2017 was passed by both houses of Parliament, and is awaiting royal assent as at the date of publication.

2.1 What are the amendments to the FW Act?

The Bill amends the FW Act to state that an EA will also have been “genuinely agreed” to by the employees covered by the EA if the FWC is satisfied of the following two elements:

1 The EA would have been “genuinely agreed” but for “minor procedural or technical errors” made in relation to the following requirements:

2 The employees covered by the EA were not likely to have been disadvantaged by the errors, in relation to the above requirements (e.g. considering the effect of the error, or the circumstances of the error).

Employers should be aware that even though this new provision enables the FWC to overlook errors made in the EA-approval process, these errors must meet both elements of the test set out above.

2.2 When do these new provisions apply? 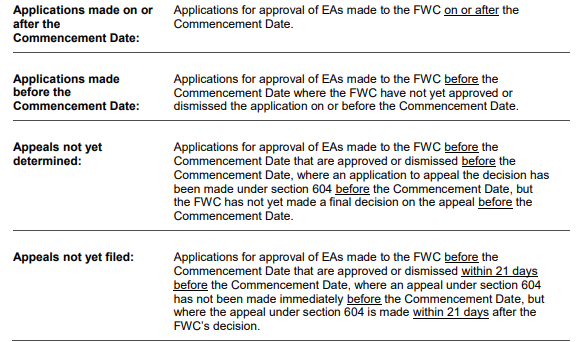 The Bill removes the requirement for the FWC to conduct 4 yearly reviews of modern awards, effective from 1 January 2018.