What is a cross-border merger?

A cross-border merger involves a merger between two or more European Economic Area (“EEA”) limited liability companies. At least two of the merging companies must be governed by the laws of different EEA states.

Annual Irish cross-border merger statistics are detailed in the graph below: 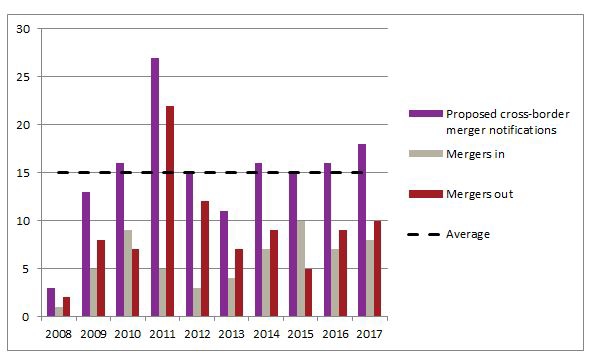 Each cross-border merger involves a company from one EEA state acquiring at least one company from another EEA state. Acquired companies are dissolved without going into liquidation, with the acquiring company taking on all the assets and liabilities of each acquired company. The terms of a cross-border merger are recorded on a document known as the common draft terms of merger which are approved by each merging company.

Certain procedures set down by legislation must be carefully followed by a merging company including advising shareholders and employees of how the merger will operate, filing the common draft terms with the local company registry, and making documentation available for inspection at the company’s registered office.

There are three types of cross-border merger which can be used depending on the circumstances, namely:

There are a number of advantages of cross-border mergers, including:

Legal certainty A cross-border merger cannot be declared null and void after it has been approved.

Cost savings An acquired company is dissolved without going into liquidation which obviates the need to incur liquidation costs.

Less paperwork Assets and liabilities are transferred by operation of law meaning that much of the documentation required to effect transfers in traditional sales, purchases or reconstructions is not required in the case of a cross-border merger.

Flexibility The merging companies can generally select a date from which the transactions of an acquired company are to be treated for accounting purposes as being those of the acquiring company.