The green bond market has bounced back following a downturn in Q2 at the height of the Covid-19 crisis. In Q3, green bond issuance amounted to US$ 63.56 billion a 10% increase compared to Q3 20191. And this trend looks set to continue so that green and social products are likely to play an important role in creating a sustainable economic recovery from the crisis2.

It is Europe's sovereigns and corporates that have taken up the lion's share of both green and social bond3 issuance, and the euro is already the main currency used for green bonds worldwide.

The matter of creating a European standard for green bonds to consolidate the EU as a global hub for green finance is therefore more relevant than ever.

Background to the new European standard

There is currently no harmonised international standard for green bonds. Divers initiatives have been developed in various jurisdictions and regions. Internationally, the International Capital Market Association (ICMA) principles are widely accepted (see diagram below).

However, there still exists a large measure of discretion as to the labelling of green bonds, in particular as regards the choice of projects, and the method of reporting and verification. The lack of clarity or accepted standards has raised concerns in some quarters about "greenwashing" -- manipulation of the marketing message by claiming that products are greener than they really are.

It was in the spirit of reducing this uncertainty and supporting growth by enhancing the effectiveness, transparency, comparability and credibility of the green bond market that the European Commission published an Action Plan in March 20184, in which they committed to developing standards and labels for green financial products and instruments, including a European Green Bond Standard (EU-GBS).

A Technical Expert Group on sustainable finance (TEG) was set up to provide guidance and recommendations based on current best practices and feedback received from stakeholders. The latest guidance was released in March 2020, including an updated proposed standard5.

What is being proposed?

EU green bonds would be any type of listed or unlisted bond or capital markets debt instrument aligned with the EU-GBS. They could be issued by a European or international entity in any sector.

The EU-GBS will be a voluntary standard for issuers wishing to align themselves with best practices in the market.

Here are the key new elements compared to existing standards: 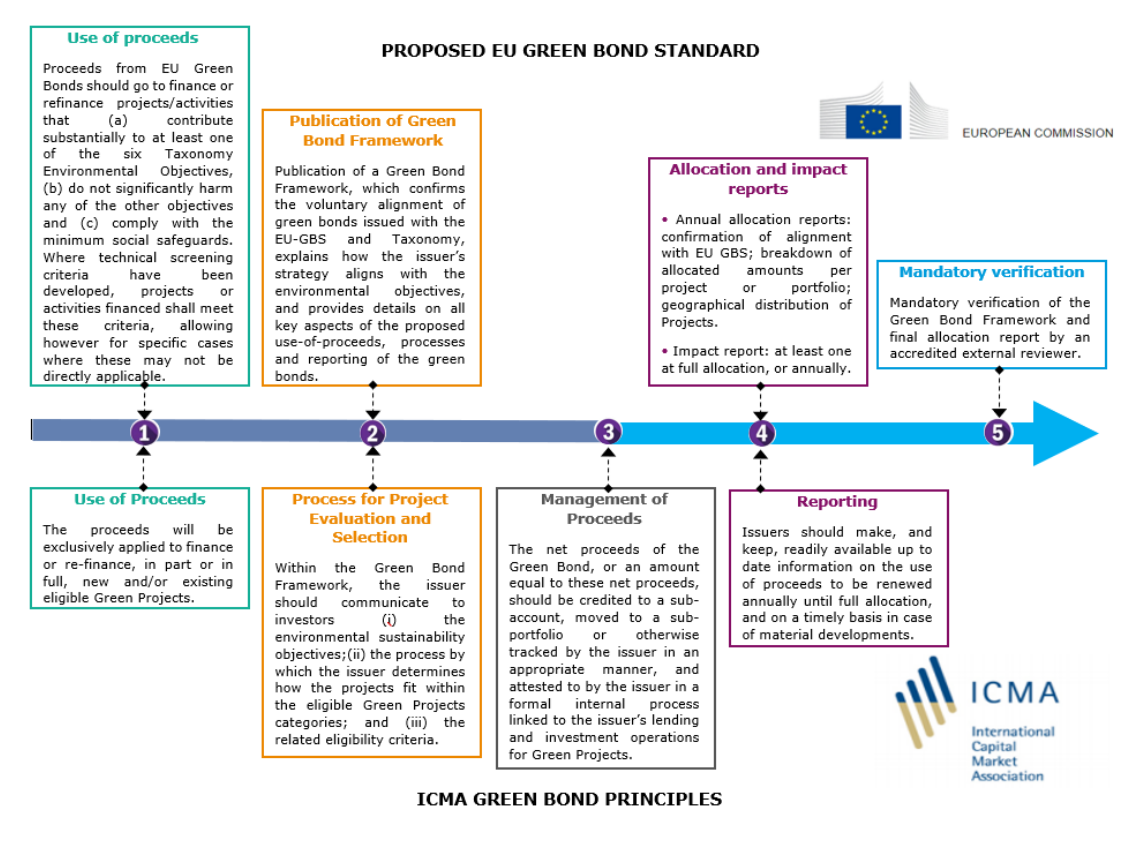 1. Alignment of the green projects and activities with the EU Taxonomy

Use of proceeds of the Bond would be aligned with the European Taxonomy Regulation which establishes an EU-wide classification system (Taxonomy) providing companies and investors with a common language for determining which economic activities can be considered environmentally sustainable6.

Through the standardisation of the Green Bond Framework, allocation reports and impact reports7, the issuer will provide the market with harmonized reporting on green strategy, types of project, assessment methodology and impact.

A system of formally accredited external reviewers will be set up, initially on a voluntary market-based basis, and subsequently under supervision of the European Securities and Markets Authority (ESMA).Verification of the "Green Bond Framework" and final allocation report will be mandatory; impact reporting verification is not mandatory but encouraged.

Consultation of the European Commission

A targeted stakeholder consultation on the EU-GBS and the work of the TEG to date ran for an extended period of 16 weeks between 12 June and 2 October 20208.

Some results of the consultation

ICMA's responses by far the most detailed of those discussed in this article. This was presumably motivated to a large extent by the desire to ensure that the good work done in developing their own green bond principles be enhanced rather than compromised by any new European norms. They were also no doubt anxious to ensure that the standard is practicable for international capital markets participants and perhaps wary of some of the inefficiencies and disappointments that have ensued from the EU's previous interventions in capital markets legislation. And indeed, the Prospectus Regulation and potential changes necessitated by the introduction of the EU-GBS took up some space in ICMA's Response to the Public Consultation on the Renewed EU Sustainable Finance Strategy earlier in the year, where they militated against altering European prospectus legislation to cater specifically for EU Green Bonds.10

One of ICMA's primary concerns emanating from the EU-GBS consultation, perhaps in view of the international nature of the organisation, was that the standard should not prove too Euro-centric to the extent of diverging too far from international norms, while making it difficult or impossible for issuers outside the Union to comply.

They also encouraged a pragmatic and holistic approach to interpretation of the EU-GBS, to take advantage of existing norms and internationally accepted forms of certification, at least at the outset while the Taxonomy is under development and testing. As in the feedback of the French Autorit des Marchs Financiers (AMF), there was a concern that if the criteria for impact reporting and verification are too prescriptive, this might have the effect of adding substantial cost without in fact capturing the main environmental benefits of the project, especially where the project is innovative11.

Other specific points raised by ICMA were:

The feedback of ESMA is far more concise and builds upon their response to the Public Consultation on the Renewed EU Sustainable Finance strategy14. ESMA also responded to the European consultation by supporting the creation of a "robust standard for green bonds".

A particular ESMA focus in this consultation and the previous Public Consultation on the Renewed EU Sustainable Finance Strategy was on the evaluation process. As the European capital markets body, ESMA is keen on encouraging the creation of a centralised regime for registering and monitoring external reviewers at the European level and in carving out a role for itself as the supervisory body. It argues that an EU supervisory set-up will benefit from economies of scale and ensure consistency and cost savings for both EU-GBS users and external reviewers, while avoiding market fragmentation in terms of regulation and supervision. Moreover, ESMA could leverage on its experience in supervising local competent authorities given the similarities of activities and actors.

French companies and state-related issuers have taken up a disproportionately large portion of recent green and sustainable bond issuance, so the views of the AMF carry some weight.

The AMF welcomes the EU-GBS project, and feels that the content fulfils expectations regarding transparency and reporting. However, the AMF urges caution in the use of the European Taxonomy in the short term. It is of the opinion that it is "preferable to wait for the finalisation and testing of the technical criteria before imposing a strict use of the taxonomy".

Should leniencies and derogations from the EU-GBS be available for non-EU issuers or non-EU projects? Here, the AMF advocates stringency and conformity. In tones reminiscent of pan-European discussions on another subject, they make the point that signing up to the EU-GBS is voluntary no one is forced to join -- but once they do, they need to play by the same rules as everybody else to ensure a an even playing field.

One specific and important question, which was also dealt with by ICMA, is at what point eligibility should be tested: at the structuring stage only, or regularly down the line throughout the life of the bond. Screening at the outset is recommended by the AMF in order to avoid market confusion and reputational risk arising from loss of a green label if the criteria subsequently change16.

On the question of other types of sustainable financing, the AMF is generally aligned with ICMA. Let the social and hybrid "sustainable"17 bond market settle first, then consult and put the appropriate European standards in place.

Based on the outcome of these two consultations, as well as ongoing bilateral stakeholder dialogues, the Commission is due to take a decision before the end of the year on whether a legislative approach will be pursued and what form the final EU-GBS should take.