Software Patents and Manner of Manufacture: An improvement in the computer?

In Encompass Corporation Pty Ltd v InfoTrack Pty Ltd [2018] FCA 421, Justice Perram of the Federal Court of Australia found two innovation patents to be invalid for not involving a manner of manufacture, thus failing the Australian test for patentable subject matter. The patents were found to be valid on all other grounds (novelty, innovative step, disclosure, support), so the finding on manner of manufacture was critical. Encompass has filed an appeal from the decision to the Full Federal Court and it is likely that the appeal will be heard later in 2018.

The Patents: Processes for collecting and displaying data

In this case, Encompass Corporation Pty Ltd and SAI Global Property Division Pty Ltd (the Applicants) claimed that Infotrack Pty Ltd (the Respondent) had infringed Encompass's Australian Innovation Patents No. 2014101164 (the 164 Patent) and No. 2014101413 (the 413 Patent). The patents were very similar and were both entitled ‘Information displaying method and apparatus’.

These patents relate to combining data from disparate databases (eg, a motor vehicle registry database, a land titles database, and a database of companies) and displaying such data in a network of entities and connections, for example as shown in Figure 1 below. 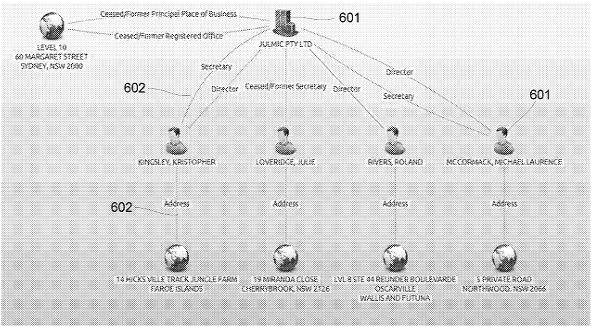 The patents identified the need, when collecting information about a company or other entity, to access and search multiple databases, complicated by the fact that some databases restrict access to their records or store their records using different data formats. The solution was to provide a series of steps beginning with the generation of the network of entities (eg, business names, directors’ names, addresses), with links between the entities describing their relationships to one another. This network representation was displayed to a user, who was able to select one or more of the entities for which searches were to be carried out across remote data sources, in order to determine additional information.

Importantly, the step of searching across remote data sources might have further involved purchasing records from the data source, thus enabling access to information secured behind a pay-wall. It was this purchasing step that, during the proceedings, was found to provide an innovative step over the prior art.

The patent claims relate to performing a search in response to user selection of one of the network nodes, eg, claim 1 of the 413 Patent provides (author's emphasis):

1. A method of displaying information relating to one or more entities, the method including, in an electronic processing device:

i) a number of nodes, each node being indicative of a corresponding entity; and,

b) causing the network representation to be displayed to a user;

d) determining at least one search to be performed in respective of the corresponding entity associated with the at least one user selected node;

f) causing any additional information to be presented to the user.

The Innovative Step: Payment for data as part of the process

Justice Perram accepted that the payment step was a variation from the prior art and that it did make a substantial contribution to the working of the invention as claimed, thus there was an innovative step; however, his Honour did not regard the payment step as being “weighty”, and this may have influenced his decision on manner of manufacture.

His Honour found that searching multiple remote data sources was a variation from the prior art but that this did not involve a substantial contribution to the working of the invention as claimed. If such a feature had been found to be part of the innovative step, the decision on manner of manufacture may have differed.

For an invention to be patentable in Australia, it must be a “manner of manufacture”. This requirement is intentionally non-specific to particular technologies, and since the High Court’s 1959 decision in National Research Development Corporation v Commissioner of Patents [1959] HCA 67, it has been held to cover most subject matter including, since at least 1991, software (International Business Machines Corporation v Commissioner of Patents [1991] FCA 625; (1991) 33 FCR 218 (IBM)).

In this case, referring to principles established in Research Affiliates and RPL Central, Justice Perram stated:

It is […] necessary to ask whether the method (or apparatus) disclosed in the Patents involves the implementation of an abstract idea which [as per Research Affiliates] results in ‘an improvement in the computer’. Or, [as per RPL Central] whether to the contrary it can be said that the method ‘merely requires generic computer implementation’.

He then mused that:

‘improvement’ seems designed to capture the computer performing some activity which it was not possible to perform prior to the method. Thus in IBM the method for drawing the curves without using floating point arithmetic opened the way for the computer to be used more efficiently than had been previously possible.

Decision: No improvement in the computer

Justice Perram, when considering the issue of patentability, acknowledged that the implementation by a computer of the combination of steps of the invention constitutes a new use of the computer, capable of enhancing the experience of a user. However, what the inventions failed to do, in his Honour’s view, was to cause an improvement in the computer itself.

Justice Perram noted that, in principle, any software could be said to cause an improvement in a computer, because without it, the computer would not be able to perform a certain task. The requisite improvement however was considered to be one that provides the computer with some new ability, previously unattainable. A case in point of the necessary improvement was IBM’s software for drawing curves without using floating point arithmetic.

“the method disclosed in the Patents (and the apparatus) result in the computer being used to do something it has not been used to do before. But it is not clear to me that in doing so they have improved the functionality of the machine. This is because the method (and apparatus) merely involve a concatenation of three other methods, none of which is new: the use of a network representation, the querying of remote data sources and the use of a purchasing step. […] It is true that I have accepted that the addition of the purchasing step has the consequence of providing an innovative step. But it does not follow that the method and apparatus involve any improvement in the computer. None of the three elements of the claims is, in itself, an improvement in the functionality of a computer. I would accept the combination of the three elements in the innovative way disclosed in the Patents certainly provides an enhanced experience for the user of the computer. But it is not self-evident that there is a necessary connexion between an enhanced user experience and an improvement in the computer. In this case, so it seems to me, the enhanced user experience results from the combination of well-known computing mechanisms. But unless that combination can itself be said to have brought about an improvement in the computer this will be beside the point.

Justice Perram concluded that “[a]n improvement in the computer does not result. For that reason I do not think that the Patents involve a manner of manufacture and they are accordingly invalid.”

This case demonstrates that it may be beneficial to link a discussion of innovative step (or inventive step) to that of a technical contribution (e.g., new functionality in a computer) despite the Australian requirements for inventive/innovative step and manner of manufacture being formally separate.

On this note, following a recommendation by the Productivity Commission in its Inquiry Report on IP Arrangements that "IP Australia should reform its patent filing processes to require applicants to identify the technical features of the invention in the set of claims", there has been a public consultation by IP Australia, in which three options were put forward to improve the information available to Examiners when assessing inventive step. You can read more about that public consultation here. In response to that consultation, IP Australia has indicated that they propose to adopt a requirement that Examiners assess technical features through the inventive step requirements, and that this change will be implemented through changes to the Patent Manual of Practice and Procedure.