Researchers out of the University of Colorado have found that high rates of violent crime in the local community can lead to people taking fewer risks, which can in turn reduce their living standards and negatively impact on the local economy,

The study, entitled ‘Impact of Violent Crime on Risk Aversion: Evidence from the Mexican Drug War’, has been described as the first of its kind and used longitudinal survey data from both before and after the presence of Mexican cartels, finding that the fear associated with being in suburbs controlled by the groups had profound effects on the behaviour of residents, making them more cautious in a range of respects.

The study relied on statistics from the Mexican Family Life Survey, a longitudinal survey of over 35,000 people living in more than 8,400 households in 16 states across the country.

The survey looked at how attitudes towards risk and economic decisions changed over time.

Those surveyed were asked at various stages of, beginning in 2002.

The first follow-up was conducted from 2005 to 2006, when violent crime had remained relatively stable.

The next occurred between 2009 and 2012, a time that saw a huge escalation in violence – which coincided with President Felipe Calderon declaring a war on drugs in 2006.

The monthly homicide rate over time is depicted in the following graph: 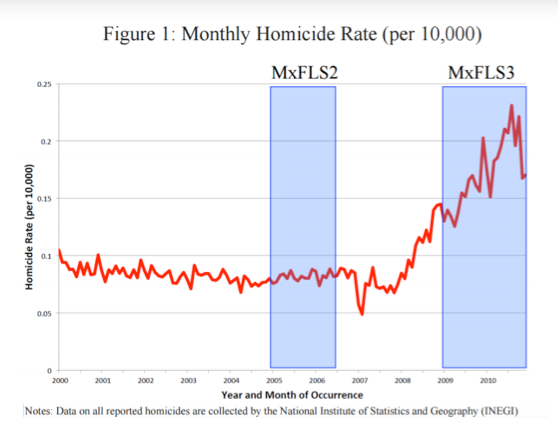 The researchers found that an increase of one homicide per 10,000 people saw a corresponding rise in the likelihood of being in the longitudinal study’s most risk-averse category by 5 percent.

The authors factored in a range of other factors, decreasing the likelihood the provided the change was caused by anything other than the rise being primarily caused by an increase in feelings of fear.

“This study allows us to rule out the policy mechanism; that improving access to health care, the economic environment or mental health will make a difference (in risk aversion),” said Ryan Brown.

The fear of violent crime was found to significantly increase risk-aversion.

The researchers found that the change in conduct led to a widespread and long-lasting impact on the economy, because those in lower income categories were far less risk averse than the most wealthy.

The seminal paper on the relationship between risk aversion and income concluded that risk averse workers have lower returns to education, are less likely to change jobs when they should, or to invest in specialised skills or work under incentive contracts.

The increased likelihood of prioritising their current situation over pursuant their own development meant a stagnation and even a downward slide in their financial situation, as “risk aversion and income are positively correlated.”

Australia does not have the widespread violence that has been caused by the Mexican war on crime.

However, the researchers observed that the perceived “fear” of violent crime can also have dramatic effects on decision-making.

So, while violent crime across the nation has steadily decreased since 2001 – and since the late 1970s in New South Wales – the propagation of the fear of violent crimes, especially the fear of terrorism, may reduce the likelihood of people seeking to “better themselves” by pursuing their own economic development.