On September 3, 2020, the U.S. Department of Justice (DOJ) issued a new antitrust policy guide—the Merger Remedies Manual (the Manual),which superseded the 2004 Policy Guide to Merger Remedies (the 2004 Guide),[2] reflecting the DOJ’s current position on remedies in all merger cases of its Antitrust Division. The Manual is intended as a “modernized” policy guide that reflects the DOJ’s “renewed focus on enforcing obligations in consent decrees and reaffirms the Division’s commitment to effective structural relief.”[3] Notably, the Manual places a renewed and pronounced emphasis for structural remedies, including adding a four-part test that must be satisfied to warrant a “stand-alone” conduct remedy.

The issuance of the Manual marks the most significant development of the DOJ’s policy on merger remedies since the DOJ’s announcement in September 2018 to withdraw its 2011 Policy Guide to Merger Remedies (the 2011 Guide),[4] restoring the effect of 2004 Guide pending the release of an updated policy.

A. Preference for Structural Remedies

Compared to its previous guidance, the DOJ restructured its newly issued Manual to reinforce its preference for divestiture as the appropriate form of remedies to resolve antitrust concerns related to transactions. The Manual largely eliminates the distinction between remedies in vertical and horizontal transactions, and explicitly states that “structural relief is the appropriate remedy for both horizontal and vertical mergers.”[5] Structural remedies are “strongly preferred” because they are “clean and certain, effective, and avoid ongoing government entanglement in the market.”[6]

Nonetheless, the Manual recognizes that tailored conduct relief may be useful under “limited circumstances” to “facilitate structural relief.”[7] Consistent with this limitation, the Manual briefly discusses the appropriate use of four types of conduct relief, all with qualifications or emphasis on their limitations:

More significantly, the Manual states that DOJ will only accept “stand-alone” conduct relief—conduct relief unrelated to structural relief—when it satisfies a newly created four-part test. This test requires that the parties prove that:

It remains to be seen whether and how this new test would be adopted by courts in the coming years, particularly the strongly worded third prong requiring that a proposed remedy should “completely cure” the anticompetitive harm.

B. Reformulation of the DOJ’s Guiding Principles for Structural Remedies

Like the 2004 Guide, the Manual articulates six guiding principles for the structure and implementation of remedies in merger cases in front of the DOJ. However, the Manual has reformulated these principles to place more emphasis on the DOJ’s preference for structural remedies that are clean and free from government regulation. 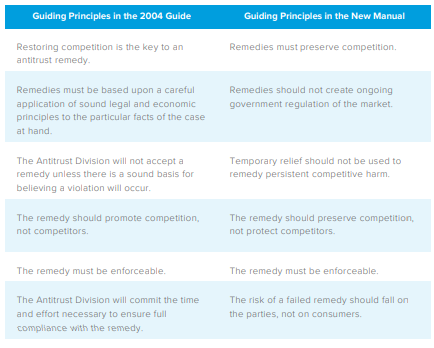 C. Highlighting Issues Not Addressed in Prior DOJ Remedy Guidelines

Some notable additions to DOJ’s guidelines made by the Manual involve issues not addressed in previous policy guides, including the government’s challenge to consummated mergers,[10] private equity as divestiture buyer,[11] the parties’ obligations to collaborate with international and state enforcers[12] as well as other federal regulatory agencies,[13] and red flags that may cause the agency to reject a proposed remedy.[14]

Post-Consummation Challenges. The Manual recognizes that remedying a consummated deal “may pose unique issues” since “the acquired assets are integrated, crafting an effective divestiture to eliminate the anticompetitive effects may be difficult, but nonetheless necessary to undo the illegal effects of the merger.”[15] The Manual provides that the DOJ is open to requiring already merged parties to unwind their transaction, and under certain circumstances, even to divest more than the acquired assets.

Collaboration When Structuring a Remedy. The Manual provides that, while the DOJ “may be able to work collaboratively with other antitrust enforcers to structure remedies that are effective across jurisdictions,” the Antitrust Division “will not advocate for remedies with international or state enforcement agencies that would not be available to the Division under United States law.”[17] With regard to collaborating with regulatory agencies when the transaction involves a regulated industry, the Manual emphasizes that “[t]he existence of regulation typically does not eliminate the need for an antitrust remedy to preserve competition effectively.”[18]

Divestiture Failure Warning Signs. Another notable addition is a set of “red flags” identifying when a remedy may not effectively preserve competition. The Manual provides that the DOJ is more likely to reject the proposed remedies that feature one or more of the following characteristics

Generally, the Manual follows the DOJ’s previous decision to withdraw the 2011 Guide and emphasize divestiture as the default remedy. It also refines the DOJ’s guidance on specific issues in structuring and implementing a remedy. The restructured sections—with updated case law, and reformulated principles, tests, and red flags of proposed remedies risking rejection by the DOJ—are all consistent with the DOJ’s emphasis on its preference for remedies that do not involve ongoing regulation or oversight by the government. Some mergers are likely to be tripped by the Manual’s firmer requirements for proposed remedies (including the newly created four-part test), so counsel will need to pay careful attention to how the Manual is accepted and adopted in courts.