In a recent court decision in Brazil, involving the questioning of the grant of a Utility Model for silicone implants, the Federal Court of Rio de Janeiro invalidated the referred Patent MU 8600958-3 (silicone prosthesis known for its conical shape), granted by the BPTO to the Plastic Surgeon, Mr. Nelson Noel Cordeiro Lima, when ruling on the invalidity lawsuit filed by the Brazilian company Silimed Indústria de Implantes Ltda. Silimed is one of the leading companies in the silicone implants field in Brazil. 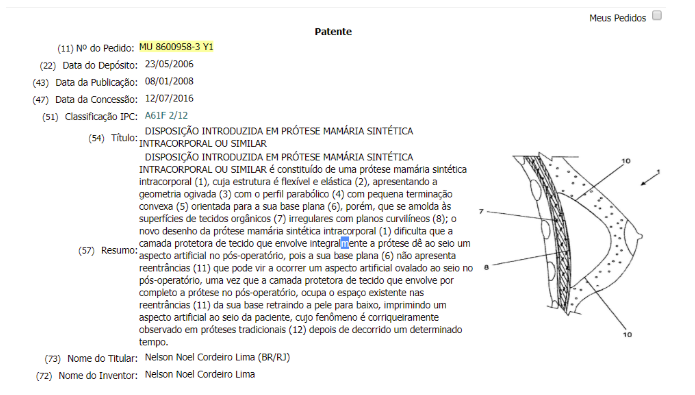 The invalidity lawsuit was a response from Silimed after being involved in a fierce dispute with Mr. Noel discussing royalties and issues on the development of technology.

In Brazil, inventions that are suitable for patent protection can be divided into two categories: utility models and patents (stricto sensu).

For the granting of a patent (lato sensu), the invention must fulfill the validity requirements of novelty, inventive activity and industrial application, as provided for in sections 8, 11, 13, and 15 of the Brazilian Industrial Property Act (Federal law 9279/96).

With respect to utility models, an object for practical use, or part thereof, is patentable if it is susceptible of industrial application, has a new form or arrangement, and involves an inventive act, that results in functional improvement in its use or manufacture.

When it comes to utility models, the criterion of non-obviousness is less strict compared to patents: it requires the inventive act (instead of inventive activity required for patents) provided that, to a technician versed in the subject, it is not derived in a common or ordinary way from the state of the art. “The inventive activity required to grant a patent registration is verified if the technological advance presented by the invention represents a solution to the existing technical problem in the area of ​​its destination, as well as if this solution is contrary to the normal activities in the same technical area, so that a subject matter expert would not adopt it. ”(TRF2, AC 20045101513998-3)

Another patentability requirement set forth in the Brazilian legislation is descriptive sufficiency, which is essential for a person skilled in the art to reproduce the subject matter of the patent without further difficulties.

Such requirement, in fact, derives from a “trade-in” upon expiration of the exclusive right to exploit the patent or the patented process: the product falls into the public domain while the technology becomes accessible to society. Therefore, the patent and utility model must clearly and sufficiently describe the object claimed.

Whenever the validity of a patent is being questioned before the courts, the Brazilian Patent Office, along with the invention holder must be jointly summoned to take part in the dispute as co-defendants. As the BPTO is a federal authority, the lawsuit must be filed before a federal court.

Likewise, if a patent application is rejected by the BPTO, the applicant can challenge the decision before the federal court, as all administrative decisions are subject to judicial review in Brazil.

Since most Judges in Brazil do not have a technical background, and the analysis of patent validity conditions is substantially technical, an unbiased expert skilled in the technical field of the patent and with industrial property knowledge will be appointed by the judge, so that the final decision is supported by the unbiased technical opinion.

If a patent does not meet one or more of the four requirements listed above, it will be declared invalid, as provided in the Brazilian IP Law, sections 46, 50 and 56.

According to most of the Brazilian case law, the expert technical opinion will influence the judge’s analysis, and although not bound by the expert’s findings, he or she will certainly refer to these in order to form an opinion and render a final decision on whether or not the invention meets the patentability conditions.

When it comes to the Utility Model granted in the name of the plastic surgeon, Mr. Nelson Noel Cordeiro Lima, for the silicone prosthesis known for its conical shape, on. Judge Eduardo André Brandão de Brito Fernandes, in charge of the 25th Federal Court of Rio de Janeiro, concluded, among other findings, that it did not present an inventive act, since no functional improvement was demonstrated in relation to the existing prostheses in the market.

In addition, the trial court considered that the technical characteristics of the prosthesis did not describe the invention in such a way as to allow reproduction by a person skilled in the art, meaning there was a lack of descriptive sufficiency.

The patent holder questioned the qualification of the appointed expert and challenged the trial court assessments based on the expert’s conclusion, arguing that the implant does not present functional improvement, as the protection is limited to the prosthesis shape, a purely aesthetic issue.

According to the panel of judges, the invention lacks a “solution for a problem that would result in functional improvement because the shape of the prosthesis allows only an aesthetic aspect, without any functionality and that the preference for a round, oval or conical prosthesis shape is a matter of fashion, and/or desire for breast shape of each patient”.

The cancellation has retrospective effect, which in turn undermines any question of royalties discussed in the infringement lawsuit.

Although the Court of Appeals’ decision can still be appealed to the Superior Court of Justice, evidence cannot be re-examined anymore.