How do you regulate an algorithm? A set of strawman remedies

The German Data Ethics Commission has published proposals for risk-based regulation of algorithms. This is just one of many legislative and regulatory proposals and reflects concern about the influence technology has over society. But how do you “regulate” an algorithm? We set out a range of remedies and consider if they would work in practice.

What is an algorithm?

An algorithm is just a computer program; a series of instructions given to a computer requiring it to process data in a particular way. Algorithms can be broadly split into two categories:

Algorithms and society – Why does it matter?

The impact of algorithms on society is significant and will become more pronounced as more and more decisions are delegated by man to machine.

Some impacts are obvious because of a direct human interaction with the algorithm. For example, artificial intelligence is increasingly used to determine if you can get a job. It will scan and assess your CV and can also assess your performance during video interview. Do you use positive words? Do you smile enough? This is not science fiction, with this technology becoming used widely in the U.S.

In other cases, algorithms are used behind the scenes by businesses and governments and have a more invisible effect. For example, determining whether you are eligible for a mortgage, to decide what offers or advertisements you see, or the price you pay for goods and services online.

Finally, algorithms have an important effect on our core democratic values. The explosion in the availability of information on the internet has resulted in a dramatic shift from an information economy to an attention economy. The ability to determine what that person’s valuable attention is focused on has a very powerful impact on their perception of the world. This is determined by algorithms that sift, select and promote content based on whatever priorities are hardwired into that algorithm, likely to be largely based on maximising user interaction.

Providing the proper regulatory framework for these algorithms will be vital to ensure their impact is fair, transparent and socially acceptable.

The regulatory focus on algorithms has been increasing. The Opinion from Germany’s Data Ethics Commission is interesting and provides one of the most structured proposals to date. It suggests risk-based tiering of regulation, as set out in the diagram below, and that these proposals should be implemented as a new directly effective EU Regulation on Algorithmic Standards. In summary, the Committee suggests: 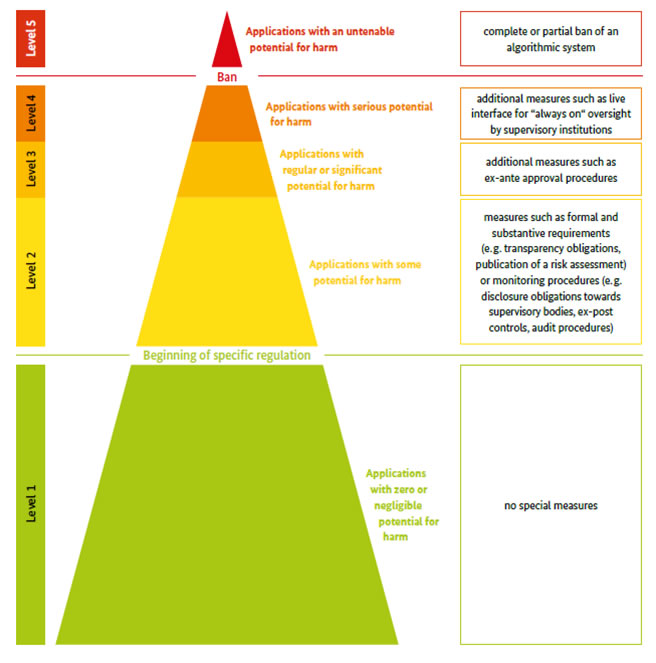 These are superficially attractive measures but how do you “regulate” an algorithm in practice. An algorithm is fundamentally different to a human being. It is not intelligent as such and does not share the same desires and motivations as a human. This means there is no digital equivalent to the “smoke filled room” in which the algorithm will incriminate itself.

Instead, many regulatory remedies will attach to the code itself or the operation of the algorithm. This raises some difficult issues.

A toolkit of strawman remedies

With these challenges in mind, we set out a range of strawman remedies and consider the extent to which they are already available or workable. This assumes that it is necessary to regulate the monkey and not the organ grinder. Where there is evidence the organisation deploying the algorithm intended it to have particular adverse effects, such as to discriminate or collude with competitors, detailed technical inspection of the algorithm may not be necessary.

Compliance: The least intrusive remedies would be to impose duties on organisations using the algorithms to take steps to ensure it is used safely and lawfully. It would be up to the organisation how to implement that duty:

Technical: Regulators might want to take more direct action and lift up the hood to supervise the technical operation of an algorithm. We consider some options below, though few are likely to be practical.

Algorithms are attracting the attention of multiple regulators and legislative bodies around the world. However, more could be done to co-ordinate this work and to conduct a systematic analysis of the challenges of regulation and thus help ensure algorithms are used in a fair, transparent and socially acceptable manner.

The added benefit of data mapping