On November 2, 2021, Ontario’s Independent Electricity System Operator (“IESO”) posted a draft of its Medium-Term RFP (the “Draft RFP”) under its Resource Adequacy Framework.

The Draft RFP sets out the process and criteria by which the IESO proposes to procure up to 750 MW of capacity from existing generating or storage resources via three-year commitments beginning in May 2026 (with optional two-year extensions).

The RFP in context

The Draft RFP forms part of a broader Resource Adequacy Framework under which the IESO aims to address a capacity need in Ontario set to emerge in the mid-2020s. The forecasted capacity gap arises from a combination of factors, most notably the retirement of the Pickering nuclear plan, the refurbishment of other nuclear generating units, and expiring generation contracts for certain existing facilities.

In contrast with the pending Long-Term RFP (stakeholdering to begin in 2022) which will aim to procure at least 1,000 MW of new and incremental capacity from both existing and new-build resources that can enter service between 2026-2028 for a seven- to ten-year period, the Draft RFP is geared toward addressing a specific forecasted capacity need limited primarily to already connected resources with or without expiring contracts.

What’s in the Draft RFP?

The full text of the Draft RFP is available here. Key requirements, deadlines, and evaluation criteria include the following (bold terms are defined in the Draft RFP): 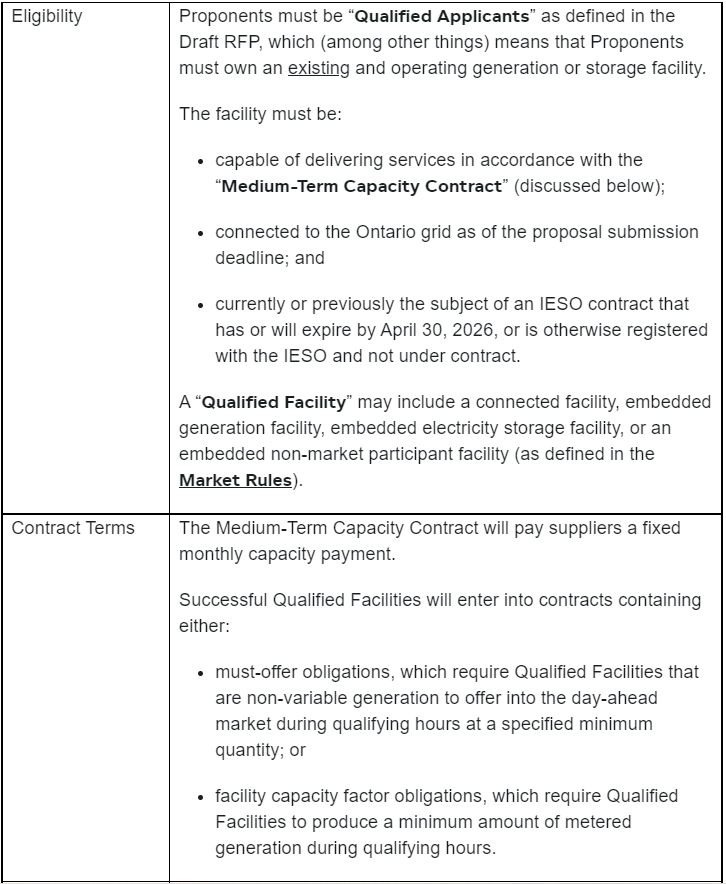 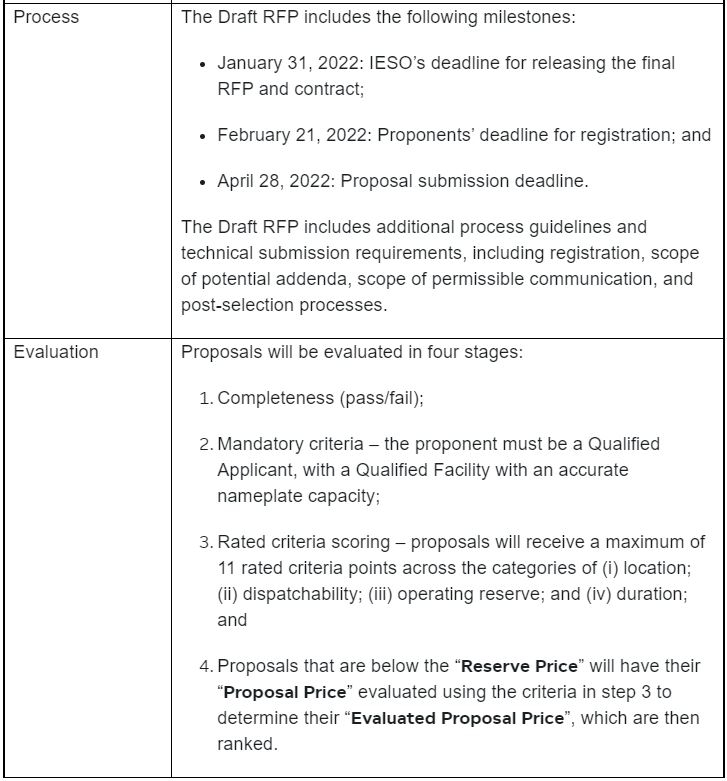 As the federal government and industry participants become increasingly focused on achieving net-zero, it is notable that the Draft RFP lacks any mandatory scoring or criteria related to emissions reduction. This reflects a continued need for clear guidance and direction from provincial government to the relevant agencies, including the IESO and Ontario Energy Board, on expectations and timelines for achieving net-zero in the electricity sector.

Although the Ministry of Energy has directed the IESO to, among other things, “develop an achievable pathway to zero emissions in the electricity sector” and to submit a report on same by November 2022, the authors submit that this timeline is too long and that clearer emissions-related procurement targets need to be established sooner.

By explicitly including storage alongside generation in the Draft RFP, the IESO does appear to be recognizing stakeholder input concerning the potential of storage resources to further decarbonize the Ontario grid, while boosting flexibility and maintaining efficiency and cost effectiveness.

Notwithstanding, there is arguably an opportunity to further integrate emissions-related criteria in the Medium-Term (and Long-Term) RFP. This need is particularly imminent given the potential for significant increased electricity demand in Ontario resulting from possible future broad based transport electrification and natural gas phase-out.