As pressure from local and supranational regulators mounts, state-aided banks seek to repair their balance sheets. Failure to act could result in a tailspin into financial distress

While rating agencies are beginning to show first signs of positive sentiment towards European banks, the shifting regulatory landscape continues to complicate M&A processes, making it challenging to find committed buyers. Against this backdrop, high levels of financial sponsor interest in stressed and distressed assets are a welcome source of new capital. Recovery is certainly possible, but not without significant uncertainty.

Q: There appears to be a steady flow of M&A involving state‑aided banks. Why are these deals coming to market now?

A: Governments are eager to offload stakes in banks bailed out during and following the financial crisis, which have since recovered. Local prudential regulators appear supportive of this policy and are facilitating opportunities to ready assets for sale and address potential buyer concerns. The EC, for example, has approved Portugal's restructuring plan for Novo Banco and a €5.4 billion state bailout of Monte dei Paschi. By offering this kind of support, regulators seek to provide certainty over various long-running issues that have dogged state-backed banks until now. This should facilitate exits.

Q: Given the fact that regulators are displaying more support, are M&A processes likely to be relatively straightforward from here on in?

A: Not quite. Some government exit strategies are coming under pressure, despite tacit regulatory backing. Government stability funds that have supported troubled banks have been stretched themselves and are focused on achieving a "clean break" from such assets.

Q: Why are auction processes being dragged out in the first place?

A: An uncertain regulatory environment is one reason. For example, the UK government is consulting on tougher measures related to bank mergers, while the EC has issued a new discussion paper stating that 19 foreign banks will need to improve regulatory oversight. Some buyers are reluctant to take the plunge until there is more certainty around these key regulatory issues. Other buyers, financial sponsors in particular, are demanding seller protections that governments are reluctant to offer.

Q: Where is the most deal activity taking place?

A: A number of state-backed banks, including ABN AMRO, UniCredit and Intesa Sanpaolo, are among many that have been able to strengthen their balance sheets by selling off large portfolios of NPLs. Others, like National Bank of Greece, which has made no fewer than six disposals this year, have exited non-core operations. There have also been several state-backed bank mergers, such as the tie-ups between Bankia and Banco Mare Nostrum in Spain. 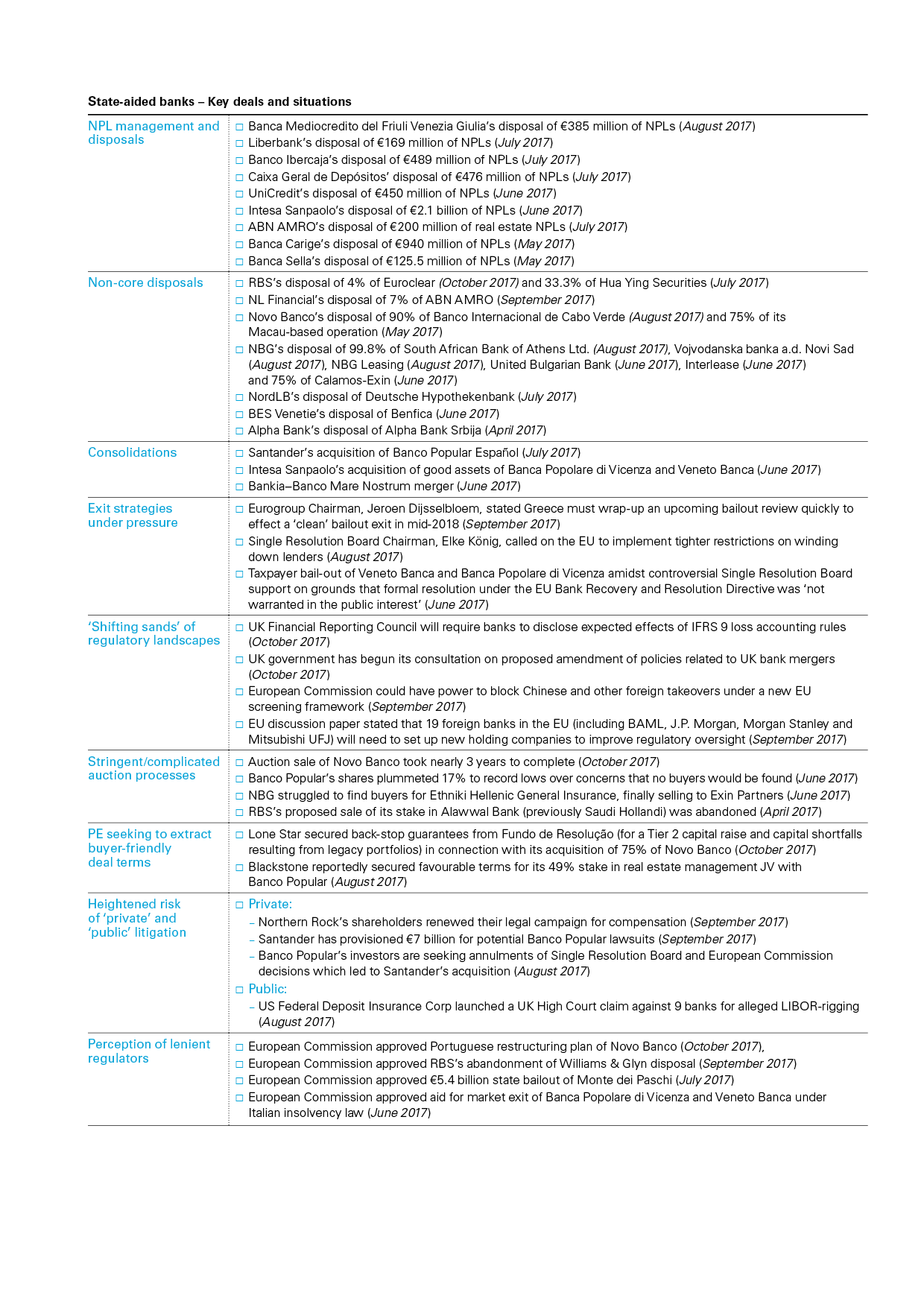