1. Substantial Increase in the numbers of IP Cases

According to the protection status report (as shown in Figure 1) in 2017, the total numbers of cases being newly received and concluded by the courts across the country are increased.

Figure 1. Newly received cases V. concluded cases in all China Courts in 2017 (including 1st instance, 2nd instance,application for retrial),and their increasing rate over 2016

With respect to civil First Instance Case of intellectual property, the number of copyright, trademark and patent cases were 137,267, 37,946 and 16,010 respectively, with an increase of 57.80%, 39.58% and 29.56% over 2016. With respect to the terrestrial distribution of the above IP cases, the number of cases received by courts in Beijing, Shanghai and Guangdong accounted for more than 50% of the overall number across the country, as shown in Figure 2. 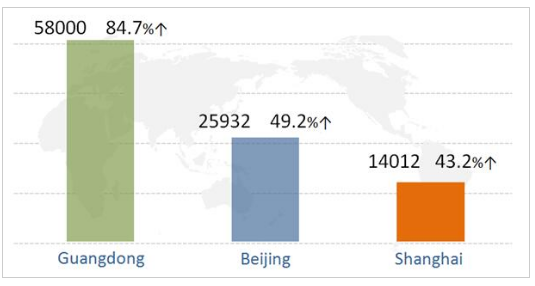 Figure 2. Newly received 1st instance cases in Guangdong,Beijing and Shanghai in 2017,and their increasing rate over 2016

Comments: From the first establishment of the Beijing Intellectual Property Court in 2014, after several years of endeavor, a total of eighteen IP courts/courtrooms have been established across the country with a jurisdiction of IP civil, administrative and criminal cases, such cases were previously governed by different courts (take Beijing as an example, such IP cases were previously governed by the first, second and third Intermediate people's Court). In another word, the reform of the IP judicial system at the first instance level has been generally completed (at present, IP appeal cases are still under the jurisdiction of various local high courts). The next step of the reform is to research on the establishment of the State Intellectual Property Court (similar to the Court of Appeals for the Federal Circuit, CAFC in the US), which is important to further unify trial standards.

4. Increase of penalties for IP infringements

The Judicial Protection Report pointed out that the protection of intellectual property rights has been fully strengthened in 2017. The Supreme Court emphasized that judicial work should be market-value orientated. That is to say, focus should be put on addressing the issue of low compensation for the IP infringement conducts, increasing the penalties of IP infringements, and increasing the illegal cost of the infringers.

Comments: From our experience, the average amount of compensation of patent infringement lawsuits increased significantly in the past few years. For example, the average amount of compensation decided by Beijing Intellectual Property Court was about 1.4 million (there were also some very high compensation records by different courts, such as 9.1 million (IWNComm V. Sony, Beijing IP Court), and 37.2 million (Goertek V. Knowles, Huaifang Intermediate Court)). We believe that the current trend of reform is to favor patentees and further increase damages. Specifically, measures such as increasing the upper limit of statutory damages for infringement as well as establishing a punitive damage system are all under consideration.

With respect to interpretation of claims, the Supreme Court pointed out (Dyson Technology Co., Ltd. v. Suzhou Suvac Electric Motor Co., Ltd. , 2017 Supreme Court Min Shen No. 1461) that in determining the meaning of a terminology in a claim, where the same patent applicant or patentee has made a clear statement of the same terminology during the patent right authorization and affirmation procedure of other patents that have the same priority as the patent in dispute, such statement can be referenced and considered. Previously, there was controversy around whether reference could be made to a statement in another patent of the same family which share the same priority. Here, the Supreme Court made it clear that such statements could be referenced and considered.

With respect to restrictions on applying the promissory estoppel principle, the Supreme Court pointed out (Cao Guilan, Hu Meiling, Jiang Li, Jiang Haotian v. Chongqing Lifan Automobile Sales Co., Ltd., 2017, Supreme Court Min Shen No. 1826) that when the promissory estoppel principle is applied, to determine whether the statement made by the rights-holder complies with the "explicit negation" prescribed in Article 13 of Interpretation II2, one should focus on whether the rights-holder's statement of narrowing the technical solution is finally accepted, and whether such statement leads to a patent application being granted or patent rights being maintained.

With respect to the technical aspects of a decision on an infringement, the Supreme Court pointed out (Liu Zonggui V. Taizhou Fenglilai Plastics Co., Ltd., 2017, Supreme Court Min Shen No. 3802) that properly dividing the technical features of patent claims is the basis for comparison of infringement. The division of technical features should be considered combining with the overall technical solution of the invention. Relatively small technical units that can relatively independently achieve certain technical functions and produce relatively independent technical effects should be considered.

With respect to whether a claim is based on specifications, the Supreme Court pointed out (Sensing Electronics Co., Ltd. V. State Intellectual Property Office Patent Reexamination Board, 2016, Supreme Court Xing Zai No. 19) that when determining whether a claim is based on specifications, one can identify the technical problems to be solved and the technical effects to be achieved in conjunction with the specifications ("defects in prior arts", "objectives of invention", "technical problems to be solved", "beneficial effects", etc., described in the background, summary, and detailed description). The "technical problems to be actually solved" redefined according to the distinguishing technical features of the claims and the "closest prior art" should not be directly used as the basis for determining whether the claims are based on the specification.

With respect to online shopping jurisdiction, the Supreme People's Court pointed out (Guangdong MARTNIEL Clothing Co., Ltd., Zhou Lelun V. New Balance Trade (China) Co., Ltd., 2016, Supreme Court Min Xia Zhong No. 107) that in intellectual property rights infringement cases and unfair competition cases, where a plaintiff purchased an allegedly infringing product through online shopping, it is not appropriate to apply Article 203 of the Interpretation of the Supreme Court on the Application of the Civil Procedure Law of the People's Republic of China, which uses the place of receipt as the place where the infringement occurred to determine the territorial jurisdiction of the case.

With respect to the nature of a Markush claim, the Supreme Court pointed out (State Intellectual Property Office Patent Reexamination Board V. Beijing Wansheng Pharmaceutical Co., Ltd., Daiichi Sankyo Company Limited, 2016, Supreme Court Xing Zai No. 41) that when a claim is drafted as a Markush claim, such claim should be considered as a general claim that defines multiple alternative elements, rather than a collection of numerous compounds. The general rule of allowing amendments to a Markush claim is that the amendments should not result a class of compounds or a single compound that possess new property or effect. However, it should be considered on a case by case basis4.