Rising inflation and climbing interest rates have slowed leveraged loan activity in Europe and the US, while COVID-19 restrictions in China dampened demand in Asia-Pacific

Leveraged loan markets across the globe faced a challenging first half of 2022 as macro-economic headwinds weighed on issuance in the US, Western and Southern Europe and Asia-Pacific. 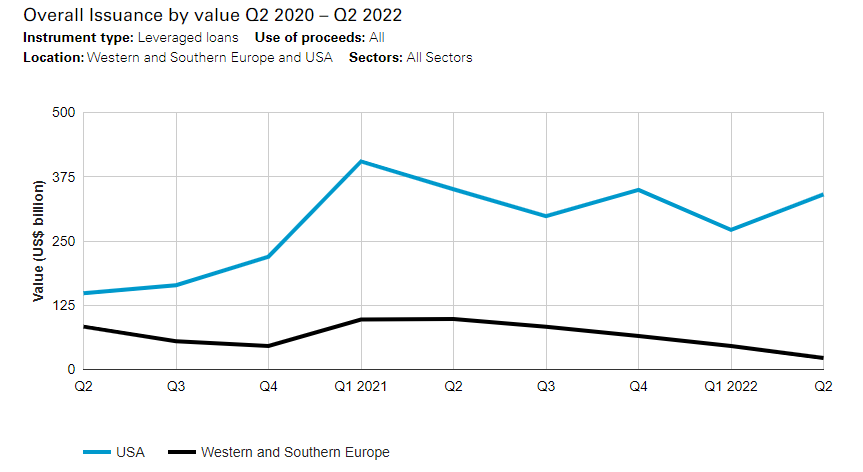 In the US, leveraged loan issuance for the first six months of the year came in at US$612.5 billion, down on the US$755.5 billion posted for the same period in 2021, though there was an uptick in activity in the second quarter of the year as markets revived.

Leveraged loan and non-leveraged loan markets in APAC (excluding Japan) also tailed off through the first half of the year, but to a lesser degree, with issuance coming in at US$176.4 billion for H1 2022, marginally lower than the US$178.8 billion recorded in H1 2021.

In Europe and the US, high inflation and rising interest rates, as well as softer stock markets, have seen loan investors pause for breath and adopt a more cautious approach.

The European Central Bank also increased its key interest rate by 0.5 percentage points in July to 0.0%—the first increase in 11 years, with further rate rises penciled in for later in the year.

As benchmark rates have risen, loan pricing has edged higher. According to Debtwire Par, prices for institutional loans in Q2 2022 reached the third-highest level in the past ten years, averaging 4.99% and only slightly below the 5.31% reached in the second quarter of the 2020 and the 5.23% recorded in Q1 2016.

While primary loan costs have increased, the prices of existing European loans in the secondary market have declined in the first half of the year, with the weighted average bid on all term loans down almost 10% from January to 87.66% of par by the end of June, according to Debtwire Par.

With borrowers reluctant to refinance existing debt at higher prices unless absolutely necessary, and lenders able to pick up existing loans at deep discounts to face value, European refinancing—a major driver of activity in 2021—has been particularly affected.

Issuance for European buyouts, although also down year-on-year, has proven more resilient. Despite a deteriorating macro-economic backdrop, cash-rich private equity firms have continued to seek out deals and secure finance.

While buyout deals continuing to go ahead, albeit at a slower pace, European buyout issuance was down by 34% year-on-year to US$22.1 billion H1 2022, compared to a 65% drop in overall loan issuance in the region.

In contrast to Western markets, inflationary pressures in APAC have been less acute, with inflation in China— the region’s largest market—running at around 2%, as opposed to inflation rates of more than 8% in the US and Europe.

China, however, has had to contend with a further round of pandemic restrictions following the largest wave of COVID-19 in 2022. This has prompted the World Bank to reduce its forecasts for economic growth in China by almost 1%, while Fitch Ratings notes that the APAC region has recorded the largest number of sector outlook revisions globally due to lockdowns as well as the impact of events in Ukraine.

In the face of these macro-economic and geopolitical headwinds, leveraged and non-leveraged loan issuance has declined in APAC, but at a much slower pace than in the US and Europe. Issuance in APAC (excluding Japan) for H1 2022 is down by less than 1.5% year-on-year, whereas European and US loan markets have seen sizeable double-digit declines.

The steady level of loan activity in APAC has been supported by issuers pivoting to bank loans away from the region’s bond markets, which have been more sensitive to events in Ukraine, rising interest rates in the US and dislocation in China’s real estate sector. Asian banks, by contrast, are cash rich and have been eager to lend in markets where interest rates on loans have been trending higher.

Bloomberg figures show that US$22 billion worth of SLLs completed in Asia in the first five months of 2022, more than double the total posted over the same period in 2021. In May, Syngenta secured the largest SLL ever recorded in Asia with a $4.5 billion deal.

There is still debate around the transparency and standards for Asian SLLs—a debate that is also very topical in Europe and the US—but with the market still nascent when compared to Europe and the US, and with governments in Hong Kong and Singapore offering incentives to reduce the costs of external oversight of SLLs, the space remains on a positive growth trajectory.