What in California Must an RME Do to Protect the Contractor’s License?

If the RME does not do their job, a Court could rule that, in essence, the contractor was unlicensed during the job and therefore, under Business and Professions Code § 7031 the contractor would be barred from recovering payment for its work and could be ordered to disgorge all amounts paid on the entire job.

Clearly, in the situation at hand, respondents did not receive ‘the full protection which the statute contemplates,’ which is work performed by or under the supervision of a licensed contractor. It is concluded that the trial court did not err in its decision that the present action was barred by section 7031. (Weeks v. Merritt Bldg. & Constr. Co. (1974) 39 Cal.App.3d 520, 525.)

Weeks’s surety was not permitted to recover payment work done by its principal because the surety finished the work under Weeks’s contract, but without RME Weeks or a replacement RME after Mr. Weeks suffered a heart attack and could no longer perform.

So, What Does an RME Have to Do to Protect the Right to Payment?

Until January 1, 2022, the RME had to exercise direct supervision and control of the Contractor’s construction operations to secure compliance of Business & Professions Code Chapter 9. Chapter 9 contains much of the laws regulating the licensing of contractors in the state of California, including:

What is “Direct Supervision and Control”?

So, it would seem that the RME could do their job by:

A Sacramento Superior Court Judge, however, disagreed with this view and vacated an arbitrator’s determination that RME McCosker had, like any contractor with multiple projects, properly done his job by supervising company operations, generally, saying:

RMEs are required to supervise the specific project at issue. As outlined in the May 4, 2018 order, the Court has reviewed the applicable statutes and case law and determined that the RME is expected to have involvement in the work for which he or she serves as the qualifier (including some level of supervision of the project at issue), and mere involvement in the business generally does not suffice. (Emphasis added.) (D.A. McCosker Construction Co., et al. v. California Department of Water Resources, Case No: 34-2017-00209945-CU-PT-GDS, Minute Order dated May 17, 2019, p. 16.)

The trial judge went further and ruled that the RME’s failure to do enough supervision invalidated the contractor’s license and barred the contractor’s $5 million recovery. Court declined to order the contractor to disgorge all payments made by the Department to it, finding that a request for disgorgement had not been properly raised. However, given the Court’s statements, it seems probable that the Court would have ordered disgorgement of all prior payments had the request been properly made.

This case, striking fear in the hearts of many California contractors, is now on appeal. D.A. McCosker Construction Co., et al., Appellants and Cross-Respondents, v. California Department of Water Resources, Respondent and Cross-Appellant, No. C089969, August 3, 2020.

The California Legislature Comes to the Rescue!

The Assembly Committee on Business and Professions sponsored, and Representative Flora introduced AB 830 on February 17, 2021:

This bill is an omnibus vehicle, authored by the Vice Chair of the Assembly Committee on Business and Professions and intended to enact minor, technical, or noncontroversial proposals relating to licensed professions and businesses within the committee’s jurisdiction.

Without fanfare, AB 830 amends section 7068.1 to allow delegation of direct supervision and control by an RME, and yet Assembly legislative analysis did not even mention this provision until after the bill returned to the house of origin following approval by the Senate.

Notably, amended subsection (a), above, removed the requirement that supervision and control be “direct,” and subsection (c)(3), below, specifically allows delegation of RME duties: 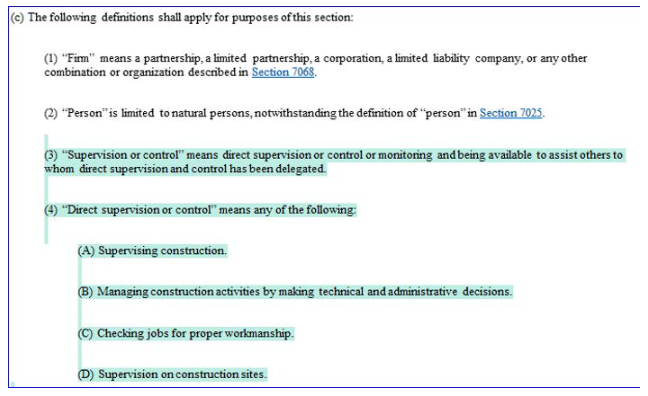 AB 830 also modified subsection (d) to require a new “employment duty statement” (“EDS”) for the RME signed by the employer or principal of the employer:

The CSLB website provides no help. There is no mention of such a statement there or in application forms for new licenses or renewal of licenses. The CSLB has authority to modify its application forms and should do so in the future, since amended 7068.1(d) mandates that the board require applicants or licensees to provide EDSs.

In the meantime, however, per 16 CCR § 816, “Nothing in this Rule shall be interpreted to limit the Registrar’s authority to require an applicant to provide any other information necessary to determine the applicant’s qualifications, or to exempt the applicant therefrom, or to enforce the provisions of the Contractors License Law, except as otherwise required by law.” Accordingly, nothing prohibits the CSLB from asking for a Contractor’s EDS at any time, and it is a violation of 7068.1 to fail to provide the EDS upon request. Thus, all licensees would be wise to prepare an EDS and keep it on file. However, since the application forms do not require EDSs, they need not be sent to the CSLB unless the CSLB specifically requests them.

What should be in the EDS?

Recall that the contractor’s RME is required to oversee the contractor’s construction operations to secure compliance with all of Business & Professions Code Chapter 9, including the laundry list of rules above. The wise contractor’s EDS would include language incorporating Chapter 9’s requirements, either generally or specifically, and the RME’s job description should be harmonized with the EDS to ensure that the RME’s job duties include such responsibilities and provides a mechanism to hold the RME accountable to ensure that such responsibilities are fulfilled. To the extent that the RME delegates any of the supervisory responsibilities, such delegation and accountability for delegees should be included in the job description.

Contractors need to be wary, however, in drafting the EDSs and RME job descriptions. Not only must contractors be ready to satisfy the CSLB’s concerns that the RME adequately supervises the contractor’s operations, but also contractors should be concerned that in the event of litigation or arbitration, opposing counsel may seek the EDS and job description in discovery, with the goal of invalidating the contractor’s license as in McCosker. Too much detail may give opposing counsel ammunition to use against the contractor’s RME – envision the RME being cross-examined on how, when, and where they or their delegee performed each and every listed duty. The RME will need to be able to show how each responsibility was satisfied. For this reason, less may be more.