On September 29, 2021, by a vote of 4-1, the U.S. Securities and Exchange Commission (SEC) proposed to expand the information that mutual funds, closed-end funds, exchange-traded funds (ETFs), and other registered investment companies must disclose about their proxy votes.1 Among other things, the proposed rules would require funds to tie the description of each voting matter to the issuer’s form of proxy and categorize each voting matter. In addition, any person who files Form 13F (known as an “institutional investment manager”) would be required to file Form N-PX to begin reporting proxy votes for the first time but limited to say-on-pay votes. The SEC says the changes would help investors to identify votes of interest and compare voting records, thereby increasing transparency. Public companies, institutional shareholders, funds, and investment managers all would be affected and will have potentially different views and interests as the rulemaking proceeds.

The proposed requirements for reporting say-on-pay votes would complete rulemaking originally begun in 2010 in response to a direction to the SEC from Congress in the Dodd-Frank Wall Street Reform and Consumer Protection Act.2 Had the SEC limited itself to the mandated say-on-pay rulemaking, there likely would have been little debate among the Commissioners. Instead, the decision to revisit and expand Form N-PX generated significant discussion.

One Commissioner voted against the proposed package in its entirety based on a philosophical objection that Form N-PX already provides more information about proxy voting than is warranted by actual levels of interest in the topic by fund investors.3 Another Commissioner voted in favor of proposing the rules but pointedly said his vote should not be taken as support for final rules unchanged from the proposal. His statement highlights reservations with respect to (1) the proposed taxonomy for categorizing proxy proposals, which he said would be difficult to administer and could become dated almost as soon as published, and (2) the proposed requirement to report when securities are not voted because they are out on loan, which he said can give the impression that not recalling securities to vote them is problematic when it should be in the discretion of individual firms to reach their own judgments on the value of the vote.4

Under the proposal, any person who files Form 13F also would now be required to file an abbreviated version of Form N-PX to disclose say-on-pay votes.5 An institutional investment manager would report annually on Form N-PX how it voted proxies relating to shareholder advisory votes on executive compensation matters over which the manager exercised voting power to influence a voting decision.6 If a manager did not exercise voting power over any securities that held say-on-pay votes during a given reporting period, the SEC proposes to require that the manager file a Form N-PX affirmatively stating this fact.

Importantly, the SEC suggests that a determination not to vote is itself the exercise of voting power, so that each such nonvote would be reported. This is notwithstanding comments to the original 2010 proposal noting that certain types of managers, high-frequency trading firms being a prominent example, may have determined and disclosed to their clients that they will not vote proxies.7

While being a reporting person for purposes of Form 13F triggers the potential application of these proposed rules for institutional investment managers, elements of the proposal deviate significantly from Form 13F. For example:

There are also three proposed versions of optional joint reporting that are broadly familiar to Form 13 filers and are intended to reduce duplicative filings. These would permit (1) a single manager to report say-on-pay votes when multiple managers exercise voting power; (2) a fund to report its say-on-pay votes on behalf of a manager exercising voting power over some or all of the fund’s securities; and (3) affiliates to file joint reports on Form N-PX notwithstanding that they do not exercise voting power over the same securities. In all three cases, when another reporting person reports say-on-pay votes on a manager’s behalf, the report on Form N-PX that includes the manager’s votes would be required to identify the manager (and any other managers) on whose behalf the filing is made and separately identify the securities over which the nonreporting manager exercised voting power. The manager’s report on Form N-PX also would identify the other managers or funds reporting on its behalf.

Currently, funds report only on matters as to which the fund was entitled to vote. The SEC proposes to apply the entitled-to-vote standard to portfolio securities on loan as of the record date for the meeting because the reporting person (whether fund or manager) has the ability to recall and vote them.

Further, under the proposal, the SEC would require disclosure of the number of shares voted and the number of shares loaned and not recalled for voting as of the record date of the meeting. This would include scenarios when the securities are loaned directly or indirectly through a lending agent but not when the manager is not involved in lending shares in a client’s account.

4. Other Aspects of Amended Form N-PX

Funds offering multiple series of shares (sometimes called series trusts in which each series is its own fund having its own investment program and shareholders) would provide Form N-PX disclosure separately by series. The SEC observes that this is a current requirement, but some funds simply note which series voted on which matters rather than organizing the entire report on a series-by-series basis.

The SEC also proposes to amend the current requirement in Form N-PX that funds identify whether a matter was proposed by the issuer or by a security holder to also require funds to identify whether such matters are proposals or counterproposals. A technical amendment to Form N-PX would require reporting persons to disclose whether each reported vote was “for or against management’s recommendation” (as opposed to “for or against management” as the form currently states).

Finally, to improve access to the information, reporting would be subject to structured data (electronic “tagging”) requirements. Fund reporting also would be required to be available on a firm’s website instead of filed solely with the SEC as today.

Proposed compliance dates would vary depending on when the amendments become effective but in general would provide that reporting be made only for periods six months after the effective date of the new form. The SEC offers several examples in the release, with the earliest presumed effective date being February 1, 2022, which would trigger reporting of votes occurring six months later, commencing August 1, 2022, for the reporting period commencing July 1, 2022. Because reporting under Form N-PX is made on a July 1–June 30 cycle, this example results in the first public reporting being for the 12-month period ended June 30, 2023, with the form due August 31, 2023. Notably, for managers who exceed the Form 13F reporting threshold during a calendar year (Y), as their initial Form 13F to report their fourth quarter of Y positions is not due until February 14 of the following year (Y+1), the SEC proposes that their initial Form N-PX reporting cycle will begin July 1 of Y+1, with their initial Form N-PX due August 31 of Y+2.

The proposed rules may appear to be technical, but they present fundamental questions around the value of this kind of reporting (and from that, who should be required to report and in what kind of detail).  Nor can disclosure ever be assumed to be purely neutral.  Practices may evolve in response.  For example, would the new securities-on-loan reports affect securities lending markets, or would operational burdens associated with proxy voting (again, just tracking say-on-pay votes would be a challenge for some managers) affect the relationship between investment managers and clients?  There also are real prospects for confusion in aspects of the proposal — notably the proposed categorization requirements and the interplay between Form 13F rules and practices and those under Form N-PX. In this regard, the extension of scope to include Form 13F filers certainly will capture persons unfamiliar with Form N-PX, including certain hedge fund managers, family offices, and companies that manage their own pension funds. 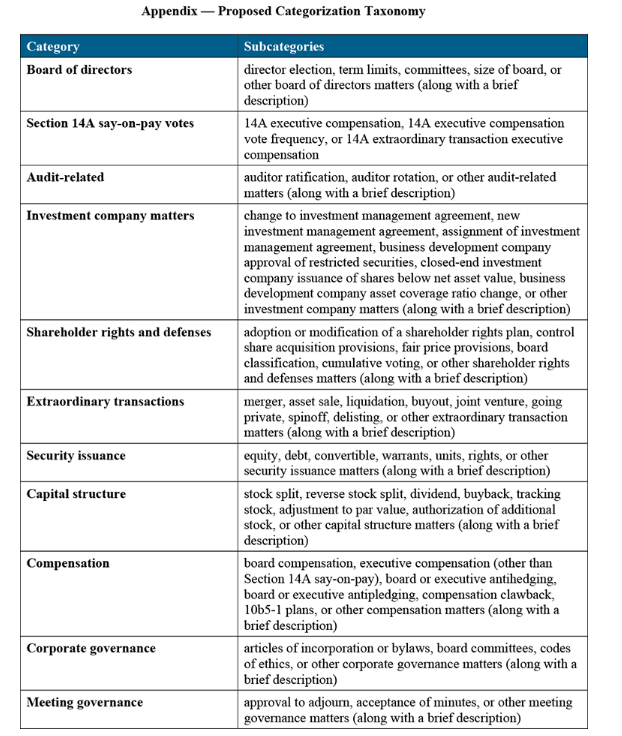 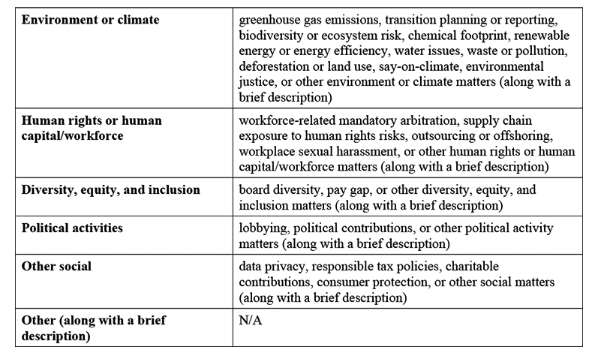